For additional background on the situation in Libya, ER recommends this report by Sibel Edmonds at Newsbud from August of 2017, Newsbud Exclusive – Israel’s Mossad Replaces CIA as Handler of Libyan Strongman Khalifa Haftar. This 2017 report from the Ron Paul Institute, Libya Report: New Wrinkle in US Plan For Gaddafi-Free Libya, describes how a combination of Saif al-Islam Gaddafi – popular with Libyans – and Haftar, viewed increasingly with suspicion by the West for engaging in talks with Russia, may be the imperfect combination that they are forced to go with.

Over the last months, we have heard three breaking reports about Libya: Saif al-Islam Gaddafi has decided to run for the Libyan presidency in 2018, some 10bn euros of Libyan assets have disappeared from Euroclear Bank, and former French President Nicolas Sarkozy has been detained in Nanterre. Sarkozy is charged with taking as much as 50,000,000 EUR in cash from Libyan leader Muammar Gaddafi when running for the French Presidency in 2007 – twice as much as he was allowed to spend on his campaign.

As a result, after seven years in the shadows, Libya has come back into the spotlight.

The last breaking news about Libya was the murder of Muammar Gaddafi.

Gaddafi had to die…

And not only because Libya has oil. Gaddafi had too many ambitions, gold and water. And also oil.

His ambitions helped him to turn the Great Socialist People’s Libyan Arab Jamahiriya (this is how Libya was called under Gaddafi) into a successful socially-oriented state, where a doll was 900 Libyan dinars, while one liter of petrol cost just 0.18 LYD.

Gaddafi was the first to move away from USD and EUR. At that time, neither Russia nor China could afford that. In 2010, Gaddafi suggested establishing a united African state, where 200 million people would use a single currency – the gold dinar. Africa welcomed that idea, unlike Europe and the United States.

It was Gaddafi who carried out Great Man-made River (GMMR), a $28bn project to pump drinking water from Nubia to the north of Libya. That project made Libya much worthier. And no single European or U.S. company was involved in it – only Dong Ah Construction from South Korea and ENKA from Turkey.

On Sept 1, 2010, when launching one more pipeline of GMMR, Gaddafi said that that achievement would certainly annoy the United States. And he was right: on Feb 15, 2011, a revolt in Benghazi grew into a civil war and cost Gaddafi his life.

Nobody dares to talk about the gold dinar or a united African state any more.

Ahmed Gaddaf al-Dam, Gaddafi’s cousin, says that all that was left inside Libya has been robbed. And Bloomberg recently confirmed his words when reporting that the Great Man Made River Authority, the operator of the GMMR project, carried out no single transaction in 2017-2018 and even had no data on its managers.

For as many as three years after Gaddafi’s death, those who killed him were deciding who was the boss in Libya and once they decided, they began fighting each other. As a result, today Libya is divided into three historical zones: Tripolitania, Fezzan and Cyrenaica. Fezzan (ancient Phazania) is located in Sahara and is populated by Tuareg and some other nomadic tribes. In Sept 2013, they said that they would protect their borders and natural resources on their own. As a result, Fezzan has turned into an autonomy, whose leaders are doing exactly the same as they did in the time of Hannibal: they are watching the fight of the key rivals (Tripolitania and Cyrenaica) so as to join the winner.

The official ruler of Tripoli is the UN-recognized Government of National Accord (led by Prime Minister Fais Sarraj), but de facto it has no authority: Misrata, Zintan, Derna and other municipalities are ruled by Islamist military councils, with the Government of National Accord having no influence on them. For example, the Zintan-based Abu Bakr al-Sadiq brigade refused to extradite Gaddafi’s son, Saif al-Islam Gaddafi, to Tripoli and in Apr 2016, even set him free despite Tripoli’s verdict that he had to be shot.

According to former Israeli Interior Security Minister Shlomo Ben-Ami, today Tripolitania is in the hands of myriads of armed gangs, sponsored by international Islamist organizations, Qatar and France.

In Cyrenaica, the official ruler is the Tobruk-based House of Representatives, led by Saleh Issa and backed up by the Libyan National Army and its commander Khalifa Haftar (pictured). In other words, Cyrenaica is facing a situation that is inevitable at the time of a civil war – power is going into the hands of military men. 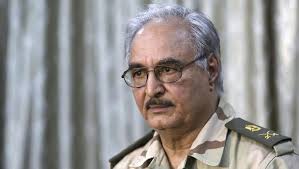 According to Anas El Gomati, today Haftar controls the whole of Cyrenaica and even the “tribal chaos” zones of Central and Western Libya. And even more, among his allies is the Tripolitania-based Abu Bakr al-Sadiq.

Until recently, relations between Tripolitania and Cyrenaica have been regulated by an agreement signed in Moroccan Skhirat in Dec 2015. That agreement stipulated that Libya should be ruled by a presidential council, where Tripolitania, Fezzan and Cyrenaica should have three members each. That agreement failed to keep Libya away from a civil war. On Dec 17, 2017, Haftar declared it invalid. Now, the war should heat up again or…

… or Haftar has a plan. On Dec 13, 2017, Foreign Minister of the Government of National Accord Mohamed Taha Siala said that Libya would elect the President by the end of 2018. Theoretically, Haftar should have objected but instead he said yes to Saif Gaddafi’s bid for presidency.

So, very soon we may see Haftar and Gaddafi forming a bloc, and if they do, that bloc will have a great chance to win the race. Saif Gaddafi is not just a reminder of the safe and secure times of his father, Muammar, and a heartbreaking picture of the death of his brother, Mutassim, but also the votes of those supporting the ideas of the Al Fateh Revolution, a coup that brought Gaddafi into power in 1969. He also has almost 70,000 former fighters who are now in Tunisia and Egypt and his sister, Ayesha Gaddafi, who enjoys the allegiance of one of Libya’s biggest tribes, Warfalla. And also thousands of political prisoners.

In his turn, Haftar is the army, has contacts among the Libyan tribes and may signify a drift towards Russia, who may help him with arms. For the moment, Libya is restricted by a UN resolution banning any military deliveries to the country, but in the present-day world resolutions are respected only by those who have no strength to break them. France did it almost immediately: in May 2011, it began supplying Libya with missile launchers, assault rifles, machine guns and Milan anti-tank missiles. Until then, the arms had been supplied from Qatar and some other Gulf monarchies (Le Figaro, June 28, 2011). So, Russia may feel free to do the same, especially as “in exchange” it may get a military base in the territory of Libya and a chance to control the Central Mediterranean.

If we accept the scenario that Haftar may form an electoral bloc with Gaddafi Jr., we may find an answer to the question about the lost 10bn EUR. That money was in four accounts opened for the Libyan Investment Authority, an agency managed by Hassan Ahmed Bouhadi, a man of the Tobruk Government (in other words, Haftar). So, it might well have been taken for the needs of Tobruk.

As regards Sarkozy and his problems, what else can be better for Cyrenaica – especially before the elections – than to prosecute a man whose ill will has destroyed Libya, especially if that man is from France, a country patronizing Tripolitania!? 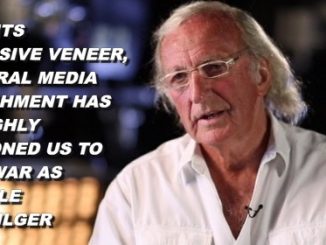 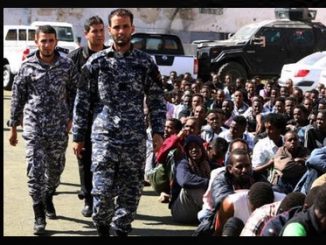 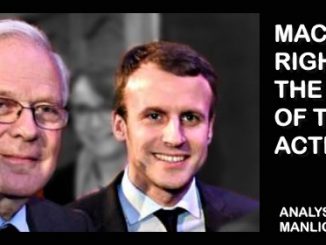