Dr. Jordan Peterson’s excellent talk, hosted by Michael O’Fallon of Sovereign Nations, was given last year, titled Identity Politics and The Marxist Lie of White Privilege. It is supremely worth our time, and helps us understand the mentality we see today among young people, especially on university campuses, of anger, resentment and an unwillingness to listen to reasoned argument. It also helps us understand how Marxist thinking has been culturally passed along, definitely by stealth, by the Establishment using universities as their vehicle. As Peterson notes, what is happening now in terms of polarization is the consequence of a very serious war of ideas that’s been going on for at least the last 100 years.

Anticipating one of his ideas, about the deliberate breakdown of our society, we can see that ‘inclusive’, multicultural societies promoted by Soros’ Open Society Foundations and the phenomenon of forced mass migration many western countries are currently experiencing play well into this ideology.

Here I’ll relay some of his key ideas, which will only have justice done to them if we listen to Peterson’s full explanation (see video below).

Suffering does indeed exist on a very real level for everyone. We must acknowledge that some certainly do have more privilege than others, and some suffer immensely in a variety of ways. Life is evidently difficult and often unjust. The Western, Christian idea of suffering puts it at the very centre of life, as a given in the way things are (think: Adam and Eve’s expulsion from the Garden, Christ on the cross). Suffering therefore isn’t necessarily caused by someone else; it doesn’t have to be somebody else’s fault and most likely isn’t. Life is a constant and personal struggle to overcome suffering and prevent future misery by working hard to provide for a better future. There’s no utopia, just individual struggle and personal responsibility.

2. What motivates Marxists and people who apparently work for the welfare of the poor? Is it sympathy and goodness, or is it another type of motivation? The millions of deaths as a result of

various Communist regimes around the world answer the question perfectly well. The motivation is resentment and hatred towards others. Adopting the correct ideology doesn’t make you good; good intentions can mask dark purposes. Solzhenitsyn’s (pictured) accounts of the gulags had destroyed the illusions about Communism by the early ’70s, but intellectuals right up to that point were simply not critiquing it fairly, despite knowing about the horrendous consequences for many millions of people.

Postmodernism does the following:

Opposing the idea of social construction, Peterson notes how many factors exist which naturally differentiate us from each other: level of intelligence, character traits, geography or where we’re 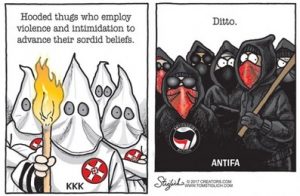 born/live, historical position in time, beauty or lack thereof, whether we’re young or old, health status, sex, athleticism, wealth, family structure, whether we have friends or not, our level of education, and our race.

But race has become a feature of today’s postmodernism, a key indicator of difference. Why? Is it because it’s more clearly associated with oppression? It’s not obvious.

Identity Politics has targeted race, in particular being white. Peterson shows us a list of alleged White Privileges put forward by university intellectuals, and poses the question, ‘why isn’t this MAJORITY privilege instead of WHITE privilege?’ Living in a homogeneous culture is usually comfortable for people everywhere, so why has this become a bad thing (according to the list of White Privileges)?

This way of thinking BREAKS UP SOCIETY and that is exactly the point!

We need to get back to the idea of the INDIVIDUAL speaking the TRUTH. We need to pass on the idea of personal struggle and personal responsibility to young people, who desperately need to hear this message. Identification with a group leads to anger, resentment and personal weakness because we see ourselves merely as victims. Should we complain in the face of inevitable suffering and blame somebody else, or should we face up to the difficulties, shoulder the burden and become stronger?

Sovereign Nations was honored to have Dr. Jordan B. Peterson address the thesis “Identity Politics & The Marxist Lie of White Privilege” to guests gathered at the Sovereign Nations Conference at the Trump International Hotel in Washington, DC.  Dr. Peterson’s presentation served as a pillar to the overall theme of the conference: Understanding the Causes of Things.

A Canadian clinical psychologist and professor of psychology at the University of Toronto, Dr. Peterson presented the case for taking personal responsibility over blaming others for one’s personal status in life. The accusation of “white privilege” is a fertile fallacy wrapped in the self-righteous robes of “social justice” as it reduces cultural and social issues down to immutable characteristics as opposed to individual decisions and responsibilities.

Dr. Peterson’s thesis centered around that historical revelation that communism was not popularized in the West under the obvious and direct banner of communism. Instead, it came largely under the banner of postmodernism, and aimed to transform the values and beliefs of our societies through its Marxist idea that knowledge and truth are social constructs. Under these false presuppositions, a new wave of skepticism and distrust was applied to philosophy, culture, history, and all beliefs and institutions at the foundations of Western civilization.

The postmodern philosophy “came into vogue” in the 1970s, according to Peterson, “after classic Marxism, especially of the economic type, had been so thoroughly discredited that no one but an absolute reprobate could support it publicly.”

Peterson said it’s not possible to understand our current society without considering the role postmodernism plays within it, “because postmodernism, in many ways—especially as it’s played out politically—is the new skin that the old Marxism now inhabits.”

“Even the French intellectuals had to admit that communism was a bad deal by the end of the 1960s,” he said. From there, the communists played a “sleight of hand game, in some sense,” and rebranded their ideology “under a postmodern guise.”

The Marxist concepts of the “oppressed and the oppressor” continued to manifest themselves in countless ways eventually leading to the coining of the phrase “white privilege” by Peggy McIntosh in the late 1980s.  Eventually, the neo-Marxist concept of “white privilege” evolved into social doctrine within progressive political camps.  Even more concerning is that the fallacy of “white privilege” has found its way in through Reformed Christian circles and into the two largest Protestant denominations in the United States: The Southern Baptist Convention and The Presbyterian Church in America.

Those present at the lecture were charged with the responsibility to learn about the root cause of the current uses of intersectionality to divide our nation and destroy Western civilization.

Peterson’s numerous references to the “previous speaker” allude to Summer Jaeger’s preceding presentation at the Sovereign Nations Conference, ‘Why Feminism Can’t Save You.’ Mrs. Jaeger’s speech also touched on the problems created by intersectionality and identity politics.

Please invest the time to watch this foundationally important presentation by Dr. Jordan B. Peterson.

Major Red Flag: Big Pharma firms will NOT be held accountable for side effects of Covid vaccine