Back on March 4, the Euro was spooked and Italian bonds tumbled, if only briefly, following the shocking outcome from the Italian elections which saw the eurosceptic 5-Star party and the anti-immigrant League party win an outright majority. The only thing that prevented an even more violent reaction was the market’s “expert” take that a joint Italian government between these two forces was highly unlikely. 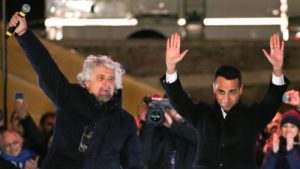 Well, as of this moment, a coalition government between the anti-establishment 5-Star Movement and right-wing League party is no longer not only likely, but appears to be a virtual certainty after the two political forces reached an agreement on a government program, one which was catalyzed by Sylvio Berlusconi’s blessing late last week, greenlighting what may be the biggest shock in European politics since Brexit.

As the WSJ frames it, “the formation of a new government—which is expected in the coming days—between the two groups marks one of the biggest wins yet for the political insurgencies shaking Europe’s establishments.” The alliance between the two parties follows more than two months of bickering among political leaders following March elections that handed no clear majority to any single party or coalition. 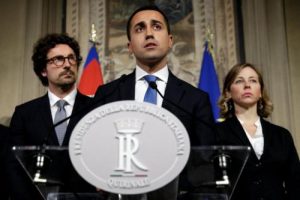 And since both parties have, at their core, an anti-immigrant platform, Angela Merkel can pat herself on the back for yet another job well done, by unleashing the unprecedented anti-immigrant, populist revulsion wave which swept across Europe with the chancellor’s “open door” policy to admit over 1 million mostly Syrian refugees inside Germany’s, and Europe’s, borders.

As the WSJ details, the two parties struck a deal Sunday evening on a pact that would underpin a government coalition between the two.

Leaders of the two groups, however, are still negotiating the members of a government cabinet, including the prime minister. An announcement of those names should come early this week, according to weekend statements by leaders of both groups.

With the general agreement now reached, leaders of 5 Star and League will meet on Monday with Italy’s President Sergio Mattarella, who will guide the formation of a new government. And while the coalition must then win votes in both houses of parliament, that shouldn’t be a problem as the League and 5 Star together enjoy a comfortable majority in each house.

Meanwhile, as we described earlier, the coalition agreement includes measures such as a universal basic income for the unemployed, a rock-bottom flat tax, and the revocation of a sweeping pension reform introduced in 2011.

To be sure, what happens next is unclear as Italy’s soon-to-be-governing coalition has made economic promises that seem incompatible with Europe’s fiscal rules and will be hard, if not impossible, to keep or even implement. These, as Reuters details, include:

Yet while these two pre-election adversaries spent the last few days trying to meld their very different programs into a “contract” of mutually acceptable policy commitments, what they have in common is that they are extremely expensive.

On the face of it their plans, which they say may also include a form of parallel currency, could push the budget deficit far above targets agreed with the EU, setting up a clash with the European Commission and Italy’s partners.

“We will need to renegotiate EU agreements to stop Italy suffocating,” League leader Matteo Salvini said on Saturday after a day of talks with his 5-Star counterpart Luigi Di Maio. Separately, 5-Star’s flagship policy of a universal income for the poor has been costed at around 17 billion euros ($20 billion) per year. The League’s hallmark scheme, a flat tax rate of 15 percent for companies and individuals, is estimated to reduce tax revenues by 80 billion euros per year.

That’s just the start of the new costs: scrapping the unpopular pension reform would cost 15 billion euros, another 12.5 billion is needed to head off the planned hike in sales tax. But the biggest wildcard is that the parties are considering printing a new, special-purpose currency to pay off state debts to firms.

It is entirely unclear how any of that can happen, or be approved, under existing the European framework.

“If implemented, it would be the biggest shake-up of the Italian economic system in modern times,” said Wolfgang Munchau, head of the London-based Eurointelligence think-tank.

But just how “anti-establishment” will the coalition be?

Well, prior to the election, 5-Star and the League both blamed the EU’s fiscal rules for Italy’s chronically weak growth and rising poverty, and promised to defy Brussels by spending more if they managed to enter government. However, since then the parties have used less strident tones, and a 5-Star official said on Friday any plans to raise the budget deficit will first be discussed with Brussels in a “courteous” way.

Furthermore, whereas the outgoing administration promised the fiscal deficit would fall this year to 1.6% of GDP from 2.4% in 2017, and then drop to 0.8% next year with a balanced budget in 2020, 5-Star leader Di Maio said that he would hold the deficit at 1.5%, having previously pledged to raise it above the EU’s 3% ceiling to allow extra spending on public investments.

His latest position is still not consistent with Italy’s commitment to balance its budget, and also out of line with the more confrontational stance of the League. “The goal to balance the budget has destroyed our economy,” said League senator Alberto Bagnai, a eurosceptic economist. Incidentally, the League wants to raise the deficit to 2.8% this year and to 3.0% in 2020. Bagnai said negotiation would be needed to find common ground on the matter with 5-Star.

To be sure, some of the parties’ negotiators now suggest a more pragmatic approach will probably prevail, by implementing their pre-election proposals only partially and gradually. In the face of voter disappointment, each group will be able to say it was forced to compromise with its partner. Even so, it is still unclear how all this will square with Italy’s commitments to reduce its budget deficit and its public debt, which at more than 130% of gross domestic product, is the highest in the eurozone after Greece.

Worse, growing signs of an economic slowdown will make the new government’s task even harder. Industrial output stagnated in the first quarter and business confidence fell in April to a 14-month low.

In fact, the only thing Italy may have going for it is that Italy’s borrowing costs are currently the lowest on record, despite the political storm clouds that are about to be unleashed. But that will only persist as long as the ECB is active in the market, soaking up any Italian bonds offered for sale.

Commenting on the Italian developments, Barclays over the weekend said that news of a coalition among the anti-system parties quickly brought investors’ attention back to Italy, and that should the economic policies disclosed in the campaigns be enacted, “this outcome would very likely be negative for markets and a direct challenge to the European fiscal compact.” To wit:

[The two parties] campaigned on a number of expensive fiscal promises, including the roll-back of the pension reform, the implementation of a universal income and a flat income tax. Altogether, these measures would cost about EUR100bn, according to our preliminary estimates.

Without offsetting fiscal measures, this outcome would very likely be negative for markets and a direct challenge to the European fiscal compact. While market positioning, decent growth and QE have cushioned Italy from an adverse market reaction thus far, growth needs to remain supportive for the fiscal position to be sustainable and prevent history from repeating itself 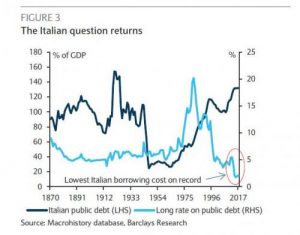 The good news for Italy, at least for now, is that the ECB’s QE continues to monetize virtually all Italian net bond issuance, making the likelihood of a crash remote. That, however is also the biggest problem facing Italy because, as we have shown previously, for well over a year, the only marginal buyer of Italian debt was the ECB.

As Citi said last December looking at the future of Italian bonds, it is “pretty likely that there will need to be an adjustment in prices” once the the ECB’s purchases of Italian bonds start to fade, resulting in an exponential jump in risks. Quote Citi:

To our minds, this remains one of the most significant political risks to € credit in 2018. Most likely the spillover on credit would be concentrated on Italian and other periphery names, banks in particular. The scenario of a full-on  funding crisis is a much lower probability in our view, but would obviously have more systemic implications across the € credit market.

And, as we said last week, “a governing coalition between the Five Star and the League is all that would take to launch the first steps of this funding crisis.” The only question is when will the market react accordingly and “price out” the soothing effect of the ECB? 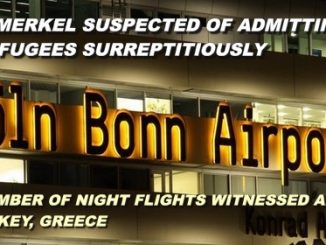 No More Room for Dutch Farmers with ‘WEF Food Hubs’ 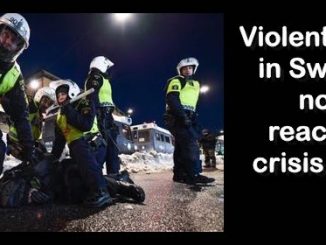