The Euro has been around for almost 20 years. The Russian transfer ruble survived 25 years. The two currencies have something in common: they were and are not a success story.

The introduction of the transfer ruble was intended to enable free trade between the countries of the Eastern bloc. The creation of the common clearing system led to the exchange rates for the East German mark, zloty, forint, lev, and even the Mongolian tugrik being arbitrarily fixed by the Soviet Union, regardless of the purchasing power of the national currencies. In the 1960s, the Bulgarian lev was 20% undervalued and the Polish zloty about 45% overvalued. Since the transfer ruble was not yet convertible into Western currencies, it remained an illusion and a means by which the Soviet Union could enrich itself and save its budget at the expense of its satellite states: the Russians bought raw materials, goods, food for convertible currencies in the West and sold them to their “socialist friends” for transfer rubels. The international bank for economic cooperation, which sat in Moscow and handled all transactions in the transfer ruble, swept the real trade surpluses and deficits under the carpet. With political change, the common settlement currency came to to an end, and it turned out that the Soviet Union owed huge sums to its “brothers”.

The situation with the euro is a bit different these days. There are certain similarities to the red dollar (that’s how some people called the transfer rubble). Firstly, all countries and citizens of the euro zone are constantly told that the euro is good for them all, which is not true. (The facts can be found in our other articles.)1)2)3) Secondly, the euro favours the trade balances of some countries (Germany, France) but damages those of others (PIGS countries). Thirdly, the euro as a transfer currency contributes to the growth of mountains of debt. Fourthly, the euro zone has been artificially extended – fortunately not to Mongolia – but Italy and Greece did not and do not fulfil the Maastricht criteria. This was the reason for financial crises and will continue to be so in the future.

There are also differences between the red dollar and the EU’s common currency. Firstly, the euro is not just a currency for accounting purposes: it is the only currency in force in the countries of the fraternal EU community. The dream of the communists has come true and the central banks of the eurozone members have become zombies that are supposedly allowed to participate in decision-making. Secondly, the mountains of debt are growing elsewhere – it’s not the issuer/manager of the currency that is in debt, but the “beneficiaries” who joined the euro zone.

Greece’s debt was handled in such a way that the country received a huge injection of money from the ECB; Italy’s and Spain’s debt will soon cause sleepless nights for decision-makers in Rome, Madrid, Brussels and Berlin.

The counterpart of the Soviet transfer ruble in the EU is, to be precise, not the euro, but Target 2. It is a payment system in which banks process cross-border payments in real time. In Target 2, surpluses or deficits arise when money flows from one eurozone country to another. During the aggravation of the last euro debt crisis in 2011 and 2012, capital from particularly affected countries like Spain and Italy fled through the Target 2 banking market to countries like Germany and Luxembourg, which were considered safe havens. Germany’s claims against the poorer southern European countries reached 700 billion euros at the time (see chart above). The situation only returned to normal when ECB President Mario Draghi made it clear that, if necessary, he could adjust the balance sheet by printing additional money. Target 2 prevented the countries from collapsing. If Spain had stayed with the Peso and Italy the Lira, they would have collapsed. Target 2 protected them from bankruptcy at the expense of German, Luxembourg and Dutch citizens. Since 2015 we have been observing the flight of capital to the north again, at a time when the money printing machine in Frankfurt am Main is working like crazy. This time, however, the capital flight is the result of Draghi starting QE in 2015 and the Bundesbank starting to buy back bonds on the market.

The Italian central bank is dependent on the ECB and has to buy Italian government bonds. German investors have to exchange these bonds for euros in Italy and transfer the money via Target 2 to their German bank. The growing differences in the Target 2 balance sheets therefore result from this:

So again, enormously high debt claims arose on the German side. This year they have already reached a trillion euros, i.e. a huge amount of 25% of German GDP.

The immense German Target 2 claims are not covered by any securities. If Italy or Spain withdraw from the euro zone, the Germans will be left to their own devices. There is still no unrest in Germany over this, because confidence in the Bundesbank is well known. Jaques Delors once said: “Not all Germans believe in God, but all believe in the Bundesbank.” Everyone probably believes in the ECB and Mario Draghi. At his press conference on 26 July this year, he wanted to have a calming effect when he spoke about Target 2: “It has nothing to do with the movement of capital from country to country”.4) In fact, it is only the clearing balances that can be overdrawn as long as no one leaves the euro zone.

So Italy must not leave the euro zone. It is “too big to fall”: its debt amounts to 2.3 trillion euros (!), liabilities in Target 2 rose in June 2018 from -164.5 billion euros in 2015 to -481 billion euros. This means that Banca d’Italia owes the Bundesbank almost half a trillion euros!

On the one hand there is Draghi, the Italian who uses his position to save his country, and on the other there are many German economists who criticise Target 2. Professor Hans Werner Sinn, for whom Target 2 is a cheque that cannot be cashed, is particularly well known. In one of his articles he describes the situation in Spain and Italy as follows:

“In these countries, radical socialists rule who don’t want to know anything about budgetary discipline; in Italy the old parties were swept away. The radical government of Five Stars and Lega wants to take out much more credit under the protection of the other euro countries than it is taking anyway and threatens to leave the euro if the EU refuses to do so.”5)

“The euro is indispensable because it is strong, because societies want it (!), and it is in no one’s interest to doubt the sense of its existence. It is not worth discussing the abolition of what is inevitable (!). That can only do harm.”6)

Comrade Draghi, of course, you are right: our transfer ruble is untouchable, and it is not worth discussing the existence of our (socialist?) community and currency. It will continue to exist for another 1000 years!

In 1990, Russia owed Germany 6.4 billion transfer rubles (7.4 billion euros) on account of its foreign trade balances. Schröder gave Putin 7.1 billion, and Russia only paid back 500 million euros.7) How much will Merkel give away to the south if something goes badly? 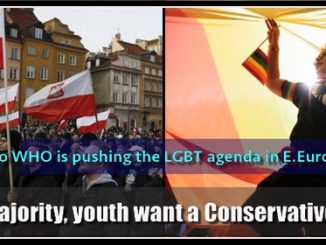 Poland: Like all over Europe, cities are directed to destroy the cohesion of the nation 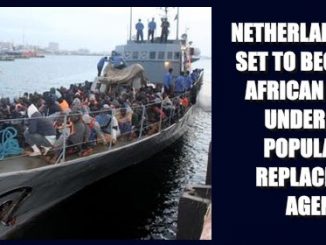 Thou shalt not talk about the disappearance of the Dutch population…

How Chairman Macron Set Up the Great Reset in France