ER Editor: In France, too, the political class is exempt from vaccination. Citizens can supposedly benefit from this by entering a bar or restaurant in a group and claiming to be a political meeting. Because political meetings cannot be prevented by this pass requirement. Cute, eh? Find a reason why the ‘exercise of democracy’ can still be maintained despite the rampant tyranny. You couldn’t make this up.

Italy: mandatory vaccination for everyone… except for MPs!

A bill passed by the Council of Ministers on September 16 extends the health pass to all public and private sector workers in Italy, starting October 15. Already compulsory in schools and social and health establishments, it will only exclude the unemployed and pensioners.

Mario Draghi is quicker than Joe Biden, who is struggling to vaccinate American workers. The decision to generalize the Health Pass (Green Pass in Italy) will end on December 31, the date on which the state of health emergency ends. Unless it is renewed. Suspense… The decree is the result of discussions between the government, political parties, unions and employers. Finally, all the representatives of the population agreed… against it.

Fines and paid tests, if you have not yet understood

The absence of a health pass will be sanctioned by a fine of 400 to 1,000 euros, and more in the case of counterfeiting. After five days of absence due to lack of a pass, “the work relationship will be suspended as well as the salary”.

The unions, always at the forefront of demands, are demanding that the state pay for the tests, while the government fears that this will reduce the incentive to get vaccinated. Italy has followed the example of Greece where, since September 13, unvaccinated employees in the public and private sectors must be tested once or twice a week at their own expense.

The control will be carried out by the companies.

For health workers, who are already required to be vaccinated, a doctor will have to inform the employer whether or not the worker is fit for the job.

For school personnel, on the other hand, the law does not require vaccination, but the presentation of either the vaccination certificate or the results of a sample taken every two days.

Who is subject to the Green Pass requirement?

However, the government is asking that the “Green Pass” be made compulsory for all members of Parliament, employees of the Chamber, constitutional bodies, including the Quirinal and the Constitutional Court, and the elected offices of the Chamber of Deputies and the Senate. “Denying the right to vote to a single No Vax deputy would be unconstitutional,” warned former minister Maurizio Lupi. Democracy is at stake! we add firmly in his direction.

The decision to allow a month to pass before the decree comes into force was made in the hope that the miracle of July would be repeated, when the announcement of the first Green Pass was enough to cause miles of queues at vaccination centers. In the meantime, the blackmail during vacation time has been replaced by the blackmail of employment.

The Italian “Verde” has been replaced by the English “Green”. To be in the green in Italian is like being in the red in France. The English term (green) is less anxiety-provoking. In the same way, in France, the word passport has been replaced by pass. One evokes the brakes on traffic, the other is supposed to open the doors. It’s clever, isn’t it?

If teenagers don’t want to understand anything…

With the start of the new school year, the government is considering mandatory vaccination not only for teachers, but also for students over the age of 12. “The government will use all necessary means,” said Education Minister Patrizio Bianchi. Currently, more than 1.7 million teenagers, or 38 percent, have not received their first dose. The government hopes that they will decide to vaccinate themselves, otherwise they will have to be forced to do so. (ER: We wonder what recourse Italian parents will have in this situation. Teenagers themselves can refuse in other countries, but that is clearly a difficult thing to obtain from a child.)

The decree was approved unanimously by the Council of Ministers, with the prudent absence of Prime Minister Mario Draghi. Why? To make the various components of his government believe that they are free to decide. An illusion, to be sure. A bit like the multiplexes that all play American films that are almost identical. ‘On this week’s program we have: the 5 Star Movement, Forza Italia, Italia Viva, the Democratic Party, Free and Equal and the League.’

A short bio of the Prime Minister (he governs, not President Mattarella): ex-Goldman Sachs – the bank that made up (ER: i.e. invented, as a fiction, which they indeed did to put Greece on the perpetual-debt hook) Greece’s accounts so that it could be eaten up by the European Union. The operation was carried out with the help of the governor of the Bank of Greece, Lucas Papademos, a member of the Bilderberg Club, just like Mario Draghi. The same club placed Mario Draghi at the head of the European Central Bank in order to get rid of Berlusconi, who was slow to implement liberal reforms (relaxation of legislation on layoffs, privatizations, lowering of civil servants’ salaries).

The coronavirus has opportunely come to the aid of these liberal projects. This is another slip of the tongue, because “liberal” as a system, a government, does not mean “free, freedom”. On the other hand, the name of the Prime Minister, “Draghi”, translates into French as “monsters”. Everything is clear! Evviva Il Duce! 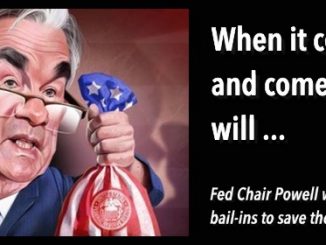 1 Comment on Italy: Mandatory Vaccination for EVERYONE… except MPs!