The French Election: Which Candidate should Leftists Vote for?

As presidential elections approach in France, many people will want to know which candidates promise to make a clean break with Atlanticist imperialism. Voters should question left and right at this important crossroads in French history.

Presidential candidate François Asselineau (pictured) of the Popular Republican Union (UPR), the fastest growing grass-roots political movement in France, has unequivocally condemned the US bombing of a Syrian Airbase last week. He has called President Trump, ” the American Tsipras.”

The leader of the National Front party, Marine Le Pen, who has hitherto been an admirer of Donald Trump, has also condemned the US bombing of Syria. She has defended the national sovereignty of Syria and the right of its people to national self-determination. Le Pen has called for an independent, international investigation into the allegations made against the Syrian government.

Jean-Luc Mélenchon (pictured below), leader of the France Insoumise (Rebellious France) was, predictably ambiguous in his statements. He condemned the use of chemical weapons regardless of who uses them. He did not , however, condemn the principle of bombing a sovereign nation in the name of “human rights.”

Translation: “Hollande and Merkel hold complete resonsibility for giving Trump the sole power to strike whom he wants when he wants”.

There are many people in France who will tell you that Jean-Luc Mélenchon (pictured) is a genuine “left-wing” candidate. In fact, there are some organisations claiming to be “Marxist-Leninist” who have given 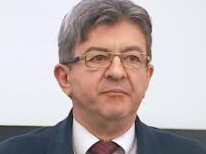 their support to the Trotskyist former PS back bencher! We are talking about a man who has always been a supporter of the ultra-capitalist European Union; a supporter of the far-right François Hollande during his dismal 2012 presidential campaign, and a defender of the “humanitarian” bombing of Libya in 2011 – one of the most atrocious wars of the last half century.

Jean-Luc Mélenchon is an imperialist, a war monger and a class traitor. But he speaks well and masks his reaction in eloquent, rabble-rousing left phraseology. It does not surprise me, therefore, to see Pole de Renaissance Communiste (PRCF), a Brezhneviste dissident group, supporting him; they failed to make a concrete scientific analysis of the USSR over thirty years of catastrophic revisionism and now the same anti-dialectical political posturing is evident in their support for Mélenchon.

Marine Le Pen’s condemnation of Trump is a wise move in terms of her electoral chances. Le Pen has increasing working-class support and, although she is no anti-imperialist, she has been consistent in opposing NATO wars of aggression disguised as humanitarian interventions. While Mélenchon was defending the carpet bombing of Libya in 2011, Le Pen wisely opposed it. In that debate Mélenchon was clearly the fascist.

Unlike Le Pen, Jean-Luc Mélenchon has benefited from considerable support from the oligarchy’s liberal press agencies. They are now claiming that he may become the principal opponent of Le Pen in the second round of this month’s elections. To leftists with little Marxist theory and less left-wing history, Mélenchon’s lofty pronouncements criticising French policy in Syria seem anti-imperialist. But dig a little beneath the surface and you will quickly find that Mélenchon is all form and no content. He is now saying that the war on Syria is all about “pipe-lines”.We have been talking about that for 6 years!

Now, when the rank and file of Mélenchon’s followers – some of whom are genuine leftists – are asking embarrassing questions at his rallies, he concedes that the Syrian war is not quite a ” revolution.” Then he falls back on the usual petty bourgeois leftist trope: national chauvinism – the problem is the Americans! France should form an independent policy in the Middle East, he exclaims. However, what he really means is that France should lead the way in humanitarian bombing campaigns and that they should do so under the aegis of the United Nations- left phrases and a block with the rights, as old Lenin would say.

No amount of mendacious lip-service to the Bolivarian revolution or Latin American progressivism will change the fact that Mélenchon is at heart a national chauvinist.

He is far closer to fascism than Le Pen. We define fascism as rule by the financial oligarchy. The financial oligarchy are more favourable to Mélenchon than Le Pen. The mayor of Janvry Christian Schoettl has recently accused Mélenchon of embezzlement of public funds. The allegations against the Rebellious France leader are more serious than those against Republican presidential candidate Francois Fillon. Yet, as if to prove the veracity of Schoettl’s allegations, Le Monde promptly took up the defence of Mélenchon.

In a video on You Tube, Schoettl claims that Mélenchon is protected by oligarch arms manufacturer and media mogul Serge Dassault because Mélenchon is precisely the kind of “anti-capitalist” capitalism needs to prevent its overthrow and maintain the illusion of democracy and freedom.

Mélenchon is the candidate of the Bourdieusian intellectual, the disgruntled civil servant, the well-meaning ecologist ; the theoretical anti-racist; the desperate trade unionist, the rebellious student and the smug left liberal. In short, Mélenchon is a perfect reflection of all the reasons, all the lugubrious reasons why we are living under a regime which imposes austerity on our workers, while attempting to replace them with imported slaves, promotes abortion, gay-marriage and euthanasia, or anything that negates productive life forces, or distracting the labouring masses from the real issues – anything that pleases the degenerate oligarchy. Mélenchon de quoi est-il le nom? Mélenchon, what is he the name of? He is the name of death, the death of hope in a socialist future, the corpse of capitalism preserved in wax.

In the 11 candidate presidential debates, it took three Trotskyite candidates to create the impression that the poor were represented in the election. Philippe Poutou of Nouveau Parti Anti-Capitaliste, (NPA) appeared in jeans and a sweater. You see, if you are a worker and represent the workers, you must look like one! Sartorially, left-wing politicians is about as good as it gets for the poor these days.

Mélenchon often sports a kind of débraillé version of a suit and likes to leave off the tie. The tie is right wing!  It’s all part of the infantilisation of politics: everything is about form, image and ideological simplication –  always the signifier, never the signified.

None of the Trotskyites actually propose the collective ownership of the means of production and centralised state planning, in spite of the fact that the productive forces of advanced economies have laid all of the technical foundations for a successful transition to socialism/communism.

Having said that, we should not have any illusions about the National Front either; they supported fascist criminals such as Augusto Pinochet and Francisco Franco. They received money from Korean billionaire Sung Myung Moon, a generous funder of fascist death squads in Latin America.

However, it should also be acknowledged that the anti-communist Moon was also praised by North Korean leader Kim Il Jun for his efforts at promoting peace with the DPRK and national unification.  Oscar Wilde said that the truth is never pure and rarely simple. Wilde’s maxim is, a fortiori, the case in the world of politics.

It would be foolish not to engage with populism in its current form. If Jean-Marie Le Pen, a former worker, hates the left, genuine communists should understand where he is coming from. If I believed that any of the Trotskyite candidates in the presidential election were really left-wing, I’d be a card holder of the National Front! But they are not left-wing. Since Leon Trotsky’s collaboration with Nazi Germany in the 1930s, this form of leftism has always been, in the words of Gramsci ‘la puttana del fascismo’- the whore of fascism.

Marxist-Leninists have always formulated a dialectical analysis of the proletarian revolution. France is about to erupt in civil war. US imperialism, deeply divided, is pushing the world to war. We must be capable of distinguishing primary and secondary contradictions. The primary contradiction now is between globalisation and the national democratic revolution.

The national democratic revolution will not solve the crisis of capitalism but it may energise the working class in Europe. The return of the Westphalian nation-state in international relations must be supported. Asselineau and Le Pen are defending those principles.

Asselineau is by far the only genuine people’s candidate. He has consistently exposed the media lies used to justify wars of aggression. He is proposing a complete break with the EU and NATO. All Leftists should vote for him and to hell with Mélenchon!

It is hard to know if Asselineau will support Le Pen in the second round. I doubt it. Asselineau does not believe in the sincerity of Le Pen; although she has criticised Trumpist aggression, she may backslide on many issues. Asselineau supports independent media.

Although not a Leftist, he has expressed interest in Marxism, has shared a platform with my friend and intrepid Marxist intellectual Bruno Drweski and has even promoted the work of Annie La Croix Riz, arguably the most important communist historian in France today. She is a member of the PRCF, yet the PRCF are voting for the Trotskyist Mélenchon!!!

The petty bourgeois leftist reactionaries are the greatest obstacle to the liberation of labour from capital. The fact that significant sections of the European working class are voting for right-wing populism means that they are beginning to break the chains which social democracy has imposed on them over the last century; they are beginning to see the class function of post-industrial multiculturalism. But it is important to realise that right-wing populism is a dissident movement within the oligarchy.

In France, there is a genuine grass-roots movement which is creating the platform for a  popular front against financial oligarchy, against the New World Order, against fascism – the Popular Republican Movement. With François Asselineau as president, France would  become not just a nation once again, but a force for radical, progressive change in the world. 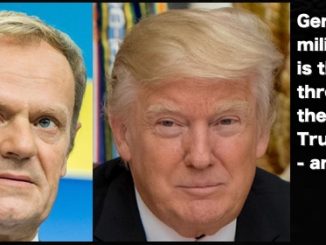 ‘Germany, not Donald Trump, is biggest threat to the EU’