ER Editor: We remind readers of the article we published on this exposure of 10 fatal flaws in the Corman-Drosten paper that, overnight, propelled mass PCR testing everywhere for the virus. See Global Team of Experts Finds 10 FATAL FLAWS in the PCR, Demands It’s Urgently Axed.

This new UK group, seeking legal redress for victims of anti-covid government measures, discussed below, is being censored and was difficult to find in a search. Here it is:  https://pcrclaims.co.uk/:

PCRclaims.co.uk is a Pro Bono global network of advisors and independent lawyers led by Jo Rogers at Navistar Legal

Our mission statement is simple:

To bring LEGAL JUSTICE to UK citizens for the devastating harm caused by lockdowns to families and businesses. 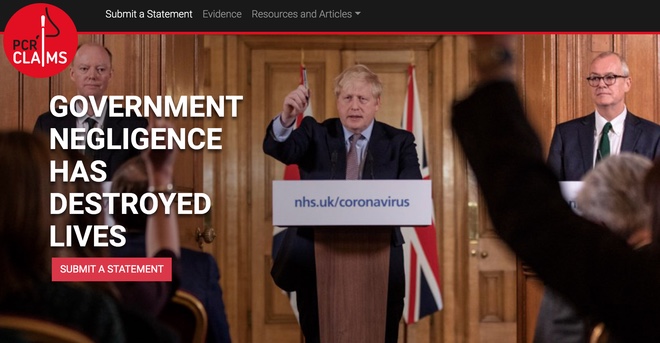 A publisher admitted it is urgently re-investigating research, following revelations that the PCR test it extols is defective, giving too many false-positives. The news comes as a new group plans a legal challenge over the checks.
.

Last week I reported on an astonishing review conducted by a group of senior scientists on a paper on which most Covid testing is based. It comprehensively debunked the science behind the Corman-Drosten paper, which described a protocol for using the polymerase chain reaction (PCR) technique to detect Covid, finding 10 fatal flaws, including major failings in the operating procedure and potential conflicts of interest among its authors.

A nurse performs a PCR test at the Hospital de la Tour during the COVID-19 outbreak in Meyrin near Geneva, Switzerland, © Reuters
.

The team behind the review demanded that Eurosurveillance, the journal that published the original research, retract it at once, as in their view it clearly failed to meet proper standards. This is of vital importance because the Corman-Drosten paper laid the path for mass PCR testing as the main source of data on the coronavirus. Almost all case numbers, infection rates and even deaths attributed to Covid are based on PCR tests (and all the attendant lockdowns and restrictions on people), and a huge amount of them use the method set out in the Corman-Drosten paper.

“seeking further expert advice and discussing the current correspondence in detail. We will, according to our existing procedures, evaluate the claims and make a decision as soon as we have investigated in full.’’

So no retraction yet, but it would not be surprising if one came soon.

One of the 10 fatal flaws in the original Corman-Drosten paper was that it was unclear whether it had ever been subjected to proper peer review – before, that is, the panel of experts took it upon themselves to do so. The paper had been submitted on January 22 and published the very next day. Peer review, when it takes place, is normally a long, drawn out process with plenty of back-and-forth, even when it is being rushed as much as possible. That it could be done in a single day beggars belief.

But that is what the authors are asking us to believe, as they are still claiming that their article was “peer-reviewed by two experts on whose recommendation the decision to publish was made.’’ Eurosurveillance may want to consider submitting this feat to Guinness World Records as the fastest peer review of all time  – it may not be too late to get into the 2021 edition.

Taking the government to court

It is clear that the wars over PCR tests are hotting up, and the stakes couldn’t be higher. A new organisation in the UK, calling itself PCR Claims, has been set up to challenge in the courts the British government’s handling of PCR testing for Covid-19.

The organisation describes itself as a pro bono network of lawyers, life scientists, and business advisers led by Jo Rogers, a lawyer who runs Navistar Legal.

Rogers told RT.com: “The intention is to expose the controversy of the inappropriate use of PCR in the context of pillar 2 community testing and private sector lighthouse labs.

“PCR was not designed for mass testing because of the sensitivity and risk of contamination. There are serious flaws in many of the protocols employed, which were hurriedly put together, some without peer review. The operational false positive rate is unknown and therefore every positive test could be false, unless accompanied by clinical examination.”

As an example of errors with PCR, the group points to a recent case from Cambridge University (ER: see our tweet image below – 100% of ‘positive’ cases were not):

“Our first priority is to gather evidence of the harms from restrictions to life whose policies were driven by PCR test modelling and/or ‘case’ results,” Rogers said. “We believe the cases are a pseudo epidemic, as seen in other places around the world using PCR testing.

“Legal action is progressing and further instances will follow as we receive the evidence of harms. The gathering of that evidence is ongoing nationwide, as well as our raising awareness of errors and negligence.” 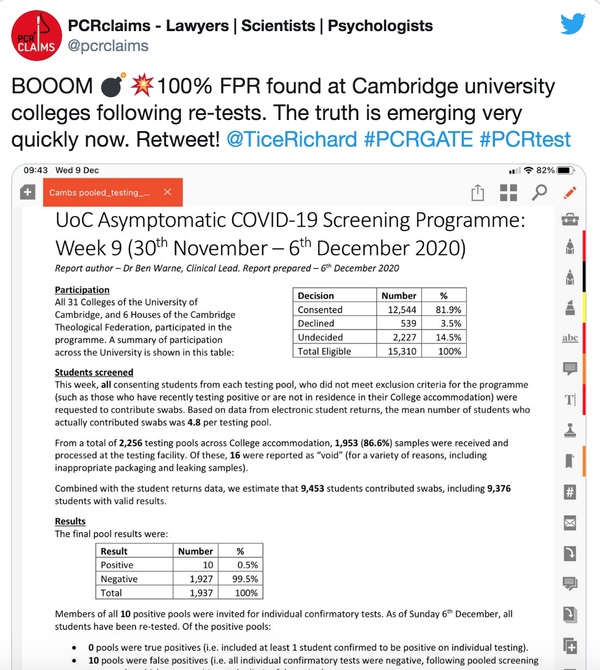 As someone who shares their deep concerns over these PCR tests, this is good news. At last, there is somewhere to go for expert legal counsel on the government’s persecution of free-born citizens. And thank heavens also for the stellar work of the entire peer review team for holding this bad science to account. If indeed it is retracted, it will be a major victory for those of us who can see through what Dr Mike Yeadon, one of the paper’s debunkers, rightly calls a “false positive pseudo-epidemic.”

WHO (Finally) Admits PCR Tests Create False Positives – Why This, Why Now?