ER Editor: To recap, two NHS workers developed significant allergic reactions this week to the mRNA vaccine, which prompted warnings against the vaccine for allergy sufferers. Although it’s been buried by the MSM, 4 US participants in vaccine trials developed Bell’s Palsy (see sample images), which they’re curiously quick to maintain has no relation to the vaccine. Yet the same adverse reaction was not experienced by ANY in the placebo group. Presumably these people were checked to see if they were having a stroke… 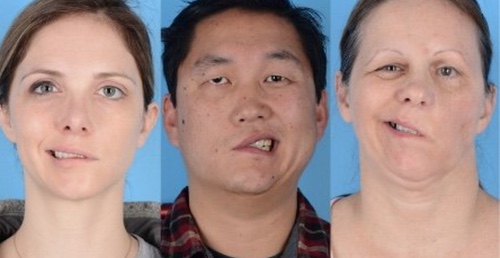 We also recommend this piece from Fierce Pharma (Dec 9), an industry insider site, which reveals appendictis to have occurred in addition to Bell’s Palsy in the vaccinated group:

When the FDA released a 53-page briefing document on Pfizer’s COVID-19 mRNA vaccine candidate yesterday, most readers zeroed in on the shot’s high efficacy in a wide range of demographic groups. Wall Street analysts dug a bit deeper.

Their conclusion? A few red flags in the FDA documents will likely generate some discussion at Thursday’s advisory panel meeting, but not enough alarm to scuttle an emergency authorization.

One major point of discussion at the meeting—where vaccine experts will offer their approval advice to the FDA—will be side effects that cropped up in the phase 3 trial, analysts predicted. The side effects were rare but inflammatory in nature. For example, there were more cases of appendicitis and Bell’s palsy among those who received the vaccine than in the placebo group.

Now we’ve got ‘false positives’ (they seem so sure of this being false) for HIV from Australia’s own version of a covid vaccine.

Australia has abandoned the development of a domestically-made coronavirus vaccine after participants in clinical trials for the jab returned false positive test results for HIV.

The drug, created by the University of Queensland (UQ) and biotech firm CSL, triggered a “robust” immune response to SARS-COV-2 in phase 1 trials, but it also led to some unfortunate complications involving another dangerous virus. Antibodies that were shielding participants from a Covid-19 infection were also leading to false positives on HIV tests.

Although no trial participant had actually contracted HIV, Australia’s Health Minister Greg Hunt acknowledged that the bizarre side-effect interferes with HIV screening. There is no known cure for the virus, which attacks the immune system, and if left untreated HIV can lead to AIDS.

According to the vaccine’s developers, the problem could take a year to troubleshoot. The setback has prompted CSL and the Australian government to cancel phase 2 and phase 3 trials.

The coronavirus jab was one of four candidates commissioned by Canberra. Prime Minister Scott Morrison said that the drug would be shelved indefinitely and “will no longer feature as part of Australia’s vaccine plan.”

Australia also inked a deal for 10 million doses of the Pfizer/BioNTech vaccine, which is expected to receive approval from the country’s drug regulator by early next year.

Governments and pharmaceutical firms around the world have been scrambling to push out an effective Covid-19 jab, leading to safety concerns over the rushed development. The US drug regulator, the Food and Drug Administration, recently revealed that four people administered the Pfizer/BioNTech vaccine experienced temporary facial paralysis, although the FDA said there was no evidence linking the health problems with the jab. (ER: And they know there is no link to the vaccine how?)