The beginning of a social “Stalingrad” in Europe: the Yellow Vests against the totalitarian Empire of Finance

Back to the Future!

Elated, with the single-mindedness of the “We” of the many, suddenly aware of its power, the crowd pours out of the narrow street in which it was crammed, to the spacious Place de la Republique while singing the Marseillaise. It is by far the most popular song among the Yellow Vests.

The second most popular is the WWII partisans’ song (Chant des Partisans), though with slightly changed lyrics. Now the song calls for the “toothless”, the “illiterate”, the “slackers”, the “stubborn Gaullois”– as Macron and his servants called the people who refuse to embrace his “reforms” – to rise against the Financial Elite, sparing not tears and blood, just as the French patriots did when they fought against the Germans. Occasionally you can also hear them singing the Internationale, which, anyway, was an adaptation of the Marseillaise. 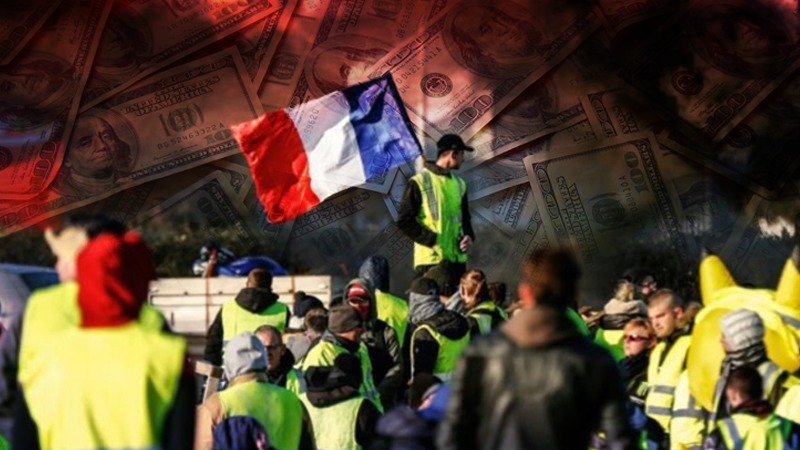 Originally the song of the French Revolution, La Marseillaise is now the official national anthem of France. It calls “les enfants (the children) de la patrie”, the “citizens” to “take up arms” and raise the “bloody banners” against “tyranny” as the “day of glory” has arrived.

The ghost of the revolution

There is a one dominant analogy which is drawn, indirectly but explicitly by all –  whether by discussing with representatives of the French establishment or by watching the Yellow Vests’ demonstrations or by listening to the slogans and songs of the protesters here in France. The analogy has been strongly felt throughout the last three months during which this original movement, despite the unavoidable fatigue, continues its mobilizations, taking by storm the French rural and peri-urban areas, several provincial cities, while now it also attempts to penetrate the “Suburbs”, the forts of the French working class.

The inescapable comparison which appears in a variety of forms, be they planned or spontaneous, is the Great French Revolution of 1789.

Its ghosts seem to haunt the French and their country. Whether it is because they want to dispel its notion or draw inspiration from it, I am not sure, but in the end, this is the analogy which, one way or another, is being drawn by everyone – both the demonstrators and those siding with the government.

Anyone who wants to make a political argument sound convincing in today’s France is rushing to “borrow” a character or a symbol of 1789. “You’re like Mirabeau” a “leftist” critic said, lashing out at Mélenchon the other day, accusing him of being overly compromising.

Either through symbols and historical analogies or collective memory, the memory has been passed down through ten generations of the French people. The mother of Europe and modern Democracy now faces up to its past, in search of its future.

France, all of its classes – save perhaps for the English-speaking managers of French multinational corporations and some extreme neoliberals and neoconservatives who are ashamed of their country’s history – remains inherently proud of its Revolution, even if it shudders at its memory.

The hour of tear gas

Although the Marseillaise announces the coming of the day of glory, for the time being, it is only the “hour of tear gas,” as canisters hellishly rain down upon the demonstration as it leaves the Place de la 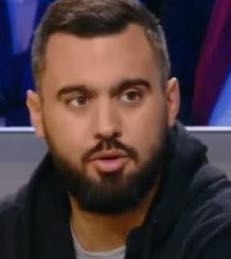 Republique. “Damn you” I say, talking to myself, having spotted Eric Drouet (pictured), the lorry driver who became a “star” of the Vests’ movement, but unable to catch up to get an interview with him. I was caught in the rampage which scattered the crowd, some of us fleeing for refuge and others pushing on.

Drouet has a few hundred thousand followers on his Facebook page and is now becoming as difficult to talk to as it is to talk to the Prime Minister.

But the tear gas these days in France is no joke. There are many who started their day that morning with both their eyes and arms, ending in the evening in a hospital with one of these appendages missing.  The police’s crackdown is of course a double-edged sword, having already been condemned by Amnesty International, law experts and government MPs.

On the one hand, it discourages some people from joining the demonstrations, but on the other it inspires anger. At the same time, police officers seem to have reached their limit, having spent days and nights in the streets over the last three months, counting injuries without getting paid overtime in order to suppress the demonstrators, among whom they might find their own wives!

A protester dressed in an 18th-century outfit pounds his drum rhythmically  …. No one seems to pay attention to the deep repetitive sound, and there is no need to. As the soundtrack of the demonstration, the message carried by the rhythmic beating is so unequivocal that it enters directly into your head, likely unnoticed by your waking mind.

It’s the precise sound which once accompanied Louis XVI and Marie Antoinette on their way to the guillotine in the late 18th century, resounding through the streets of Paris once again. Their beheading constituted the founding act of the French Republic and modern European democracy.

That being said, it is also the same sound which, a few years later, accompanied Maximilian Robespierre, the leader of Jacobins, to his horrible end, no one among the people of Paris raising a finger to save him. It was the fatigue and exhaustion of the people themselves that Joseph Fouché used in order to get Robespierre out of the way. His role presents some similarities with Stalin’s in the Russian Revolution.

Answering Hemingway’s question about “for whom the bell tolls”, a friend sitting next to me (a psychiatrist in one the capital’s large hospitals) offers an explanation for the increasingly more frequent repetition across the country of the ritual of beheading an effigy of “King Macron”, which caused an almost hysterical reaction in the government-friendly media:

“The French need their history to boost their courage. They did it once, so they can do it again”. Of course, this still only a “symbolic” execution, not a real one.

It is a revolution?

Can this Rebellion “carnival” turn into a real Revolution? “What is happening in your country? Is it a rebellion? Can we say that it is a Revolution?” I ask Francois Asselineau, a man well acquainted with French history and EU treaties, deeply Gaullist in his ideology and leader of a small party which campaigns for the exit of France from the EU and NATO.

I understand that he is troubled and hesitates to answer – just as with anyone else to whom I have asked the same question. He finally turns to me: “I don’t know. Something is missing. There is a portion of the people not ready to risk everything”.

I hear him and what comes to my mind is Wilhelm Reich’s diagnosis. This renowned Marxist-Freudian writer of the inter-war period contributed one of the most insightful analyses of Nazism and was expelled from both the Communist Party and the International Psychoanalytic Association due to his nonconformist and critical thinking. He wrote that the Germans had it bad in the 1930s because they wanted a Revolution but they were afraid of it. Instead of doing it themselves, they appointed Hitler to do it for them – and the rest is history.

Limits of the Yellow Vests

But there are other reasons explaining the fact that, although the vast majority of French people agree with the Yellow Vests’ demands, only a minority has joined in the demonstrations with them.

One of the reasons is that, despite the fact that half of the French people suffer under the current regime, the other half seems to do well… at least for now. Whether their children will be able to afford the same way of life is still in question.

They may also feel that although the Yellow Vests are fighting for the right cause, they haven’t found a way to achieve their goals. After all, what could a single country do in the context of “globalization” and of the global dictatorship of the financial Capital? How could anything actually be achieved?

There is no doubt about the fairness of the vest’s social demands. No doubt some of them could be achieved through a form of wealth “redistribution…”  but in the end, what is needed is a radical, almost revolutionary, reform of the neo-liberal economic model.

The forty years of decay and degeneration of the Left and its ideology, during which any Keynesian and Marxist influence on economic and social sciences was eliminated and the neo-liberal doctrines have almost universally prevailed, have not allowed for the formation of any convincing alternatives to the current order.

In May 1968, the idea of generalized social self-management was at the forefront of the new ideas for the organization of society. Nowadays, you hardly ever hear anything about it. This can be explained in part by what happened in the decades that followed that May, but it’s not only that.

The French are not revolting now in search of “Utopia,” of a better society, as they did 50 years ago. They’re revolting because they feel that they’ve got their backs against the wall: they feel that forces outside their control have seized power and they want to destroy France, its democracy, its people and its society.

This is probably why the youth and the intellectuals are not participating in the revolt as they always prominently had in previous revolts and revolutions.

The older generations better remember, understand, and feel the significance of what is at stake, what is about to be lost, what is coming. They have more tools to grasp the significance of approaching Totalitarianism than both the young educated part of the population, who still hope there will be a place for them, along with the intellectuals (including so-called “professional revolutionaries”) who long ago stopped being motivated by anything but their overblown Egos, which are directly proportional to the insignificance of their intellectual production. 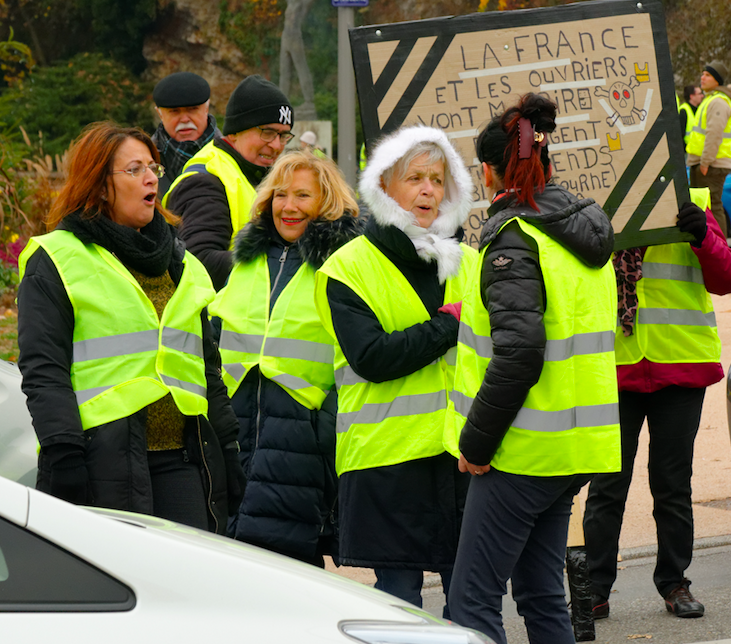 On the opposite end, the Yellow Vests, that is the French popular classes, seem to know very well how to assess Melenchon, the ex-LCR, their trade unions… not to mention Benjamin Netanyahu’s close friend Marine Le Pen!

By instinct and their own social experience, they feel much keener than anybody else the enormity of the totalitarian project they are facing, of Counterrevolution which began with Neo-Liberalism and proceeded to the destruction of the USSR and the nationalistic Arab regimes. It has already destroyed Greece, and now is coming to the center of Europe.

In this sense, the French revolt is almost as important as the battle of Stalingrad in the Second World War.

Perhaps it is even much more important, considering the incomparably greater risks that mankind and our civilization faces nowadays as a result of the world-ending technologies developed since 1945.

ER recommends other articles by UWIData 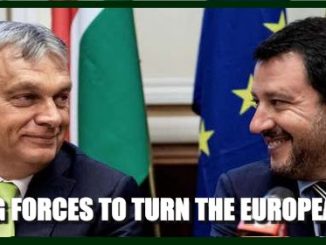 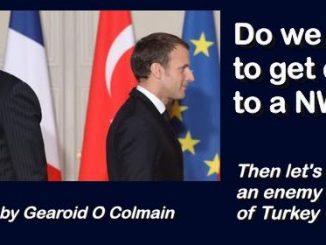