ER Editor: A contributor to this site more familiar with the situation than we are warns us against being too optimistic. He says:

Although at first sight it may be a hopeful sign that the farmers are making progress, there’s also a big worry. Staghouwer was one of the few (or the only one even) ministers who, at least not openly, seemed NOT to be on the payroll of the WEF (World Economic Forum). His temporary successor at least is another stooge. So there’s a worry that this unprovoked resignation is just another step in taking more power.Though it might be useful information, it’s something that doesn’t deservecelebration… yet.

Carola Schouten, the deputy prime minister, is temporarily replacing him according to the article below. Here is her WEF page. 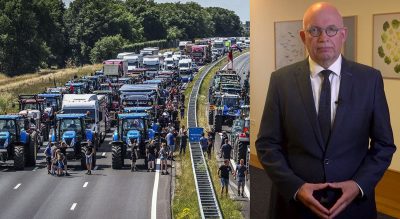 The Netherlands’ agricultural minister Henk Staghouwer has been forced to resign following widespread protests from Dutch farmers over his radical climate agenda that seeks to destroy their livelihoods.

In the wake of the huge protests from farmers, Staghouwer has now been forced to step down.

He told the Dutch cabinet that pushback from farmers had meant he would not be able to meet a September deadline for rolling out the government’s radical green policy, the AP reported.

The climate agenda involves cutting nitrogen emissions from the nation’s farming sector to the point where it made it impossible for farms to continue operating.

The initiative includes a $24.2 billion scheme to buy out local farmers and facilitate the transition away from intensive farming practices.

The push provoked mass demonstrations by farmers across the continent.

The farming sector faced a massive upheaval due to emissions reduction goals, he added.

In July, over 40,000 farmers took to the streets in protest of the policy, blocking roads with tractors and defacing government officials’ homes.

Sympathizers elsewhere in Europe staged protests in solidarity with the Dutch farmers, arguing that such a policy is counterproductive amid highly elevated inflation levels and food shortages.

“I asked myself the question, ‘Am I the right person as Minister of Agriculture, Nature and Food Quality to lead the tasks that lie ahead?’,” Staghouwer said after nine months in office, according to NL Times.

“Last weekend, I came to the conclusion that I am not that person.”

Staghouwer said he required more time to develop proposals for a future sustainable agriculture industry ahead of the government’s budget formation earlier on Monday.

He added that he wanted to wait until ongoing talks between his office and industry representatives had come to a conclusion, NL Times reported.

Translation: I have come to the conclusion that I am not currently the right person as Minister to lead the major challenges facing agriculture, horticulture and fisheries. For this reason I am stepping down as Minister of Agriculture, Nature and Food Quality.

Staghouwer faced criticism from the parliament for failing to develop a concrete plan to help the sector transition to farming practices that lower nitrogen emissions, according to DutchNews.nl.

Officials within his department also resisted plans to revamp the farming industry.

The Dutch government mandated a 50% reduction in nitrogen emissions by 2030, tasking individual municipalities to figure out how best to meet that goal, Deutsche Welle reported.

Livestock farming accounts for 40% of emissions in the country.

The policy could see up to a third of livestock farmers put out of business.

The Netherlands is the world’s second-largest exporter of agricultural products and the European Union’s largest meat exporter, according to CBS News.

Bart Kemp, the foreman of the farmers’ interest group Agractie Nederland, told NL Times that farmers said Staghower had “little concrete vision in him” and “faced an impossible task.”

Staghouwer’s predecessor, Carola Schouten, temporarily took over his position while a replacement is determined from Staghouwer’s party.

“Schouten has never attached any value to a good relationship with the farmers,” Kemp told NL Times.

Featured image is from Slay News

The original source of this article is Slay News

The Elite’s Megalopolis Plan for The Netherlands, Belgium and a Slice of Germany