The far-right Dutch anti-immigration Party for Freedom, led by Geert Wilders, would become the largest party in the parliament and beat the prime minister’s ruling conservative liberals if elections were held today, according to a new poll data.

The Wilders’ Party for Freedom (PVV) would win 33 seats in the 150-seat lower chamber of the Dutch parliament if elections were held today, according to Maurice de Hond, the Netherlands’ most reputed pollster. 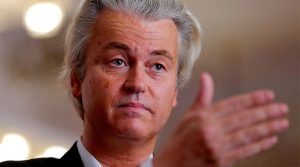 In that case, Wilders would become the Netherlands’ next prime minister as chairman of the biggest parliamentary party, according to the PJ Media news outlet. Prime Minister Mark Rutte’s People’s Party for Freedom and Democracy would finish second, securing 25 seats. 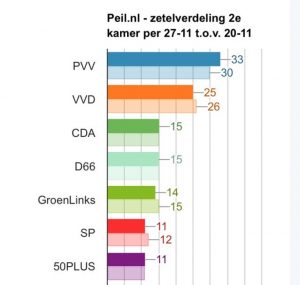 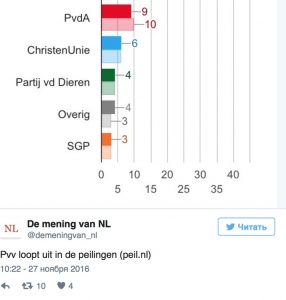 The far-right party has 15 seats in the current parliament, having gained about 10 percent of the vote at the 2012 general election. The next election will take place in March 2017, leaving many to believe Wilders will triumph amid growing frustration with the Netherlands’ center-right coalition.

Notably, electoral support for the PVV has not changed dramatically over the past few months. In August, Maurice de Hond predicted the party would have the same 33 seats, down from the February prediction of 42 seats, according to Dutch News. Despite trailing in polls at that time, Wilders’ party remained the country’s biggest with 22 percent of voters backing it.

The PVV appears to be gaining ground despite the ongoing court trial against Wilders, who was charged with inciting hatred and discrimination against the Dutch Moroccan community.

The charges were brought after the controversial far-right leader led a chant for fewer Moroccans in the Netherlands at a rally last year. State prosecutors insist Wilders engaged in hate speech when he asked supporters if they wanted “fewer or more Moroccans” in the Netherlands. After supporters chanted back “fewer,” he replied: “We’ll take care of it.”

In a televised statement on the last day of the trial, Wilders denied inciting racial hatred and added that if he was convicted, “millions of Dutch citizens will be convicted with me.”

Wilders described his party as part of a growing anti-establishment right-wing movement that encouraged the Britons to vote for Brexit and American white blue-collar voters to support Donald Trump in the 2016 US presidential election.

Some of his previous statements appeared to be quite inflammatory, and critics argue that his one-page electoral program he made public in August contains unrealistic promises. Titled, ‘The Netherlands is ours again’, Wilders’ manifesto called for the closure of all mosques and Islamic schools, a ban on the Koran, and “no more immigrants from Islamic countries.”

Wilders’ surge in popularity comes amid reports on European far-right gaining momentum throughout the past year. In France, pollsters say there could be the possibility that Marine Le Pen (left), the outspoken leader of the National Front, could be elected president next year. However, her center-right adversary, ‘Thatcherite’ Francois Fillon, who recently won the Republican nomination, will be a near-peer opponent.

In Austria, Norbert Hofer of the right-wing anti-Muslim party FPO could be elected president on December 4, an event that would send shockwaves across Europe and boost like-minded parties in the continent. The latest poll by Statista.de gives Hofer 49 percent of the vote, compared to 51 percent given to his sole opponent, Alexander van der Bellen of the Green Party.

Le Pen claims that what Europeans are desperate for the ‘Trump effect’, that is, the mistrust of established political elites and fear of mass immigration. Critics say the far-right are exploiting a populist agenda and capitalizing on primitive sentiments.

Speaking to RT on Tuesday, Ami Horowitz, a US political commentator, said Trump, Le Pen or Wilders are “certainly not a majority,” but “they are driven by certain trends similar both in the United States and Europe … the fact that mainstream politics and mainstream media are simply not trying to find answers to the demands that people across the world have today.”

“And people are sick and tired of not being represented by the mainstream politics, and I think that people simply want solutions to the vexing problems we have in the world today, whether it be economic stagnation or spectacular immigration problems.”

We were lied to! Secret document FCO 30/1048 kept truth about EU from British for 30 years [FARAGE VIDEO] 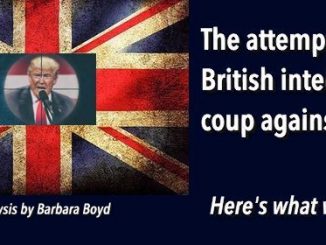