ER Editor: The article below, a comparison of ‘covid-19’ deaths between Germany and the US, is yet another attesting to the fact that primary care physicians, including family doctors, were targeted and neutralised from the get-go once the real cases of ‘covid’ (people feeling sick, reporting symptoms) started mounting back in the spring.

Regarding France, see this report Covid-19: France Has Deliberately Sidelined Its Family Doctors in which it is revealed that the government reduced doctors’ visits by making the public afraid of seeing them, then forbidding doctors to recommend anything beyond over-the-counter painkillers, and then banning the prescribing of hydroxy. See also this video report where a Florida doctor recounts how pharmacies are refusing to dispense hydroxy, even when patients present a valid script for a drug they’ve been using for years: Dr. Dareld Morris on the Lies and Crimes of the COVID Operation [Video].

72% of deaths could have been avoided

ANALYSIS : Hydroxychloroquine works, episode V: Germans say  “Wer heilt, hat Recht” or “He who heals is right”.  The German Covid-19 healthcare strategy of freedom of prescription if applied in the US could have saved 91,500 American lives.

The nrCFR index (*) is a measure of the quality over time of the medical management and care of the Covid-19 pandemic in a population. Our previous paper (2) studied the impact of the therapeutic strategies decided by the governments and the health authorities of the US and Italy, at the height of the pandemic. In the present paper, we will consider the USA and Germany.

Germany adopted a healthcare strategy based on complete freedom to prescribe for primary care physicians, right from the start rather than at the height of the epidemic as in Italy.

In particular the BfArM (the FDA equivalent in Germany) explains how to use hydroxychloroquine instead of discrediting and discouraging it.

Its Covid-19 health information sheet advises on the use of hydroxychloroquine by providing detailed information for primary care physicians. The recommended dosage for patients is transcribed below:

In contrast, the United States of America discouraged its use for alleged reasons of toxicity, until very recently when the FDA chief opened a door by declaring this is to be decided between patient and doctor in an interview on NBC’s “Today” show.

What if the USA had adopted the same strategy as Germany?

We therefore applied the nrCFR (healthcare success index) curve for Germany to the resolved cases curve for the USA to estimate the number of fatalities that we could have observed in the USA.

The assumption here is that the USA government would have used the same health strategy as Germany, namely the freedom to prescribe.  This does not take into consideration other factors such as hospital saturation.

The graph below speaks for itself. The blue area represents the number of deaths in the US observed over the period from March 22nd to July 2nd.  The total number of deaths amounts to 126,799 according to official data released by Johns Hopkins University (JHU). The green area represents the simulation for the number of deaths in the United States of America if it had followed the same nrCFR curve as Germany(3), only 35,312! The difference between the two areas represents the 91,487 American citizens whose lives could have been spared if the US had had the same healthcare success as Germany. This is our current estimate of the impact of the strategy: a staggering 72% fewer deaths in the US if they had let primary care physicians free to prescribe. It comes after our first estimation of 41.5% based on the Italian healthcare success (2).

The difference between the two areas represents the number of Americans whose lives would have been saved if the USA had had the same success in healthcare as Germany. This second estimate of the impact of the strategy with 72% fewer deaths in the USA based on Germany’s nrCFR follows the 42% estimate made before (2) based on the Italian nrCFR.

The German strategy applied to the US would have saved an estimated 91,500 lives.

This number would be even higher if the index was corrected for the different age structures: 22% of people aged 60 and over in the USA compared to 28% in Germany (World Bank data for 2018).

The Hippocrates quote “He who heals is right” has not been forgotten in Germany: “Wer heilt, hat Recht”.

Legal disclaimer : This estimation is used for illustration purposes. It is based on the data provided by the Johns Hopkins University which at the time of the analysis is presumed to be correct.

(*) Definition: nrCFR New Resolved Case Fatality Rate: a concrete and dynamic indicator of healthcare success. Developed by Michel Jullian, it is simply equal to the proportion of deaths among the cases resolved (recovered or dead) in the 7 days ending on day t:

where D= total number of deaths and R= total number of recovered since the beginning of the epidemic. It should be corrected for age when populations of different age structures are compared. It has no direct dependence on epidemic or testing dynamics or history.

(3) Sum over the period from t = March 22nd to t = July 2nd of the German nrCFR on day t applied to new US resolved cases of the same day smoothed over 7 days. In general, a 7-day smoothing has been applied to compensate for the effects of time-lagged data declarations, for example the weekend effect where the data are accumulated and reported at the beginning of the following week.

(4) Other elements observed in Germany, not directly concerning care. Germany has adopted a simple strategy, rigorously applied with the trusted German rigor. As a shrewd scientist, Chancellor Merkel was the first to set an example by confining herself. Germany, practicing a more flexible lockdown (the Germans could get around by bicycle, for example), quickly emerged from the period of lockdown as soon as they considered that the peak of the pandemic had been crossed. Simultaneously accepting the risk of an upsurge in cases that could be managed because the hospital capacity was available. Despite this, some German doctors have organized and asked for a citizens’ commission of inquiry, as they are truly unhappy with the political and economic management of the crisis. All this whilst Germany shows one of the lowest fatality numbers over the period with only 9,154 deaths. The massive testing policy in Germany has helped to quickly isolate affected and at-risk patients, rapidly reducing the R (reproduction number) below 1.

Thanks to Annie Wypychowski, Nathalie Izzo (@ Nathalienath19) and to @Dover63A for “wer heilt, hat recht”. 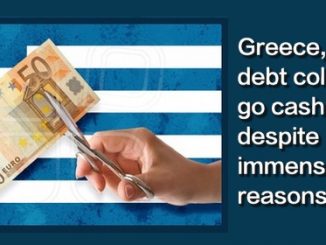 How Greece Became A Guinea Pig For A Cashless, Controlled Society 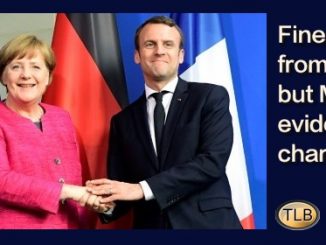