ER Editor: For an exhaustive look at the Common Purpose programme, practically installed in the UK since around 1990-1, see this site compiled by Brian Gerrish of the UK Column – https://www.cpexposed.com/.

When you consider Trump’s phrase about ‘draining the swamp’, this just shows how the Swamp has got its tentacles deep within society.

We particularly recommend hearing Brian Gerrish’s experiences interviewing people who have been, quite literally, mind controlled by the Common Purpose programme, whose recruiters it is believed engage in neuro-linguistic programming (NLP) during weekend training sessions of the unsuspecting. In other words, these people have been programmed, put on automatic pilot, to see the world in a certain way and act on that. Cressida Dick, London’s top cop, discussed below, is believed to be a prime example of this programme. Such brainwashed recruits are apparently distinctive for their robotic-type speech and behaviour. The article below mentions the mindset of people who have been ‘trained’ by them.

If you visit the Common Purpose site, you’ll see a lot of feel-good talk and cheery, smiling faces with a distinctly globalist / immigrant / internationalist feel.

Readers may also be interested in this article – https://www.fortisestveritas.co.uk/common-purpose-what-is-its-real-objective/

The main function of Common Purpose is that of a recruitment organisation being used to recruit the commissars and apparatchiks needed to implement the government’s hidden communitarian agenda.

Although it has 80,000 trainees in 36 cities, 18,000 graduate members and enormous power, Common Purpose is largely unknown to the general public.

It recruits and trains “leaders” to be loyal to the directives of Common Purpose and the EU, instead of to their own departments, which they then undermine or subvert, the NHS being an example.

Common Purpose is also the glue that enables fraud to be committed across these government departments to reward pro-European local politicians. Corrupt deals are enabled that put property or cash into their pockets by embezzling public assets.

It has members in the NHS, BBC, the police, the legal profession, the church, many of Britain’s 7,000 quangos, local councils, the Civil Service, government ministries, Parliament, and it controls many RDA’s (Regional Development Agencies).

Cressida Dick is the Common Purpose senior police officer who authorised the “Shoot to kill” policy without reference to Parliament, the law or the British Constitution. Jean de Menezes was one of the innocents who died as a result. Her shoot to kill policy still stands today.

Common Purpose-trained Janet Paraskeva, the Law Society’s Chief Executive Officer. Surprising numbers of lawyers are CP members. It is no coincidence that justice is more expensive, more flawed and more corrupt. And no surprise the courts refused to uphold the law when a challenge was made to the signing of the six EU treaties, which illegally abolish Britain’s sovereignty.

It is close to controlling Plymouth City Council, where it has subverted the democratic process. Local people cannot get CP’s corrupt activities published because the editors of local papers are in CP, and refuse to let journalists publish the articles.

CP started in 1985; in the 1990’s, with its members’ cross-departmental influence, it was involved with what then became the disastrous New Millennium Dome Company and the squandering of £800 million; it appears £300m of this was diverted into the web of quangos set up by CP. There is a fraud case over this, stalled in the courts thanks to CP’s influence in the legal profession.

Over £100 million of our money has been spend on CP courses alone, and its been hidden from the public, and members’ names are a guarded secret. It charges substantial figures for its courses. Matrix for example costs £3,950 plus VAT, and courses for the high flying ‘leader’ can be as much as £9,950 plus VAT. This money is ours, paid by government departments financing senior staff to become agents for CP, instead of loyal to their own jobs.

Common Purpose (Ltd by guarantee, No. 2832875) is registered as charity No. 1023384. It describes itself as being involved in Adult Education. Given it preys on the rich and powerful, charges expensive fees, and its aims are clearly power and control, its charity status stinks and should be revoked.

Potential Common Purpose subjects are selected for training. Are they susceptible to being converted? Are they in the right job, with the right colleagues and friends? Do they have power, influence and the control of money? If the candidate has some, or all of these key attributes, then the local Common Purpose Advisory Board decides if they can do the course.

(ER: the list of former CP participants by year and region actually offers some interesting insights into their recruitment vision. School-attending adolescents have also been recruited from various schools since the early ’90s. See this page for those wishing to explore further  https://www.cpexposed.com/graduates)

Trained leaders are encouraged to act as a network, enable other members’ plans, and have meetings under the so-called Chatham House rules. This effectively means their statements are not attributable to them, nor can attendees reveal information heard at a Common Purpose meeting.

Council Officers are having secret meetings with, for example, property developer Common Purpose friends. No agendas and no minutes. Common Purpose Graduates from the public quango sectors such as the Regional Development Agencies attend, and have the power to award large sums of public money to projects.

It is the worst national example of cronyism, closed contract bids, fraud and corruption. And unseen to the general public.

Common Purpose specifically targets children from the age of 13, and more recently younger, for special leadership and citizenship training. Yes, it is active in schools, and again the average parent has no idea.

People have contacted us to speak of their experiences with Common Purpose. A common theme is it’s all sweetness and light, until you fail to follow the direction set by the CP leadership.

Then interesting things happen. Ladies in particular have been bullied at work, some have lost their jobs, some have become paranoid and depressed at the pressure from people ganging up on them.

A typical story is a husband describing the decline in his wife from the time she becomes a Common Purpose graduate. Loss of sparkle, enthusiasm, anxious and ‘changed’, and she initiated a divorce.

Other Common Purpose people lie when they are challenged as to their involvement.

Common Purpose candidates are given a two day residential course in which they are ‘trained’ in a closed residential environment, such as a small hotel. They are encouraged to reveal personal information about themselves, such as their likes, dislikes, ambitions and dreams. Discussions are then controlled by the course leaders. Some participants have likened this to the Delphi technique or the application of group psychology such as Cognitive Dissonance or brainwashing.

Treason, subversion and deceit at work with a Common Purpose to destroy the UK and establish the EU Soviet.

EU funding is used as the fuel to power the set up of EU government in countries and as the fuel for fraud and corruption. Once a country and businesses ‘suck on’ EU funds, they are effectively bought. By this means the EU can control businesses, regions and Countries.

The EU plan has been very simple and very clever. First, set up via the traitors within UK national government’s Regional Development Agencies. These were designed to be smooth as silk and sweet as honey – to do all things good, e.g. regeneration, helping communities, helping business, innovation, entrepreneurship etc etc.

Next, load the honey trap with large amounts of money so that people, organisations are attracted to the honey pot. As more people are attracted, increase the powers of the RDAs to include planning powers and input. Make it compulsory for City Councils, County Councils and District Councils to consult them, and then their power increases further. And with planning powers, they can get their organisational snouts into virtually every walk of life.

Now the clever bit. In the background the traitors now work to introduce the Regional Assemblies. At first un-elected and informal, so as to allay fears and ease doubts as to their true purpose. Then the ‘behind the scenes traitors’ start to work to make them elected using large amounts of UK public money and EU funds.

The process will use anybody it can to sweeten the pill. The church for instance. What friendly vicar would help set up a devious political con. You can trust us, they say. So interesting that the many Bishops, including the then Bishop of Exeter, worked so hard to help set up and implement the SW Regional Assembly for example.

Since all of these bodies, that is the Government Offices of the Regions, the Regional Assemblies and the Regional Development Agencies are accountable to the ODPM, it is quickly evident that the real plan has been to set up a parallel EU government structure in the UK. Set up by deceit and deception. By making sure that these bodies have the ability to use massive amounts of funding and staff, they can now start to run amok over our traditional democratic structure of local government.

The EU grants and funding keeps pouring in. Take the £320m of Objective One in Cornwall. Nobody really knows where that money was spent, except that it was frittered away in remarkably small sums – £500,00 and £150,000 here, £60,000 there etc, etc. By this means, and particularly with minimal proper accounting and probity checks, the money reaches back pockets, favoured consultants and the dishonest. The breeding ground for fraud and corruption has been created, and not surprisingly fraud and corruption begin to run rife. With it comes the added nastiness of threats, intimidation and bullying of those who hold up their hand and say ‘look, this is illegal’. 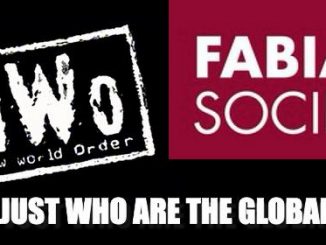 Understanding The Tactics Of Subversive Globalism & The Fabian Agenda