David Maetzu, a Spanish tech lawyer, questioned the legality of the survey on its website, saying it “raised complex legal problems regarding the applicable regulations.”

On his Twitter account, the lawyer explained that traffic, location, and identification data could only be transferred to certain authorized third parties — and the INE was not among them.

Millions of Spaniards are being tracked on their mobile phones this week as part of a controversial government study designed to gather information about where citizens are traveling and when in order to “improve public services.”

The National Statistics Institute (INE) has assured people that the eight-day project is completely “anonymous” — but that hasn’t stopped concerns being raised over the ‘spy state’ and ‘big brother’ style privacy issues.

Spain’s three largest mobile phone operators — Movistar, Vodafone and Orange — are taking part in the project, and insist they are not breaking the law by handing the data over to the government. The three companies account for almost 80 percent of mobile users in Spain. 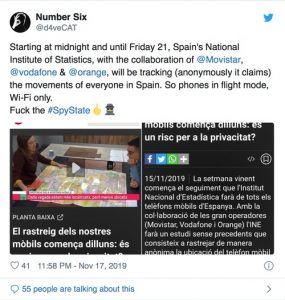 With the information available, it will be possible, for example, to see “how many mobiles there are at 5 PM on a particular street in any city of more than 15,000 people, but no more than that,” the INE told El Confidencial.

To conduct the research, the agency has divided the country into 3,200 cells, with over 5,000 people in each one. Trackers will be able to figure out how many phones there are in each cell at certain times throughout the day. First, phones will be analyzed between midnight and 6 AM in order to decipher where phone users live — and then again between 9 AM and 6 PM to discover where they work or go during the day.

The results will be used in the 2021 census and will reveal which daily travel routes are most used, which locations are most common for holiday vacations, as well as information on how many people work or study long distances from their homes. The government will pay each of the three major operators about €500,000 each to gain access to the valuable information, it is reported.

Unsurprisingly, the plan hasn’t exactly been received well by many Spaniards on social media.

“I have not given you my consent, you are robbing me with the corresponding profit of the telephone companies,” one person wrote, advising Spaniards to seek out phone companies not taking part in the study.

One tweeter responded to an INE post about the study with details of his schedule for the day “to make life easier for Big Brother,” while others said that if the government wanted information on citizens’ travel for the census, they should “ask” for it rather than “steal” it through such a study.

Some people warned that they would put their phones on airplane mode during the study. Spanish media has also published information explaining how phone users can avoid being tracked at the allotted times.

In order to be exempt from the study, people must visit the website belonging to their phone provider and “expressly request” that their data not be included, one website explained. Alternatively, people can simply turn off their phones, remove their SIM cards or, as some tweeters suggested, switch to airplane mode. 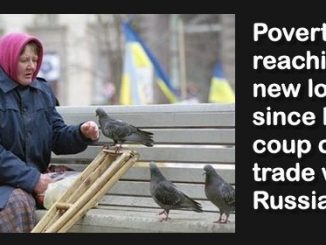