This issue has been ongoing for many months for parents of children at Parkfield Primary School in the Saltley area of Birmingham. Parkfield Primary is located in a predominantly Muslim area and is rated as an outstanding school by the UK government’s education watchdog, Ofsted. Presumably through the 2018-19 school year, a program called No Outsiders has been taught to children from around 5 years old, the age at which UK children begin public or ‘state’ school. No Outsiders, claim protesting parents, is teaching their children that homosexual lifestyles are acceptable. Teaching materials show children being taught about male homosexuality through animal characters, same-sex parenting, and cross-dressing boys. Parents want their religious beliefs protected (largely Muslim but also Christian) and don’t want their children to be sexualised, all of which seems eminently reasonable.

To whom does a child belong? The family or the state?

In this so-called ‘open’ and tolerant society, where is freedom of religious belief?

This article by the Guardian (severe MSM warning) titled School defends LGBT lessons after religious parents complain dates from the end of January 2019. Back then, 400 parents (the school accommodates around 750+ students) had petitioned the school to stop the program. By March, following weekly protests by parents and 600 students being pulled from the school for a day, it was agreed to stop, or at least suspend, the teaching of the program, which saw parents cease their protests. See this by RT: Birmingham school to indefinitely suspend LGBT lessons for kids after parents’ anger.

And back in March, a contagion effect started to happen via social media with protesting parents linking up on WhatsApp to produce a protest group in Manchester. Parents in other cities, such as Oldham, Croydon, Blackburn and Bradford, have also been communicating their concerns through social media.

As the RT report below makes clear, 70 schools in the UK have been getting blowback from parents and now Catholic groups are promising to join the fight against the curriculum in September. This BBC report (another MSM alert) from May indicates that protests are indeed set to mount: LGBT school lessons protests spread nationwide. Secondary schools in the UK will see this LGBT indoctrination begin in earnest in September of next year: “Compulsory relationship and sex education lessons are due to start in all secondary schools in England from September 2020.”

UK schools that teach LGBT lessons are neglecting the religious beliefs of parents, a protest activist told RT. Britain’s anti-extremism body has criticized the government for being “too slow” to quell outrage over the issue.

In Birmingham, dozens of Muslim parents are rallying in front of a school that started offering LGBT equality lessons. They demand that teachers stop using storybooks they say proselytize same-sex relationships and a homosexual way of life.

“We need to devise a program with parents, with the schools, with Ofsted [the Office for Standards in Education] and the [Department for Education] to have a program that allows… schools to stop discrimination but not by infringing on parent’s [religious] beliefs,” Shakeel Afsar, activist and protest coordinator, told RT.

Where the schools have gone wrong is that “they have not consulted parents in a meaningful way,” he said.

The protests initially started in Birmingham earlier this year and steadily spread across England. At first, they involved predominantly Muslim parents, but now Catholics are also joining in. As the outrage mounted, the government began voicing unease over its scale and reach.

On Monday, Sara Khan, the head of the Commission for Countering Extremism, accused the Department for Education of being “too slow to respond” to the snowballing protest. The DfE “could’ve done so much more” to explain to parents that “this is what’s actually being taught, not the misinformation that we’re seeing out there.” 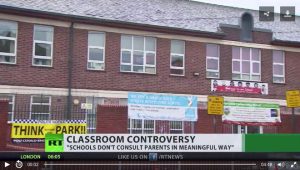 And so it begins: Mother, Daughter Sue France Over ‘Air Pollution-Related’ Illnesses