Bannon Sets Up For EU Showdown With George Soros

Steve Bannon plans to lead a populist revolt throughout Europe which, if successful, will crush George Soros and his network of open-border NGO’s to smithereens, according to the Daily Beast.

And just how does the former White House chief strategist and Goldman Sachs alum plan to do this? 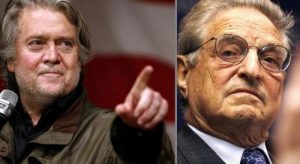 Bannon will set up a Brussels-based non-profit NGO called “The Movement” which will go head to head with Soros – with the goal of uniting like-minded European parties and various conservative think tanks along with other support structures.

The non-profit will be a central source of polling, advice on messaging, data targeting, and think-tank research for a ragtag band of right-wingers who are surging all over Europe, in many cases without professional political structures or significant budgets.

Bannon’s ambition is for his organization ultimately to rival the impact of Soros’s Open Society, which has given away $32 billion to largely liberal causes since it was established in 1984.

Over the past year, Bannon has held talks with right-wing groups across the continent from Nigel Farage and members of Marine Le Pen’s Front National (recently renamed Rassemblement National) in the West, to Hungary’s Viktor Orban and the Polish populists in the East. –Daily Beast

In other words, everyone who doesn’t like largely unchecked human trafficking of migrants into Europe via Soros-funded NGOs which operate throughout the Mediterranean.

Bannon is looking to establish a populist stronghold within European Parliament which could gain as many as a third of the lawmakers following next May’s Europe-wide elections. As the Beast points out, “A united populist bloc of that size would have the ability to seriously disrupt parliamentary proceedings, potentially granting Bannon huge power within the populist movement.”

Depending on electoral law in individual countries, the foundation may be able to take part in some campaigns directly while bolstering other populist groups indirectly. –Daily Beast

“I didn’t get the idea until Marine Le Pen invited me to speak at Lille at the Front National,” recalled Bannon. “I said, ‘What do you want me say?’”

While The Movement is in its infancy, the wheels are already in motion to hire a full-time staff of at least 10 for Bannon’s Brussels, Belgium headquarters in coming months – including a polling expert, a communications person, an office manager and a researcher. If all goes according to plan, the organization will grow to 25 people post-2019. 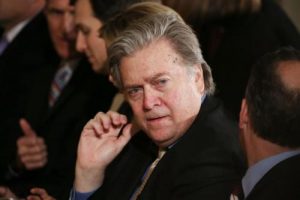 In order to carry out his plan, Bannon will spend at least half of his time in Europe, mostly in the field, once US midterm elections are over in November. The Movement will also serve as a link between the pro-Trump freedom caucus in the US and Europe’s populist movement.

Bannon and Raheem Kassam, a former Farage staffer and Breitbart editor, set up shop in a five-star Mayfair hotel for a week while Donald Trump was visiting Europe. Between TV appearances as Trump surrogates, they hosted a raft of Europe’s leading right-wingers at the hotel. –Daily Beast

“It was so successful that we’re going to start staffing up,” said Bannon. “Everybody agrees that next May is hugely important, that this is the real first continent-wide face-off between populism and the party of Davos. This will be an enormously important moment for Europe.”

Oh, and Bannon is going to use German chancellor Angela Merkel as “the perfect foil to help accelerate that dynamic in Europe,” writes the Beast. After President Trump called Merkel out at a NATO summit earlier this month, Bannon hopped on the bandwagon saying: “This is the lie of Angela Merkel. She’s a complete and total phony. The elites say Trump is disruptive but she’s sold out control to Russia for cheaper energy prices.” 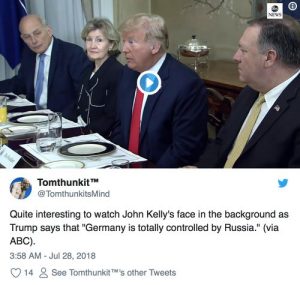 He describes Merkel and Emmanuel Macron, the French president who crushed Le Pen in a runoff election last year but has since flagged in the polls, as vulnerable figureheads of establishment Europe. With Britain voting to quit the E.U., Merkel and Macron’s vision of a united continent will be put to the test at next year’s elections.

Bannon is convinced that the coming years will see a drastic break from decades of European integration. “Right-wing populist nationalism is what will happen. That’s what will govern,” he told The Daily Beast. “You’re going to have individual nation states with their own identities, their own borders.” –Daily Beast

During his visit, Bannon took a side-trip to the 800-year-old Trisulti monastery under development by conservative UK catholic Benjamin Harnwell – who runs a conservative Catholic organization, the Dignitatis Humanae Institute – “founded to help Christian politicians defend their faith in the public square.”

The monastery will host events with speakers like Bannon and Burke and conservative Christian leaders.

Harnwell and his organization are an important connection between Bannon and Burke. Harnwell is the one who first introduced the two, according to a New York Times article that is displayed on Harnwell’s website. Bannon spoke at one of Harnwell’s’ conferences by grainy video link back in 2014 during which he warned that the migration exodus would lead to a rise in populism. Burke was the keynote speaker the year before. –Daily Beast

Cardinal Burke, meanwhile, is one of the pope’s harshest critics – openly challenging Francis’ ability to lead the church while campaigning for limitations on papal powers. Burke has openly called Islam a threat, and is an open supporter of President Trump.

Francis, pushing back against the mounting Catholic coalition against his open-border policies, has been particularly vocal of late on the issue of migrants – both in regards to Italy’s closed ports and the US-Mexico border controversy over migrant children being separated from their families (meanwhile 80% of migrant children are unaccompanied – meaning their parents chose to separate from them when they shoved them across the border with a human trafficker).

“I would like to point out that the issue of migration is not simply one of numbers, but of persons, each with his or her own history, culture, feelings and aspirations,” Francis said last month. “These persons, our brothers and sisters, need ongoing protection, independently of whatever migrant status they may have.”

Liberals in Europe, meanwhile, are fuming over Bannon – with EU Parliament center-left politician Udo Bullmann branding Bannon’s plan as “an attack on freedom and democracy in Europe,” and vowing a “response” to Bannon’s planned NGO (which, ironically would be an attack on the freedom of populists in Europe who wish to coordinate efforts).

Liberal Belgian politician Guy Verhofstadt, leader of the Alliance of Liberals and Democrats for Europe (ALDE) and MEP, wants to “ban Bannon” from Europe completely in order to stop his “hate” speech.

“Steve Bannon’s far-right vision & attempt to import Trump’s hateful politics to our continent will be rejected by decent Europeans. We know what the nightmare of nationalism did to our countries in the past,” Verhofstadt tweeted. 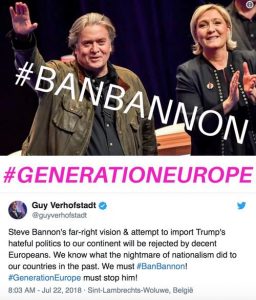 Or, perhaps Bannon’s European partners aren’t interested in their countries having their very own Wikipedia entries for “grenade attacks” and other recent phenomena. 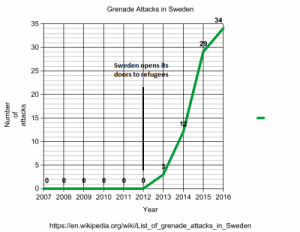 Reflections on the Impact of COVID-19 [VIDEO]

Meet Lord Malloch Brown: The British Hand Behind The Coup To Oust Trump