ER Editor: While retaining the title of Paul Craig Robert’s excellent piece, we’ve collapsed two articles in one here, exploring the cultural and economic aspects of life in American communities.

America Is No Longer A Nation

The America in which I grew up and lived my early adult life was a nation. Over the course of my life I have watched my country turn into a Tower of Babel. Homogeneity and shared values permitted us to understand one another. This doesn’t mean that there was uniformity or that things were perfect. A Baptist wasn’t a Catholic. A WASP was not a black laborer. A female was not a male. Blacks and poor whites had a hard time becoming middle class, but it could be done. It was possible for middle class people to become “well off,” but difficult to become rich. Immigration was controlled, and the reduction of inflows had helped the Irish and Italians to integrate into society.

Police were helpful and didn’t burst into homes with guns blazing or rough you up on traffic stops. On important issues, compromises could be reached and reforms implemented. English was the language. If you telephoned a service provider, utility, or bank, you quickly were connected to a real person capable of handling every aspect of whatever you were calling about. Today you wait through the Spanish language option for the robo-voice listing the options that might have something to do with the reason for your call. The companies save money and make profits by imposing their service costs on customers.

Technology seems to have worsened the functionality of society. Diversity and multiculturalism definitely have. It used to be that taking or giving offense was something that good manners prevented. Today, members of those groups that are entitled to be offended are ready to take offense at any excuse. Today, it is easy for a white person and a male to give offense without intending or even knowing that what he did or said was offensive.

Diversity and multiculturalism provide a fertile field for Identity Politics. Identity Politics has succeeded in turning everything white into racism. Indeed, the word “white” is now a code word for racist. Western Civilization and science itself are explained as mechanisms of white domination. The other day, a black female college professor declared time to be white. She explained that a tendency on the part of blacks to be late was due to the fact that time was just another white racist construct. Time was white because it made blacks late.

According to Identity Politics, white people are in charge, but the evidence is to the contrary. There are no quotas for whites in university admissions, hiring, and promotion. It is the allegedly victimized “preferred minorities” who get to go to the front of the line. There are no hate speech or hate crime protections for whites. Whites can be called every hurtful and offensive name in the book and have no right or power to demand apologies or the firing of the offender. White DNA has been declared to be “an abomination,” and white people “shouldn’t exist.” In America today, the way to get ahead is to claim victimhood. Jews are experts at this, and blacks, women, and illegal immigrants have learned the same trick.

University education explains white people as the source of all evil. This is especially the case in what is called black studies, and in gender studies, which seems to have developed out of women’s studies or feminist studies. A white male professor who gives a low grade to a female or to a black can expect that some charge might be made against him, but a white male who receives a low grade from a black or feminist professor has no such recourse.

As whites still constitute the majority of the U.S. population, what are the consequences for society when it is the majority that is constantly demeaned? What does it mean when white males, still the backbone of the military, are more easily cowed than women and “preferred minorities”?

When whites become a minority, what is their fate when the new majority has been taught hatred of whites for decades?

What does it mean when Americans fall all over themselves to apologize for using some word or term that someone finds “offensive” when it never occurs to Americans to apologize to Libyans, Iraqis, Syrians, Afghans, Yemeni, Somalis, for destroying the lives of hundreds of thousands of them? The disconnect here is extreme. Words hurt but not bombs. Moreover, I can remember when words now said to be offensive gave no offense to anyone. What has happened is that people have been taught to regard the words as offensive. How else did “girls” become offensive? Identity Politics finds more offensive words every day. Before long a white person will not be able to open their mouth. Language itself is being made dysfunctional. If the means of communication is dysfunctional, how can society be functional?

Identity Politics has produced disunity. Disunity is the antithesis of nationhood.

On April 10, the Center for Jewish Civilization at Georgetown University is hosting an all-day propaganda session at the National Press Club to work up opposition to white gentiles who are allegedly using Nazi techniques to attack Jews and blacks. In other words, the Center for Jewish Civilization is doing precisely to white gentiles what the center claims white anti-semites are doing to Jews and blacks. The “conference” is focused on “How Do We Deal with a New Ecosystem of Hate and Anti-Semitism on the Far Right?”

We all know what the “far right” is—white people, which as a group are being recast as “white supremacists.” Far right is not a term ever applied to blacks or other races.

Try to imagine a Center for Palestinian Civilization at Georgetown University that was hosting a National Press Club all day event to combat an “Ecosystem of Hate and Anti-Palestinianism in Israel.” The center would be lumped in with the Alt-Right and accused of promoting hate and anti-semitism.

Or suppose U.S. foreign service veterans formed a Center for American Foreign Policy and criticized Israel’s control over American Foreign Policy revealed in Netanyahu’s boast that at his request Trump named Iran’s Revolutionary Guard, a large chunk of the Iranian government, as a terrorist group. https://news.antiwar.com/2019/04/08/netanyahu-says-trump-named-iran-guards-a-terror-group-at-his-request/ The center would be accused of anti-semitic tropes.

How is a country a nation when it cannot have its own foreign policy, when words of its language are proscribed, when alleged victim groups have more rights than the alleged dominant class, and when hate is used to create disunity?

Identity Politics is the ideology that has been used to break America into disunited pieces.

Why Are American Communities Dying?

Most Americans who have been around for a while know life is nothing like it used to be. When someone wanted a job, one was found with a little bit of searching. Today jobs are difficult to find, especially in small communities.

A nation’s wealth is derived from having a product to sell. That wealth needs to circulate in towns and cities to compound the wealth effect and create jobs and businesses. When wealth is not created or it is siphoned off to other places, the wealth effect cannot happen, and in many cases goes into reverse. A community needs a certain amount of service-related jobs to function, but it also needs some type of production jobs to bring in money from the outside. This can be mining, agriculture or manufacturing type jobs, but they must exist to insure a healthy economy.

America has two major problems today. A large amount of our production is done outside the country, eliminating production jobs in local communities, and many of the small local businesses that kept wealth within communities have been supplanted by large corporations that siphon wealth out of communities and send it to Wall Street.

In the past when a small business made profit, that profit was kept in the local community because that is where the owner lived. Now, that profit leaves the community never to be seen again. With less money to circulate within the community, the businesses that depend on people spending their extra dollars have fewer customers and eventually go out of business. With fewer jobs there is that much less money circulating, and the economic situation spirals down until nothing is left.

To some extent we are seeing this happen now in many places. Corporate stores moved in and drove small local businesses out. Then, when the profits dried up, the corporate stores closed leaving the community with no jobs or products to buy. With no capital in the local communities to rebuild small businesses, the people simply drive to other areas to do their shopping.

The corporate cronies and government laggards control most of the money flowing through communities now and they want to keep it that way. Any attempt to rebuild local businesses is met with luke warm results. Any business that might make a difference is either killed outright or regulated into oblivion before it can get off the ground. The county where I live has all but abandoned local businesses. The bulk of their income comes from property taxes generated by vacation homes and retirement homes of retired government employees. As long as the government pensions and paychecks continue, they see no reason to change the status quo. The result is that the younger people leave as soon as they can, and the average age of the population continues to get older. As with many places today, this area has no future.

Where I live is a microcosm of the nation. Corporate and government entities continue to siphon what little money there is out of communities, and just as small communities are dying, the nation will soon follow if current trends do not change. A return to small local economics is the only way to reverse some of the damage and keep our communities livable. But, do not be deceived. There is no way to undo all of the damage that has been done, and even if we survive, we will only be a shadow of what we once were as a nation. 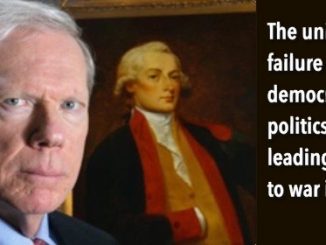 How Much Death & Destruction Awaits Us in 2018? 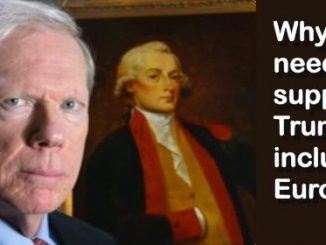 Paul Craig Roberts Asks “Can We Survive Our Collective Stupidity?”