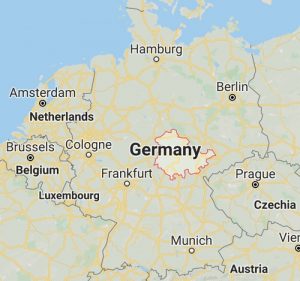 As a reminder of a fairly complicated situation, Thuringia (see map) held regional elections last October, in which Eurosceptic parties from both left (Die Linke) and right (AfD) beat the established centrist parties the CDU (Merkel’s) and SPD. It was historic: The parties standing for globalism, mass migration, neoliberalism and ‘more EU’ got trounced. A coalition had to be formed out of so many different parties, yet nobody wanted to work with the ‘fascist’ AfD, the party that actually came in SECOND, behind Die Linke. A governing coalition got formed just 2 weeks ago, of Die Linke, SDP and the Greens. But several rounds of voting to produce a leader of the new government ended with one Thomas Kemmerich (see featured meme) getting elected from a minority party, ousting the Left’s Bodo Ramelow in the 3rd round of voting. Problem: Kemmerich was able to pip Ramelow at the post because of vital support from the dreaded AfD. (Some of those votes supporting Kemmerich came from Merkel’s own CDU, hence CDU and AfD members were actually voting on the same side, against CDU party recommendations.) All of which prompted a great hue and cry, with MSM outlets invoking the Holocaust narrative. Kemmerich obliged by stepping down, making way for another leadership vote.

Now, the AfD is demanding Merkel be accountable for this, arguing that Kemmerich was ‘coerced’ because Merkel had made strongly disapproving comments publicly while on a trip to South Africa and Angola, where she was speaking as Chancellor, not from any position she holds within the CDU party (which she no longer does). See also this RT piece titled German AfD vows to take Merkel to COURT over ‘abuse of office’.

In the case of the Thuringian Prime Minister Thomas Kemmerich (FDP), who was forced to resign, the AfD has announced that it will report Chancellor Angela Merkel (CDU) for coercion.

The federal executive board of the AfD had decided to file criminal charges against the Chancellor in accordance with paragraph 106 of the Criminal Code (coercion of members of a constitutional body).

The background is Merkel’s comments during her trip abroad to South Africa. There she commented on Kemmerich’s choice by saying that the process was “unforgivable” and the result had to be “reversed”. A little later Kemmerich announced his resignation.

The AfD sees this as an abuse of office by the Chancellor. Merkel no longer holds any relevant function in the CDU and has apparently not expressed herself abroad as a CDU member, but as the head of the German government. “Ms. Merkel must also abide by the law and cannot force the prime minister, who has been democratically elected in the manner of a federal state, to resign,” AfD chief Jörg Meuthen told Berlin weekly Junge Freiheit.

As announced by the AfD, it therefore decided to file a legal warning with an injunction against the Chancellor for abuse of office. 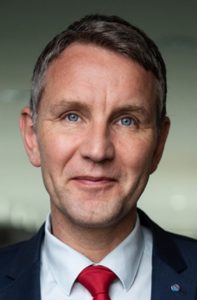 The Thuringian AfD chief Björn Höcke (pictured) also wants to report Merkel for coercion. He also freely elected Kemmerich as a member of parliament. Höcke referred to a report in German daily Die Welt that Merkel had threatened the FDP (ER: elected leader Thomas Kemmerich’s party) that the CDU would end the two state governments with the FDP in Schleswig-Holstein and North Rhine-Westphalia if Kemmerich did not resign immediately.

However, Merkel was no longer the CDU chair, but had done so in her role as chancellor. “It is nothing more than a coup by the Chancellor against a constitutional body in the state of Thuringia,” Höcke underscored. In view of this, one cannot simply ignore the facts.

The SPD in the state parliament of North Rhine-Westphalia has meanwhile called for a ban on legislative decisions if they only get the necessary majority with the votes of the AfD. The SPD made a corresponding urgent request on Monday in the Düsseldorf state parliament.

In view of the volatile mood in the country, a quick and clear commitment of the state parliament is needed, the SPD said in justifying its concern. “The AfD must not represent a power option of any kind for any democratic party or parliamentary group in North Rhine-Westphalia. That is a basic question of democratic self-image,” the party noted without irony.

However, the proposal will not be put to the vote this week. The President, in agreement with the Presidium, decided not to allow any urgent request for this plenary week, a spokesman for the Landtag said when contacted by Junge Freiheit.

It is unclear how the SPD’s request can be reconciled with the state constitution. This guarantees the MPs a free mandate. The state constitution of North Rhine-Westphalia states: “The MPs vote according to their free conviction, which is determined only by consideration of the well-being of the state of North Rhine-Westphalia; they are not bound by orders.”

Merkel herself has been pursuing the same argument as the SPD by accusing the AfD of wanting to “destroy democracy”. (ER: we cannot help but chuckle at this one!)

“The AfD has a very clear agenda,” said Merkel on Tuesday, according to the dpa, at a meeting of the Union faction in the Bundestag. “And this agenda is also a particular challenge for us, especially when it comes to the CDU, because it is very clear that democracy is to be destroyed,” warned the Chancellor. This attempt to undermine democracy can be seen in “every session of the Bundestag”.

But it was the chancellor who was in contact with the Left Party ex-Prime Minister Ramelow at the special meeting of the coalition committee last Saturday.

Political scientist Benjamin Höhne said strengthening ties between the CDU and the AfD should be seen as a natural process. In other European countries, cooperation between conservatives and right-wing parties is “quite normal,” he told the MDR. “So far this has been an exception in Germany. So the question arises, why should Germany continue to be an exception?”

The succession plan which Chancellor Merkel carefully set into motion one year ago collapsed on Monday when her replacement, Annegret Kramp-Karrenbauer, suddenly announced she would resign as leader of the Christian Democratic Union (CDU) party.

Dr. Knut Wittkowski Strikes Again: ‘We could open up again and forget the whole thing’