ER Editor: We also recommend this piece by the Electronic Intifada from January 18, 2019 titled Justin Trudeau’s pack of lies about BDS, and this from March 2, 2018, 80 percent of Canadians back Israel boycott — poll. Independent Jewish Voices (IJV) of Canada are not happy with the latest move by the Canadian government. See IJV Urges The Canadian Government To Reconsider Its Use Of The IHRA Definition Of Antisemitism.

The British Columbia Civil Liberties Association says the definition is “is extremely vague, open to misinterpretation” and a “threat to freedom of expression.”

Israel lobby groups hope, however, that by adopting the International Holocaust Remembrance Alliance’s “working definition” in full, it will be easier for Canadian authorities to demonize and crack down on campaigners who call for Israel to respect Palestinian rights or who oppose Israel’s state ideology, Zionism. 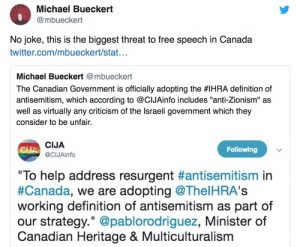 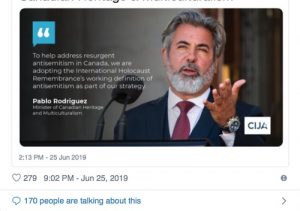 Israel lobby groups – which have pressured Canada and other governments and institutions around the world to adopt the IHRA definition – celebrated the news. 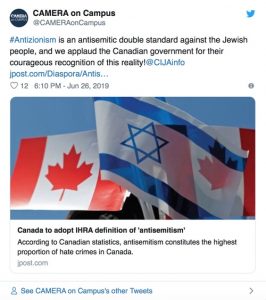 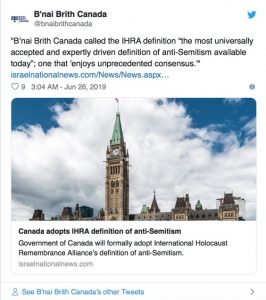 B’nai Brith Canada claimed that the IHRA definition is “universally accepted” and “enjoys unprecedented consensus” – but human rights and civil liberties advocates in Canada, the UK, the US and elsewhere have long challenged IHRA’s conflation of Zionism and Judaism in order to suppress speech critical of Israel. 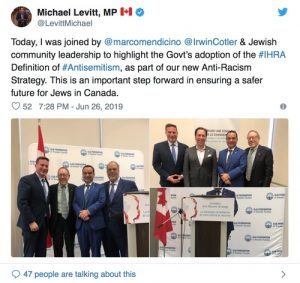 Irwin Cotler, Canada’s former justice minister and a high-profile figure in the country’s Israel lobby, attended the launch of the government strategy that includes adopting the IHRA definition.

Cotler was the focus of a recent protest over his adamant refusal to condemn Israeli war crimes and human rights abuses against Palestinians.

Israel lobby group CIJA lauded the Canadian government for adopting IHRA, and claimed that the definition “definitively and explicitly recognizes that anti-Zionism is a clear and unequivocal expression of antisemitism.” 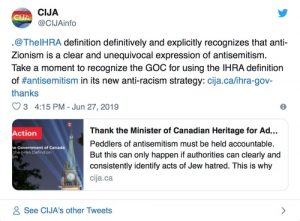 That claim goes far beyond what the IHRA definition actually states; however, CIJA’s assertion is a clear indication of the extreme way Israel lobby groups hope the definition will be interpreted – effectively to shut down criticism of Israel’s state ideology under which Palestinian refugees are barred from returning to their homeland solely because they are not Jewish.

The equation by Israel lobby groups of anti-Jewish bigotry with anti-Zionism has been denounced by many international Jewish organizations.

Activists with Independent Jewish Voices Canada warned earlier this month that the adoption of IHRA “is a threat to free speech, academic freedom, and freedom of dissent.”

The primary goal “is to ban or criminalize deep criticism of Israel and Zionism, and suppress support for Palestinian rights,” IJV stated, adding that their members and supporters “know that being Jewish and supporting Israel are two separate things.” 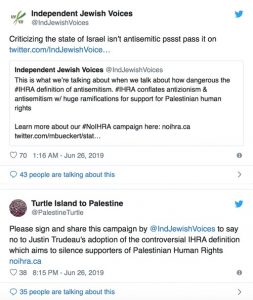 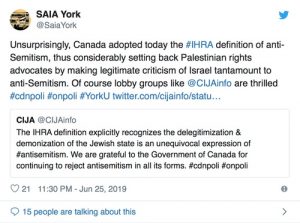 A petition sponsored by Independent Jewish Voices has gathered more than 600 signatures urging the parliament to reject the definition and support initiatives to “defeat white supremacy, anti-Semitism and all forms of racism” and to “uphold the equality and human rights of all people in Canada, in Israel-Palestine and around the world.” 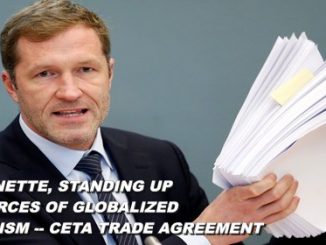