But could it backfire?

Zionist pressure groups are crowing with delight at the decision by the Equalities and Human Rights Commission’s to investigate anti-Semitism within the Labour Party.

Board of Deputies president Marie van der Zyl welcomed it:

“In the past four years we have seen a large number of cases of anti-Semitism throughout the party from bottom to top. Despite the Jewish community demonstrating in their thousands outside Parliament, this has still not been addressed seriously by the party leadership.”

The Jewish leadership Council issued a statement on what it called the Labour Party’s unlawful discrimination against Jewish people:

“We have drawn public attention over the last year to the leadership of the Party’s failure to address the anti-Jewish racism in the party. The fact that they have obfuscated, denied the problem and we have been accused of smears should be countered by today’s announcement by the EHRC. This is a very serious development.”

The EHRC for its part says it took the decision to investigate after receiving a number of complaints about allegations of anti-Semitism in the Party. The investigation will seek to determine:

The terms of reference also state that the investigation will focus on “the Party’s response to a sample of complaints of alleged unlawful acts”.

In the course of the investigation, the Commission says it may have regard to the IHRA (International Holocaust Remembrance Alliance’s) working definition of anti-Semitism and associated examples “while recognizing it is a non-legally binding definition”.

So perhaps the complainers shouldn’t celebrate too soon.

Two ‘sample’ cases that I doubt will be investigated

Some readers may remember that I conducted my own investigation last year into a small sample of anti-Semitic cases that turned out to be utterly bogus. Two Scottish Labour politicians, both regional councilors, had been accused of anti-Semitic remarks and were languishing, paralyzed, under the cosh of the party’s blundering, slow-motion disciplinary regime.

In the first case, Constituency party officials declared the councilor guilty and issued a press statement to that effect without waiting for him to be heard, hugely prejudicing any inquiry. His Council leader publicly called on him to resign as a councilor, saying his thinking belonged to the Dark Ages: “To smear an entire community both past and present, to say he has lost ‘all empathy’ for them is utterly deplorable,” he told the press.

What was the ‘crime’? The councilor had tweeted:

“For almost all my adult life I have had the utmost respect and empathy for the Jewish community and their historic suffering. No longer, due to what they and their Blairite plotters are doing to my party and the long-suffering people of Britain…”

The other councilor was accused of anti-Semitism by a former Labour MP who, in 2015, wrote to the Culture Secretary urging a debate to ban Hitler’s Mein Kampf, a best seller, and claiming many would argue that it is “too offensive to be made available”. He suggested there was “a compelling case for a national debate on whether there should be limits on the freedom of expression”.

A Tory MP then put the boot in, telling the media it was clear to the vast majority of people that the councilor in question was no longer fit to hold office and suspension didn’t go far enough.

What exactly was this councilors‘ crime’? She’d had the audacity to voice suspicion on social media that Israeli spies might be plotting to get rid of Jeremy Corbyn as Labour leader after three Jewish newspapers ganged up to publish a joint front page warning that a Corbyn-led government would pose an “existential threat to Jewish life in this country”.

She added that if it was a Mossad-assisted campaign to prevent the election of a Labour Government (which would be pledged to recognize Palestine), it amounted to an unwarranted interference in our democracy. For good measure she said Israel was a racist State and since the Palestinians are also Semites, an anti-Semitic State too.

Everyone and his dog, including the entire Labour Party and the Zionist movement, surely knew that in January 2017, a senior political officer at the Israeli embassy in London, Shai Masot (pictured below),had plotted with stooges among British MPs and other maggots in the political woodwork to “take down” senior government figures including Boris Johnson’s deputy at the Foreign Office, Sir Alan Duncan. And that Mark Regev, Netanyahu’s former chief spokesman and the mastermind behind Israel’s hasbara program of disinformation and dirty tricks, had recently arrived in London as the new ambassador.

Masot was almost certainly a Mossad asset. His hostile activities were revealed not by Britain’s own security services and media, as one would have wished, but an Al Jazeera undercover news team. Her Majesty’s Government’s response? “The UK has a strong relationship with Israel and we consider the matter closed.” But not everyone considered it closed, and at a Labour Party conference fringe meeting, Israel insider Miko Peled warned that “they are going to pull all the stops, they are going to smear, they are going to try anything they can to stop Corbyn…. the reason anti-Semitism is used is because they [the Israelis] have no argument….”

As for the councilor’s claim that Israel is a racist State, its discriminatory laws, ethnic cleansing and other brutal policies over 70 years make it obvious. And its new Nation State laws reinforce the fact. The councilor’s point about Semitism is also fair comment. DNA research shows that only a tiny proportion of Jews are Semitic (see for example the Johns Hopkins University study published by Oxford University Press) whereas most indigenous Arabs in the Holy Land, especially Palestinians, are Semites. ‘Anti-Semitism’, although meant to describe hatred of Jews, is a term that’s misused.

And what happens to the false accusers?

Remember the Tory MP who said the councillor wasn’t fit to hold office and suspension wasn’t good enough?  It turned out that he was chairman of the All-Party Parliamentary Group on British Jews which is funded, supported and administered by the Board of Deputies who were, and still are, a major player in the campaign to humiliate Jeremy Corbyn and weaken the Labour Party. I don’t suppose the Conservative Party took disciplinary action against him.

Both Scottish Labour councilors were suspended for months without a hearing, and the accusations against them paraded in public, seriously disrupting performance of their duties and their work on behalf of their constituents. One of them had to wait 16 weeks ‘under sentence’ and posted on Facebook:

“I can’t make any decisions about my personal, political, or professional future whilst this hangs over me. I am constantly tired and anxious, and feel I am making mistakes. I have lost paid work because of what has happened.”

In these two cases a simple, informal assessment at the outset would have shown no need for formal action. Councilors don’t ‘belong’ to the Labour Party or any other party; if they belong to anybody, it’s the public who elect them as their representative. Their right to free expression is guaranteed by international convention and domestic law. Labour (and the other parties) ought to heed the warnings by top legal opinion (for example Hugh Tomlinson QC and Sir Stephen Sedley) that the IHRA definition of anti-Semitism is “most unsatisfactory” and has no legal force, and using it to punish could be unlawful.

When a suspension is lifted, the Labour Party rarely issues a statement exonerating the wrongly accused. They are left struggling to re-establish their good name. The accuser, often motivated by political or racial malice or plain ignorance, gets off scot-free after causing untold damage and isn’t even disciplined.

Why, in the first place, take allegations of anti-Semitism seriously from bully-boys who themselves practice or support racism? And why suspend someone without first checking whether the allegations, on the face of it, are remotely valid?

There are within Labour’s ranks some who say idiotic things about Jews, gratuitously insulting them to the detriment of the campaign for justice in the Holy Land. Their remarks are so stupidly provocative that one suspects those making them are Zionist plants. OK, anti-semitic feeling is often brought on by Israel’s endless crimes and brutality. But what is the point of bringing up Hitler and the Holocaust when Israel is the perpetrator of more war crimes and other breaches of international law and human decency than you can shake a stick at?

The investigation needs to happen. I don’t suppose the two cases I looked at will be included in the EHRC’s ‘sample’. Nevertheless, the Labour Party must get its act together if only to protect the free-thinking innocent. This investigation may force it to. 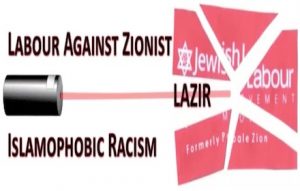 A piece of good news – maybe – for those under Zionist bombardment is the launch of a new campaign group, Labour Against Zionist Islamophobic Racism (LAZIR), which aims to build a network of Labour activists who will work to “kick Zionism out of the British Labour Party” and to “stop the creeping Zionism that pollutes politics in the UK”.

While insisting they are not anti-Jewish, they intend working against “the toxic Jewish Labour Movement” in a campaign to allow anyone to decry apartheid in Israel without being branded anti-Semites.

They set out 7 policies which, at this early stage, are perhaps best regarded as a work in progress. 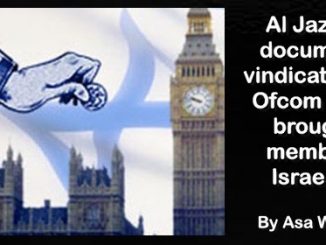 Vindicated in UK, Al Jazeera to reveal secrets of the US Israel lobby