ER Editor: As ever, we highly recommend Alexander Mercouris’ insights into this topic. See the video discussion below. Here are some of the major points raised:

The Duran’s Alex Christoforou and Editor-in-Chief Alexander Mercouris discuss Emmanuel Macron’s speech where the French President unveiled his nuclear doctrine advocating for a more coordinated European Union defence strategy in which France, the EU’s only post-Brexit nuclear power, and its arsenal holding a central role.

Macron warned all those in attendance that the European Union ‘cannot remain spectators’ in the nuclear arms race.

In a much anticipated speech to military officers graduating in Paris, Macron called on EU member states to play a more direct role in halting a new nuclear arms race, saying they “cannot remain spectators” against a threat to the continent’s collective security.

“In the absence of a legal framework, they could rapidly face a new race for conventional weapons, even nuclear weapons, on their own soil,” said Macron.

Setting out his country’s nuclear strategy in a bid to show leadership a week after nuclear-armed Britain officially exited the EU, Macron highlighted how France sees its nuclear weapons as a deterrent against attacks from belligerent foes.

Macron’s speech comes at a time when long-standing accords on limiting the growth of nuclear arsenals appear increasingly at risk.

The US and Russia have abandoned the Intermediate Range Nuclear Forces (INF) treaty, each blaming the other for breaching its limits, and Washington is threatening to quit the New START arms reduction treaty when it expires next year.

Add to that China’s bid for global sway, there is a strong need for Europe to ensure it does not find itself in the middle of a Cold War-style standoff “which could jeopardise the peace obtained after so many tragedies on our continent”, Macron said.

He warned of “the possibility of a pure and unrestrained military and nuclear competition, the likes of which we haven’t seen since the end of the 1960s”.

“The vital interests of France now have a European dimension,” said Macron, circling back to his central message of a need for a more coordinated European defence policy.

European nations should also insist on being signatories of any new deal to limit the development of new intermediate-range weapons, he noted. “Let us be clear: if negotiations and a more comprehensive treaty are possible… Europeans must be stakeholders and signatories, because it’s our territory” that is most at risk.

Friday’s speech was part of Macron’s long-running push for a stronger European defence, as US President Donald Trump has pulled away from European allies and admonished other NATO members for not paying more for their own protection.

Macron himself ruffled feathers last year when he noted that the lack of US leadership is causing the “brain death” of the military alliance. 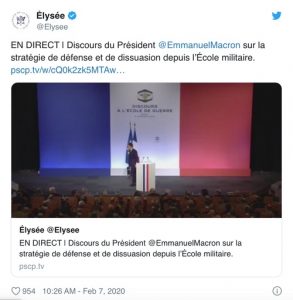 Reduced number of warheads and disarmament

France has already reduced the number of its warheads to under 300, Macron said, giving it “the legitimacy to demand concrete moves from other nuclear powers toward global disarmament that is gradual, credible and can be verified”.

But he stopped short of offering to share France’s nuclear deterrence capabilities, a pillar of its security strategy since implemented by Charles de Gaulle in the 1960s.

Germany in particular remains strongly opposed to atomic weapons, although a leader in Chancellor Angela Merkel’s party, Johann Wadephul, said this week that Paris should consider putting its arsenal under the auspices of the EU or NATO.

Macron invited European partners to engage in a “strategic dialogue” on the deterrent role of France’s nuclear capacity, as the country embarks on a costly modernisation of its arsenal.

“Our independence in terms of decision-making is fully compatible with an unshakeable solidarity with our European partners,” Macron said.

Macron also warned of the need for “a greater capacity for autonomous action by Europeans”, who must step up their military spending.

“Why are they not ready to make defence a budget priority and make the necessary sacrifices, even as the risks are growing?” Macron asked.

His speech came as a diplomatic freeze between the EU and Russia since Moscow’s annexation of Crimea from Ukraine has rekindled fears of fresh conflict along Europe’s eastern flank. (ER: As we have covered extensively, Crimea was not annexed by Russia!)

France has broken with some EU nations by recently reaching out to restore dialogue with President Vladimir Putin, who controls the world’s largest nuclear arsenal.

“There can be no defence and security project for European citizens without a political vision that seeks to progressively restore trust with Russia,” Macron said.

“We cannot accept the current situation, where the chasm deepens and talks diminish even as the security issues that need to be addressed with Moscow are multiplying.”

Macron did not specify whether Britain, Europe’s other nuclear power, should be part of the deeper EU cooperation now that is has quit the bloc.

But he noted that “since 1995, France and the United Kingdom have stated clearly there is no situation in which a threat to one’s vital interests would not also be a threat to the other’s.”

“Brexit doesn’t change this at all.” 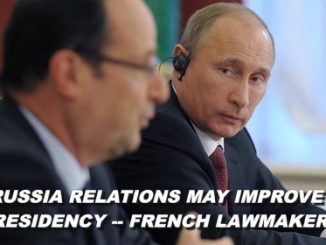