Washington, D.C. – Contained within WikiLeaks’ recent release of hacked DNC emails is a message from billionaire globalist financier George Soros, to Hillary Clinton while she was U.S. Secretary of State, that clearly reveals Clinton as a puppet of the billionaire class.

Found within the WikiLeaks’ Hillary Clinton email archive is an email with the subject ‘Unrest in Albania,’ in which Soros makes clear to Clinton that “two things need to be done urgently.” He then directs the Secretary of State to “bring the full weight of the international community to bear on Prime Minister Berisha” and “appoint a senior European official as mediator.” Revealing the influence he wields within the corridors of power, Soros then provides Secretary of State Clinton with three names from which to choose. Unsurprisingly, Clinton acquiesced and chose one of the officials recommended by Soros — Miroslav Lajcak. 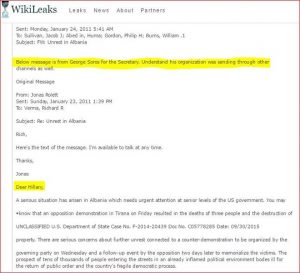 This is standard operating procedure for Soros. Anyone familiar with the history of the Soros Open Society Foundations in Eastern Europe and around the world since the late 1980’s, will know that his supposedly philanthropic “democracy-building” projects in Poland, Russia, or Ukraine in the 1990’s allowed Soros the businessman to literally plunder the former communist countries wealth, according to the New Eastern Outlook.

Soros-affiliated organizations are deeply connected to numerous color revolutions, the Arab Spring, and a number of other uprisings across the world. They have been intimately involved in the coup that took place in Ukraine, and subsequent ratcheting up of Cold War tensions with Russia.

In this particular instance, puppet master Soros instructs the U.S. Secretary of State that “the U.S. and European Union must work in complete harmony over this,” exposing how far his influence in international relations extends.

With the recent revelations about the pay for play scheme between the Clinton Foundation, numerous donors, and the State Department on display in the latest release of Clinton emails by the Judicial Watch organization, it has become exceedingly apparent that the U.S. policy under Clinton is variable depending upon whether you have contributed to the Clinton Foundation. 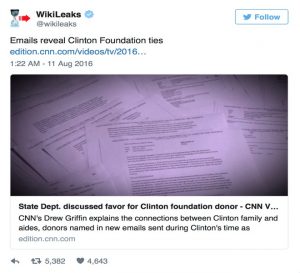 Tellingly, Soros has committed $25 million dollars to the 2016 presidential campaign of Hillary Clinton, which, per standard Clinton operating procedure, is indicative of the symbiotic relationship of favors between the billionaire and his political puppets.

With Clinton’s relationship with Soros on full display – taking donations and orders – Americans can be virtually certain that big money donations to the Clintons and their Clinton Foundation equate to official political favors from the U.S. government. The fact that Mrs. Clinton’s foreign policy decisions when she was secretary of state were being advised by an unelected globalist billionaire raises serious red flags.

Please share this article to inform people about the extent of the corrupt collusion between billionaires and their political puppets!

ER recommends other articles by The Free Thought Project

Jay Syrmopoulos is a journalist and political analyst living in Winona, Minnesota. He received his Bachelors in Political Science from Winona State University and is currently pursuing a Masters in Global Affairs from the University of Denver. Jay is a liberty activist dedicated to exposing the facade of reality by shattering the left right paradigm. 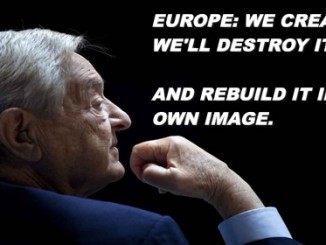 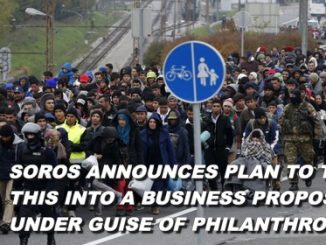