Why did the US exit INF Treaty? What you’re not being told

US Secretary of Defense Mark Esper is halfway through his tour of the Asia-Pacific region. The tour’s timing, coming just weeks after Esper was officially sworn in, affirms the notion that the Pentagon’s top priority is China.

“Whoever sheds his blood for me today shall be my brother” – the closing lines from William Shakespeare’s play ‘Henry V’. These same words also apparently mark a corridor in a Pentagon hallway which pays homage to the military cooperation of New Zealand and the United States, especially during World War II.

I didn’t know this, but I do now, thanks to US Secretary of Defense Mark Esper’s (pictured) recent statement as he arrived in New Zealand this week – part and parcel of a five-nation tour of the Asia-Pacific region which also includes Japan, Mongolia and South Korea.

Having only just been sworn into the job on July 23, the aim of the tour is mainly to recruit anti- 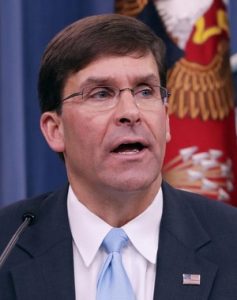 Chinese and anti-Iranian allies that the US can rely on heavily to defend its interests in the Asia-Pacific region. I would even venture to bet that the recent mass shootings in the US, in light of the Christchurch terror attacks in March this year, barely attracted a mention behind closed doors between Esper and New Zealand government officials. Quite a risky contention, but I will find out if my assertion is true in about twenty working days as I have already requested the briefing notes from the meetings.

Despite the heavy focus of the US government and the mainstream media regarding Iran and the Gulf region of late, I also suspect China would be more of a focus for official talks with Esper than Iran would be. Countries like New Zealand are more than happy to toe Washington’s line with regard to the Iranian issue – just ask any Iranian who has tried dealing with Immigration New Zealand (INZ).

Let’s frame this issue in another way: the US doesn’t want mid-range missiles stationed throughout the region to combat Iran. Anyone who thinks they do is, simply put, an imbecile. As Foreign Policy explained, the “choice of Asia for his [Esper’s] first international trip since he was confirmed was a deliberate one, designed to signal that Asia remains the department’s top priority.”

That being said, I don’t need official information requests to determine if my assertions are correct or not, when I can just quote Esper directly.

“Our strategic competitors are China and Russia, principally, in that order,” Esper recently said.

This can be seen in the formal decision by the US to exit the Intermediate-Range Nuclear Forces (INF) Treaty with Russia. While on the face of it, it looks as if the US is directly taking action against Russia (and don’t get me wrong, it totally is doing that as well), the fact remains that the US wants out of this treaty because it was concerned it was limiting its ability to combat China in the Asia-Pacific theater.

This isn’t talked about often, but one needs to only look at the writings of some of the more influential and hawkish think tanks that typically do their utmost to assist US foreign policy in order to see what I am talking about. As stated by Thomas G. Mahnken, president of the Center for Strategic and Budgetary Assessments:

“I experienced the treaty’s [INF Treaty’s] shortcomings firsthand while serving as a deputy assistant secretary of defense under Secretaries Donald Rumsfeld and Robert Gates. Since China was not party to the agreement, it was not required to follow the treaty’s rules. As a result, it was unconstrained in pursuing not only theater nuclear capabilities but also land-based conventional precision strike systems. Today, China possesses up to 2,650 land-based missiles of types that would be banned if it was party to the INF. These weapons, most of which are non-nuclear, pose a threat to US and allied air bases in the Western Pacific as well as US and allied naval forces, principally US aircraft carriers.”

This is also the current strategy of the Trump administration according to Esper himself, who openly referred to China’s missile arsenal while stating that “80 percent plus of their inventory is intermediate range systems, so that shouldn’t surprise them that we would want to have a like capability.”

Thankfully, Australian officials have confirmed that they won’t be allowing Australia to be used as a base to deploy intermediate range conventional missiles. Washington’s desire to detonate and convert the Asia-Pacific region into a warzone puts countries like Australia and New Zealand in uncomfortable positions. Yes, security cooperation with the Pentagon is important and these countries do enjoy hiding under the US nuclear umbrella, but China is also Australia’s largest trading partner.

This sentiment was even confirmed by Australia’s foreign affairs minister, Marise Payne, who said “it’s not in anybody’s interest for the Indo-Pacific to become adversarial in character, so we work closely with our key partners, with our strongest alliance partner, the US, and our key trading partner, China, to pursue those issues of stability and security and prosperity.”

Which is probably why Australia is willing to make some concessions to appease its American counterpart. Not only did it heavily participate in the (illegal) invasion of Iraq, it was involved in bombing Syrian government troops in 2016 (illegally, again), it is also now mulling over the idea of joining the US-led effort to protect Western shipping interests in the Persian Gulf. It’s called the Persian Gulf, but perhaps it needs a name change to reflect America’s ownership of the area.

Just a few days ago, Esper described China’s “destabilizing behaviour” as “disturbing” – which is ironic to say the least, given Esper’s military service in the first Gulf War. He also said that the “US will not stand by idly while any one nation attempts to reshape the region to its favour at the expense of others.” I mean, Esper only really got the job due to his vehemently aggressive stance on any and all things related to China, making him the top-dog to ultimately replace Mad-Dog in Trump’s eyes.

Esper’s arrival in New Zealand also coincides with the Trump administration’s reckless decision to label China a currency manipulator. I call it reckless, not because it is either true or untrue factually speaking, but because the repercussions of this move appear to be far-reaching. Trump also just recently threatened to place another 10 percent tariff on $300 billion in Chinese goods starting from September onwards.

In preparation for Washington’s ambitious vision for this part of the world, headed by Esper himself, China released a defense white paper at the end of July, which heavily criticised what Beijing sees as an American pursuit of “absolute military superiority.”

Furthermore, October will see a fresh round of talks on the second draft of a maritime code of conduct in the South China Sea between China and Southeast Asian countries. These talks are seen as being relatively successful to date, particularly in easing the tensions plaguing the South China Sea, were it not for constant US intervention. Since Trump has been in office, the US has carried out 13 freedom of navigation operations specifically intended to combat China.

While the US would love to see regime change in Iran and is clearly working hard towards that end, the evidence shows that a much more long-term goal is the containment of Beijing, including and especially with regard to China’s rapidly growing presence in the Asia-Pacific region. Even though countries such as New Zealand and Australia rely on a strong trading relationship with China, it will be interesting to see the extent to which they kowtow to US demands in helping to pushback against China’s perceived aims of dominating the region. 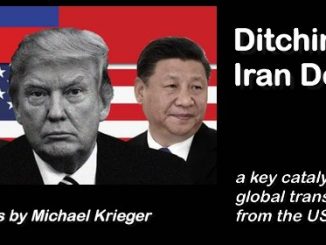