ER Editor: We also recommend the Daily Mail (MSM alert) piece from this months for further information titled British military top brass are ‘a pack of white middle-aged men’ who should be sent for diversity training because the armed forces are rife with sexism, racism and bullying, new report says, and this from the Telegraph (ditto), ‘Middle-aged white chiefs’ a

We’ve done a search for the original report, but only summaries of the original report (the author is pictured left) seem to be available. Here is one from the RAF Families Federation site titled Addressing inappropriate behaviour in the armed forces.

It has long been reported how seriously depleted the British military has become through funding cuts, as well as plans to integrate British defence into a European Defence force irrespective of the delivery of Brexit. Is this just another deliberate nail in the coffin?

The writer of the report, Air Chief Marshall Mike Wigston (pictured above), performed the first same-

sex marriage on an air force base in Cyprus in 2016, having been given command of the RAF in Cyprus. He rose through the ranks from a basic comprehensive school and an engineering degree and didn’t come from one of the Establishment schools. See the Daily Mail article linked to above for his biography. The Telegraph article includes a picture of British Defence Secretary Penny Mordaunt attending no less than a Pride Parade with London Mayor Sadiq Khan this month. (photo credit: Defence Secretary Penny Mordaunt during the Pride in London 2019 parade. July 06, 2019. CREDIT:TRISTAN FEWINGS/GETTY IMAGES EUROPE).

To what lower and more ridiculous levels could the Establishment sink us?

PETER HITCHENS for Mail on Sunday 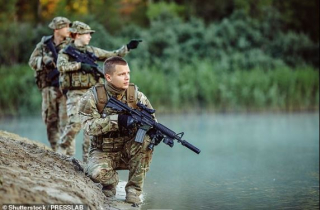 Having wrecked the schools, the police, the courts and the Civil Service, destroyed the married family and debauched the economy, the slow-motion British Revolution now plans to ruin the Armed Forces, the last truly conservative institution left standing after 60 years of upheaval.

At the end of this process, the Army, Navy and Air Force will still exist in outward form, but they will be useless for the purpose for which we have them – fighting the enemy. Instead, they will produce plenty of annual reports showing how sexually equal and inclusive they are.

The appointment of officers will be made on the grounds of subservience to dogma rather than on the grounds of known bravery or competence, and also of course on the basis of sex, with women preferred over men.

If ever such disembowelled, politically corrected forces come up against the fighters of any country which still puts national defence before political fashion, then I do not think there is much doubt of the outcome.

I am amazed there has not been more fuss about the grotesque ‘report’ claiming that the Forces have ‘unacceptable levels of sexism, racism and bullying’ and are led by ‘a pack of white middle-aged men’.

‘Report’ these days is a grand title given to any miserable little pamphlet, light on evidence and long on denunciation, produced by any fool who cares to line himself up with the prevailing ideology.

This ideology hates conservative attitudes towards discipline, courage, self-restraint and freedom of speech. It hates, above all, any expression of the blazing truth that women are different from men.

It entirely accepts the revolutionary beliefs of the #MeToo movement that men are basically not to be trusted in the presence of women. It smears any outbreak of patriotism as ‘racist’.

Well, we’ve heard all this before, notably in the Macpherson Report’s claim that the Metropolitan Police were ‘institutionally racist’, which triggered a 20-year inquisition by fanatics.

No evidence for this supposed ‘institutional racism’ was ever produced, as the few who have actually read the report have found.

But the allegation was enough, and the police forces of this country are now under the leadership of people whose ideas about crime, punishment, right and wrong, might have come out of a Trotskyist pamphlet of the 1970s (I should know. I used to write Trotskyist pamphlets in the 1970s). Which is why they are so bad at what they do.

Now, under a similar thin excuse, it is proposed that all – yes, all – senior officers above the rank of brigadier should be sent on mandatory ‘diversity training courses’. It also calls for the appointment of a ‘culture and behaviour tsar’ to supervise the new regime.

I’ve had some dealings with our Armed Forces. I’d say that their officers and NCOs are about the last bit of our country where – in return for shockingly small rewards – serious responsibility, discipline and skill are still encouraged, and where failure is not tolerated, not out of cruelty or spite but because, in battle, you cannot fail.

Until now, they have just about fought off the modern world. Now it is coming to get them, just as the planet darkens and grows more dangerous. And people ask me why I recommend pessimism.

Is Vladimir Putin the ‘Preeminent Statesman’ of Our Times?