WARNING: The Technology You’re Addicted to Is Harming You & Your Children!

A portion of this introduction to the videos presented below was originally written for the article Smart Meters, Wi-Fi & Cell Phones Can Cause Brain Cancers and is presented here (in red) because of its applicability to the topic.

This is a topic that is massively under reported (except by TLB and other independent media). We will present the known harmful effects of EM (electromagnetic) Radiation to the human body … especially to our much more vulnerable children. What we will show here are facts well known for several decades, yet hidden from us in favor of generating profit for corporate giants.

The government all but refuses to talk about the dangers presented by cell phones, WiFi and other EM Radiation producing mechanisms while quietly (under pressure) admitting that there may in fact be a problem. One recent example shows that the California Department of Public Health had hidden a document drafted many years ago, that contained concerns about cellphone emitted radiation from health officials (see: California Dept. Of Public Health Hid Warning On Cell Phone Radiation For Years).

When the human body (emphasis on the brain and reproductive organs) is exposed to an EM field over extended periods of time, the most probable outcome is likely to be sterility and/or cancer (see: Cell Towers and Cellphones. Microwave Radiation, Electromagnetic Pollution, Impacts on Human Health).

Yet today we are surrounded and totally immersed in an ocean of EM radiation from Cellphone Towers (and 5G rolling out), WiFi, Smartphones, Smart Meters, in our schools, our work environment, our neighborhoods and our homes, etc… and suffer an aware government that does nothing to make the general public aware! Cancer among our children and sterility within the general population are exploding in America today (FACT) … Do you think this is an accident? Do you think our supposed protectors are unaware or ignorant as to why?

Is all this subterfuge perpetrated and perpetuated in the name of profit … or maybe something much more sinister?

Most of our modern schools are equipped with WiFi to enhance the learning process. Presented here is a comprehensive breakdown of how WiFi Electromagnetic Radiation damages the body, and how our children are massively exposed to, and much more susceptible to, this dangerous mechanism …

Today, the proliferation of cell-towers in our communities is exploding, and even that is being exacerbated by 5G implementation. Everywhere you look you see a tower, or see new ones being erected. From the playgrounds of our children’s schools, the stores we frequent, the places we work long hours at, the churches we worship in, to the neighborhoods we live in, you can no longer escape them. Just ask those who service these towers how they have affected their health for answers that will shake you to your core. The $1,000,000 question is, how much do the industry responsible and government know, and how long have they known it? As I have indicated in my opening remarks, the truthful answers are mind bending and incriminating.

So how does EM radiation attack and damage our body, facilitate cancer, sterility, or even breakdown our DNA? Dr. Elizabeth Plourde discusses the damage electromagnetic frequencies can cause in the body, even down to the cellular level.

So what can you do about any of this?

Bringing dangerous issues into the light of day is what we at The liberty Beacon Project do and for obvious reasons, but just telling you what the problems are without offering at least some solutions is basically fear-mongering. So we offer the next two videos.

The next video speaks to the dangers of WiFi, which is also one of the biggest EM sources of exposure in our daily life. Also presented is how how to remediate WiFi Radiation …

What has been presented and linked to here is but the tip of the proverbial iceberg of available information. Again the questions that need to be asked are:

My Parting Shot … Speaking of 5G … Some additional reading on a vital topic!

The Liberty Beacon Project is now expanding at a near exponential rate, and for this we are grateful and excited! But we must also be practical. For 7 years we have not asked for any donations, and have built this project with our own funds as we grew. We are now experiencing ever increasing growing pains due to the large number of websites and projects we represent. So we have just installed donation buttons on our websites and ask that you consider this when you visit them. Nothing is too small. We thank you for all your support and your considerations … TLB 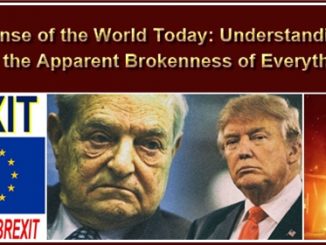 Making Sense of the World Today: Understanding Trump, Brexit and the Apparent Brokenness of Everything