ER Editor: Immigration is indeed returning to the national agenda, indicated by FreeWest Media in their report below, given the shocking murder of several policemen by a radicalised one of their own – Mickael Harpon – just recently. The media is full of debate on whether or not Muslim women should be allowed to wear the veil – but will this change the mass migration agenda? Non. Interior Minister Christophe Castaner, amid this utter mess in the police service and eager to salvage his reputation, recently declared that France had been saved from its own 9/11-style plane attack (filed in: You Couldn’t Make This Up). Ordinary French have large excrement detectors so I doubt if anyone quietly believes this. And France is facing months of labor unrest given Macron’s desire to attack French pensions. The Gilets Jaunes seem to be lying low, relatively speaking.

According to the prefecture of Val-de-Marne, “fifteen young people” ambushed firefighters in Champigny-sur-Marne, this week. The police officers called in reinforcements but they “came under mortar fire”.

Val-de-Marne is a French department located in the Île-de-France region. The department is situated to the southeast of the city of Paris. The “young people” are all migrant youths.

The issue of immigration to France is becoming more and more pressing as facts of this type continue to appear in the media: Must the representatives of the State, firemen, policemen, paramedics and ordinary citizens risk their lives in the “lost territories of the Republic”?

On the night of Monday 21 to Tuesday 22 October, in Champigny-sur-Marne, firefighters and police officers were again assaulted in what could well have been a deliberate “trap”.

Around 2:55, six firefighters were called to a street in the city of Champigny for a garbage can fire when their truck was attacked by fifteen individuals who were “masked and hooded” with projectiles, according to a source from the police union mentioned by French daily Le Figaro.

“It seemed like a trap. The individuals had a real will to light the fires”, said the same source. And the police force had to be called in. The same attackers were ready and waiting with a lot of fire power – three grenades in all.

The daily explained that “three incendiary devices, which could have been mortars used by the attackers, were seized” and added that three minors were arrested after the fact and placed in custody. Thankfully, no injuries were reported among law enforcement or firefighters.

On Wednesday morning in Saint-Raphael, in the Var (ER: a region on the south coast between Marseille and Nice), a migrant was threatening violence at the archaeological museum, according to a police source.

He was carrying a sign with him on which inscriptions in Arabic evoked violent action. According to a police source, he said: “The museum will become a hell.” The translation of his threat was done by the housekeeper.

According to France Bleu, the migrant, a former employee, would not open the front door, and blocked it from the inside.

It is not yet known whether the man, in his twenties, was armed or not, or if he was when he entered the building. The officers of the Nice RAID (ER: the city of Nice), an elite tactical unit of the French National Police, have since been deployed.

Last week, on Thursday, October 17, three passers-by were attacked with a knife in Nîmes (ER: close to the south coast, between Montpellier and Marseille) by a foreigner insulting them as “dirty French”, according to regional daily Midi Libre. The daily published the statements issued by local police.

On Tuesday, October 22, Midi Libre reported that the three people who were stabbed on the previous Thursday, were randomly approached while they were sitting on the terrace, and near a bar in the city. 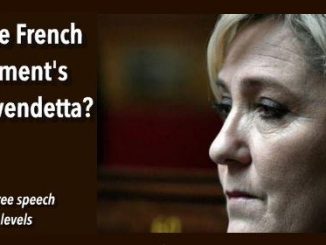