President Trump’s aluminum and steel tariffs have global leaders from the United Nations to former President Barack Obama worried that they threaten the very fabric and structures of the New World Order.
.

On June 24, 2018, New York magazine published an article entitled “Where is Barack Obama?” After gushing over the former president, the article reported how Obama is privately “upset with the [Trump] administration’s actions.” And how “he’s confided to friends that what worries him most is the international order.”

In an article discreetly posted on UNCTAD’s website, entitled “The Costs of Trade War,” Kituyi warns that the Trump’s administration’s “sweeping import tariffs on steel and aluminum raise the real possibility of a global trade war,” adding, “The effects would be felt everywhere, but especially in the world’s poorest countries, and everything from the current global recovery to the Sustainable Development Goals could now be in jeopardy.”

Kituyi’s fears, like those of Obama, underscore the fact that the global trade order established at the end of World War II and many of the so-called free trade schemes since then are really about the redistribution wealth and structures of global governance rather than classical commerce among sovereign nations.

Frightened about a possible “trade war,” Kituyi pleads on behalf of the new world order, contending that globalist trade schemes are “a key factor behind the rise of the global South, where dozens of developing countries have experienced strong economic growth and positive societal change.”

Kituyi credits globalist trade schemes for making possible “one of the most remarkable achievements in human history: lifting one billion people out of poverty.”

How couldn’t the developing nations of the global South economically rise when such trade schemes outsource high-wage Western jobs to cheap low-wage workers in the developing world?

Domestic high wages in the West — inflated by progressive “minimum wages” in the United States and “living wage” laws in Europe coupled with labor union collective bargaining — and the added cost of onerous safety and environmental regulations have made “free trade” deals with impoverished, underdeveloped nations appealing to Western business leaders and CEOs, giving rise to multinational corporations.

In addition to prominent political leaders, CEOs of multinational corporations have long been on the membership roles and participant lists of the Council on Foreign Relations, Trilateral Commission, and Bilderberg Meetings — all globalist groups.

The creation of a New World Order economically facilitated by a global trade order is a joint venture of globalist big government and corporatist big business. Corporations such as Boeing and General Electric are major beneficiaries of this international trade regime.

Boeing has received upwards of 40 percent of the funds discharged by the U.S. Export-Import Bank in the form of taxpayer-subsidized loans for foreign countries to purchase its aircraft.

In FY 2013, Boeing received over $8 billion in ExIm assistance. That same year, GE raked in $2.6 billion from the ExIm Bank.

In 2017, GE announced that it would end most of its manufacturing of train locomotives at a century-old plant in Erie, Pennsylvania — eliminating upwards to 576 jobs — as GE looks to new manufacturing sites overseas in Britain, France, Germany, Hungary, and Communist China.

As we pointed out in a previous article in 2013, CNBC reported: “More than 97 percent of apparel and 98 percent of shoes sold in the U.S. are made overseas,” according to the American Apparel & Footwear Association. During the 1960s, roughly 95 percent of apparel worn in the United States was made domestically.”

Where have all of those textile jobs gone? Perhaps the “Made in China” or “Made in Bangladesh” tag on your shirt will offer a clue.

Kituyi further argues that the international trade order is vital to the success of what is the UN’s largest global wealth redistributive program: sustainable development, i.e., Agenda 21/Agenda 2030.

“Moreover,” Kituyi writes, “a trade war would be a severe blow to the world’s poorest countries, and to the hope of doubling ‘least developed countries’ share of global exports’ by 2020 under the Sustainable Development Goals (SDGs).”

Globalists refer to the world’s job redistribution and wealth redistribution caused by trade schemes as one of the world’s great developments. One of their main talking points is that hundreds of millions of poverty-stricken people around the world have left extreme poverty (living on less than $1.25 per day). Most poverty-reduction in the world has happened in China as it developed with Western infusions of money and expertise. As it says in wikipedia: “Based on household surveys, the poverty rate in China in 1981 was 63% of the population. This rate declined to 10% in 2004, indicating that about 500 million people have climbed out of poverty during this period.” Hence why Obama has fears and why Kituyi writes, “A global trade war might jeopardize the multilateral trading system itself.”

Of course, the global South only stayed poor because growth was stifled by totalitarian leadership. Take China as an example: it has abundant natural resources, yet was a Third World country, while next door to it Hong Kong became one of the wealthier places in the world despite having few natural resources (but it did have economic freedom) and being occupied by Chinese people, as is China. The same was true of North Korea and South Korea.

The globalists choose to overlook such facts as they aim to yoke all peoples of the world under a totalitarian world government and virtually ensure that they will devastate the middle classes around the world, leaving a few rich citizens while the rest eke out an existence — hardly the Shangri La they make it out to be.

While speaking at the UN’s Sustainable Development Summit, on November 2, 2015, UN Secretary-General Ban Ki-moon stressed the importance of the SDGs. “We must use the goals to transform the world,” Ban said of the 17 draconian SDGs adopted as the cornerstone of Agenda 2030.

The UN’s SDGs leave no stone unturned and control virtually every aspect of life from eradicating poverty and hunger, “reducing income equality within and between countries,” tacking climate change by 2030, according to Ban.

A “trade war,” brought upon the world by Trump’s tariffs, according to Kituyi, would undermine all of that. “And it would limit the extent to which trade could be used to advance global goals,” Kituyi revealingly states.

Kituyi’s admission of how trade is “used to advance global goals” is of utmost significance. It drastically underscores that what the UN calls “trade” is really all about “global goals,” as in global wealth redistribution and global governance. There can be no global redistribution, no Agenda 2030, no “sustainable development goals,” no global governance, including eventual world government, without the post-World War II system of managed trade agreements.

The New World Order is nothing without the international trade regime to finance it, and that is what frightens globalist Insiders such as Barack Obama, Mukhisa Kituyi, Ban Ki-moon, and others more than anything else.

Their global trade order leaves no quarter for American sovereignty, independence, prosperity, and economic self-sufficiency during times of war. The anxiety and fears of such globalists further underscore the need for the United States to get out of the United Nations, World Trade Organization, NAFTA, and any and all other entangling alliances falsely presented as “free trade” agreements. 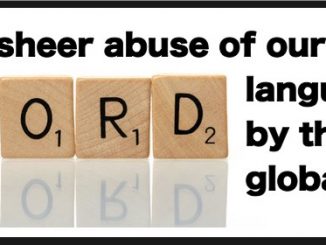 Suddenly The West is Failing to Overthrow “Regimes”