ER Editor: For perspective, we’re doing a two-fer on the ongoing Russian take-down of Ukraine’s power grid by WarNews247 via Front Nieuws, but first, on the Russian fleet experiencing a drone attack in the port of Sebastapol by Moon of Alabama.

Back channel source SGAnon is predicting a major intervention into Ukraine by Russian forces imminently.

This morning at 4:20 local time (Sat. Oct.29) the Russian fleet in the Crimean port of Sevastopol was attacked by nine unmanned aerial vehicles and seven autonomous maritime drones.

Earlier, a maritime drone that had run aground in Crimea and had been found and pictured. 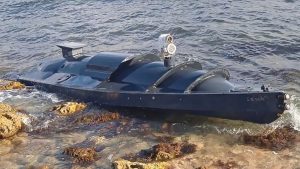 During today’s attack a large U.S. drone had flown in circles south of Crimea. It likely relayed data from and to the drones.

The maritime drones are British, and Russia alleges that British specialists had trained the Ukrainian navy in using them. It also says that British soldiers were involved in the attack on the Nord Stream pipeline.

The Ukrainians published two videos shot by the maritime drones while attacking. One of the videos shows extensive gun fire impacts near the drone from a Russian helicopter that is attacking it.

The Russians say that all the aerial drones and 4 of 7 maritime drones were defeated before they could cause damage. They also say that one mine-seeking ship was damaged in the harbor. It is possible that the damage is greater than Russia admits.

As a consequence of the attack, Russia declared that the deal which allowed for grain exports from Odessa has been suspended. That deal had already been in danger as the ‘west’ had not fulfilled its part of the deal which would have allowed for the export for Russian fertilizer to third parties.

I find it likely that Russia will take additional measures to punish the Ukrainian navy for the brazen attack. Additional attacks on Ukrainian infrastructure is another possibility.

Meanwhile all recent attempts by the Ukrainian army to penetrate the Russian held lines have failed. It is notable that these are now much smaller in size with just a battalion or in some cases just two companies in the lead.

It is now definitely mud season in Ukraine, during which it is impossible to cross most farmland even on feet. This will hinder the attacking forces on both sides until winter sets in.

It is the first video showing a “Swarming” with Iranian Shahed-136 (Geran-2) drones against targets in the Kiev area. The video is shocking. The drones have covered the sky over the Ukrainian capital.

According to some sources, the Russians launched 30 drones from Belarus for this particular attack.

Russia’s ongoing attacks on Ukraine’s energy infrastructure are so methodical and destructive that US officials say they are led by expert electrical engineers who know exactly which targets will cause maximum damage to Ukraine’s grid.

On October 27, Ukrainian military and energy infrastructure facilities were again attacked by Russian missiles and drones.

Late in the evening, the alarm was raised in the regions of Zaporozhie, Vinnytsa, Kiev, Zhitomir, Cherkassy, ​​Dnepropetrovsk and Odessa:

“Emergency situations and extended power outages in Kiev and other regions!”

The state emergency service of the Kiev region has released images of the fire that started after a nighttime bomb attack on an energy facility.

Emergency and extended power cuts have been announced in Kiev and several other regions of Ukraine (Chernihiv, Zhytomyr and Cherkasy) and will continue for at least the next few days.

In Ukraine, it was reported that some critical energy facilities have been shut down as a result of the nighttime attacks.

The power shortage in metropolitan areas is 30%.

Based on this, NPC Ukrenergo has announced that the previous blackout schedules for Kiev and the rest of the regions will be revised. The outage will be unplanned, protracted and will affect more civilians.

The Kiev city government described the restrictions imposed as harsh, lengthy and unprecedented.

Ukraine: Russia has hit the power grid in the country’s central regions

“Equipment in the major network of Ukraine’s energy system in the central regions was damaged,” Ukrenegro said in a statement posted to the Telegram messaging app.

Watch the video of Zaporizhzhya 11:26

Zelensky: More than a third of the country’s energy sector has been destroyed!

Ukrainian President Volodymyr Zelensky has complained that Russian missiles and Iranian-made drones have destroyed more than a third of the country’s energy sector.

Zelensky added that Ukraine has so far received “not a single cent” of the $17 billion in funds earmarked for reconstruction.

“Russia is destroying everything to make it harder for us to get through the winter,” the Ukrainian president said.

Ukraine has lost 90% of its wind energy infrastructure since the war with Russia began on Feb. 24, said Ukraine’s Energy Minister Herman Khalushenko.

He noted that Ukraine is now more dependent than ever on fossil fuels and nuclear power.

The Ukrainian minister did not specify the capacity of the installations, but said Ukraine has significantly expanded its infrastructure for renewable energy production.

This was due to the fact that most green energy installations were located in the south. At the same time, their share in the total energy balance was already quite high – 10-11%.

More than 100,000 citizens are without electricity in Volyn

In the Volyn region, damage to energy installations in Kovel and Lutsk left more than 100,000 citizens without power, while some areas were left without water. Repairs will take several days, said the head of Volyn’s regional military administration, Yuriy Pogulyaiko.

In the morning, Lutsk mayor Igor Polishchuk said the city’s energy infrastructure had been hit in an air raid, part of the city was without power. Citizens were asked to save on water.

“During this day, in the Volyn region, rocket attacks were carried out on energy facilities in Lutsk and Kovel. As a result, 102 thousand citizens across the region were without power. Individual regions and communities where the rocket attacks took place are temporarily without electricity and water,” Pogulayko wrote on his Telegram channel.

He noted that the utilities are making repairs while working on a targeted water supply for residents. Repair crews from Volynoblenergo have started work in the affected areas, using generators and other energy sources. Restoration work continues, he said.

Ukrenergo: The extent of damage is greater than on October 10-12

Ukraine’s national energy company (NEC) Ukrenergo said critical infrastructure facilities have been affected. The extent of damage to the energy system is comparable or even greater than in the early days of the October 10-12 attacks.

“Another missile attack was carried out on the energy supplies of the central networks of the western regions of Ukraine. The extent of the damage is comparable to or could be greater than the consequences of the attack of 10-12 October.

Repair crews from NPC “Ukrenergo” will begin restoration work once the rescue workers from the State Emergency Service have extinguished the fires caused by the rocket attacks.

Specialists from Ukrenergo take all measures to restore the electricity supply in the areas without power as quickly as possible.

Today, too, we are forced to impose restrictions on energy supplies in the regions of Kiev, Chernihiv, Cherkassy, ​​Zhitomir, Sumi, Kharkiv, Poltava, Dnepropetrovsk, Zaporozhye and Kirovohrad,” said Ukrenergo.

Is the Kramatorsk Missile Attack the Second Ukraine False Flag in a Week?

Some Other People’s Thoughts On The U.S. Role In The Ukraine And Europe