ER Editor: Bakhmut and Soledar in the Donbass region are indeed about to fall, as indicated by Moon of Alabama below. On that topic, readers may be interested in the following (browsers will translate) —

This region is curious for its network of underground cities that may be a stronghold for more than what’s being admitted to. See

What is Ukraine Hiding in the Bakhmut Salt Mines?

Russia and Ukraine have publicly agreed on a fundamental and important issue.

The question is who Russia is fighting in Ukraine.

During an interview with a Ukrainian TV station, the Oleksii Reznikov, the defense minister of Ukraine, answered that the Ukraine has “already become a de facto member of the NATO alliance.” 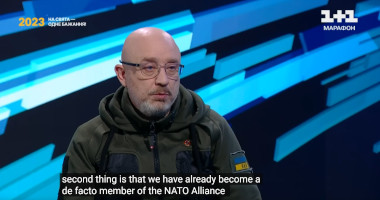 bigger
The interview, given four days ago, is available on Youtube. English language subtitles can be generated by autotranslate. The sentence pictured above comes at about 1:25 minutes in.

Sputnik, which seems to be the only international outlet that has picked up on this, has more (from ~11:05 min):

“At the NATO Summit in Madrid” in June 2022, “it was clearly delineated that over the coming decade, the main threat to the alliance would be the Russian Federation. Today Ukraine is eliminating this threat. We are carrying out NATO’s mission today. They aren’t shedding their blood. We’re shedding ours. That’s why they’re required to supply us with weapons,” Reznikov said …The official said Kiev was being constantly reminded by its “Western partners” that it, “like a real shield, is defending the entire civilized world, the entire West,” from the Russians, and said that he personally has recently received holiday greeting cards and text messages from Western defense ministers to that effect.

Reznikov expressed “absolute” certainty in Ukraine’s eventual entry into NATO, saying he was “convinced that this is an absolutely realistic possibility… Of course they won’t accept this political decision via consensus before our victory. This is clear. But after the victory, after all this ends and some kind of peace arrives, NATO countries, first and foremost, will be interested in the construction of this security architecture. They have seen their own weak spots, they have seen who is strong and powerful. Today they are teaching us but tomorrow our officers, sergeants and even privates will be teaching them how to fight the Russians. Russia remains one of the threats to NATO, and for Europe as a whole.”

Reuters reports today that the Russian government agrees with the core of Reznikov’s view:

Russian Security Council Secretary Nikolai Patrushev is seen by diplomats as one of the major hardline influences on Putin, who has promised victory in Ukraine despite a series of battlefield setbacks.“The events in Ukraine are not a clash between Moscow and Kyiv – this is a military confrontation between Russia and NATO, and above all the United States and Britain,” Patrushev told the Argumenti i Fakti newspaper in an interview.

“The Westerners’ plans are to continue to pull Russia apart, and eventually just erase it from the political map of the world,” Patrushev said.
…
Asked about Patrushev’s remarks, Kremlin spokesman Dmitry Peskov said NATO and the United States were part of the Ukraine conflict.

“De facto they have already become an indirect party to this conflict, pumping Ukraine with weapons, technologies, intelligence information and so on,” Peskov told a regular news briefing.

As both sides now seem to agree on the real participants of the conflict, we can assume that they will later also come to an agreement about its outcome. That however will still take a while.

The heavily fortified Ukrainian strongholds in Bahkmut (Artyomovsk) and Soledar are about to fall. The long fight over these cities has come at a high price particularly for their defenders. All the reserves the Ukrainian command has thrown into them have been ground up by massive Russian artillery applications.

Other reserves the Ukrainian army is still training up are waiting for new supplies of ‘western’ weapons. But what has been newly promised, mostly infantry fighting vehicles (aluminum cans), will only become available in late spring. The most likely plan the Ukrainian command will want to pursue is a move south towards Mariupol (bottom right) to severe the Russian land connection to Crimea. 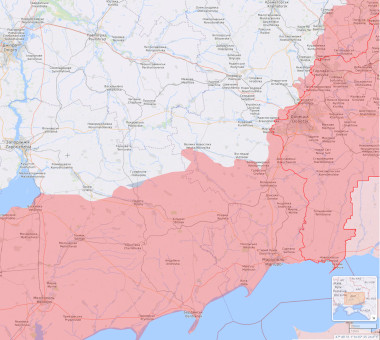 bigger
There is, however, only a small chance that such a move during spring could be successful. Until then Russia has the time to make its own moves.

The West’s Weapons to Ukraine Could Be Turned Against Us