ER Editor: This Daily Mail piece from today is a pretty difficult article to take seriously for many reasons, not least the childishly simple and misleading way they represent the action of vaccines in the body. This comment from the article pretty much sums it all up:

‘The fact remains we may never get a vaccine and, if we do get one, we have to be prepared that it may not be a vaccine which prevents getting the virus, but rather one that reduces symptoms.’

So what do you do when you’re not sure about a product’s efficacy? Why, you buy it and several others like it.

As long as it’s public money you’re using and not your own.

Naturally, there is no consideration of vaccine risks which come with all vaccine types, given that NONE of them are ever properly tested against double-blind placebos.

This chart representing the four types of vaccines being purchased comes courtesy of the excellent team at UK Column: 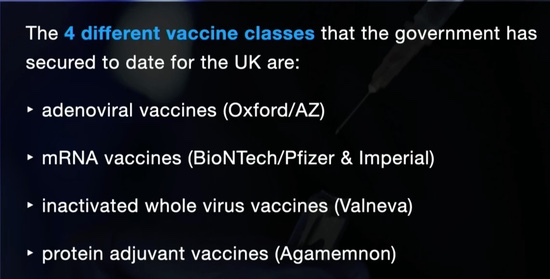 Ministers have today signed a multi-million pound deal with pharmaceutical giants GlaxoSmithKline and Sanofi Pasteur for 60million doses of another potential Covid-19 vaccine.

Number 10 has now secured four different types of experimental coronavirus jabs, giving the UK access to a total of 250million doses — enough to allow everyone in Britain to have four each, if they work.

Scientists have yet to trial GSK/Sanofi’s vaccine on humans, and studies to prove it works won’t begin until September. Other contenders purchased by Number 10 have already shown signs of promise in tests.

The Department for Business, Energy and Industrial Strategy said the jab — bought in a deal rumoured to cost £500million — could be given to high-risk Britons as early as the first half of next year, if it passes trials.

Britain last month began shoring up stocks of experimental jabs all over the world in its spread-betting approach in the hope that at least one of them will pay off.

Health chiefs hope the Oxford University vaccine it has agreed to buy — considered one of the front-runners in the global race to end the pandemic — could even be ready before the end of the year.

Business Secretary Alok Sharma said: ‘Our scientists and researchers are racing to find a safe and effective vaccine at a speed and scale never seen before.

‘While this progress is truly remarkable, the fact remains that there are no guarantees.

‘In the meantime, it is important that we secure early access to a diverse range of promising vaccine candidates, like GSK and Sanofi, to increase our chances of finding one that works so we can protect the public and save lives.’

A vaccine is considered crucial to ending the pandemic, which has so far led to the deaths of almost 660,000 people.

It would be the only way to promise people protection against catching the coronavirus, by triggering an immune response which the body remembers how to strike up again if it is infected with the real virus in future.

But until a jab is proven to be safe and effective, controlling cases relies on social distancing, regular hand washing and wearing face masks.

Governments know this is not a long-term solution to the disease because prevention measures and lockdowns have crippled economies, causing thousands of job losses and sparking warnings of the worst recession in 300 years.

Scientists are racing to find a vaccine that will protect millions, with 25 already being tested in humans and 140 in pre-clinical trials.

The Government’s deal with GSK/Sanofi allegedly costs £500million, The Sunday Times reported earlier this month, which will be paid in stages as the vaccine progresses through clinical trials.

It is not expected to reach phase 3 trials — the last phase of testing before it can be approved for use on humans — until December.

Earlier this month, the Government secured a deal of 30million doses from BioNTech, which is working with Pfizer, and 60million from the French firm Valneva.

It is not clear exactly how much the Department of Health has paid for the vaccines, but it announced in May a £131million fund to develop vaccine-making facilities.

And it has given Valneva — whose vaccine is understood to be in the pre-clinical stages of development — an undisclosed amount of money to expand its factory in Livingston, Scotland.

A further agreement has been signed with AstraZeneca and the University of Oxford for their jab, which is in the phase 3 stage of trials, to produce 100million doses for the UK.

The Government is also working with Imperial College London to speed up their developments. Its jab started human trials in June.

Kate Bingham, chairwoman of the Government’s Vaccines Taskforce, said: ‘This diversity of vaccine types is important because we do not yet know which, if any, of the different types of vaccine will prove to generate a safe and protective response to Covid-19.

‘Whilst this agreement is very good news, we mustn’t be complacent or over-optimistic.

‘The fact remains we may never get a vaccine and, if we do get one, we have to be prepared that it may not be a vaccine which prevents getting the virus, but rather one that reduces symptoms.’

The Government said almost 72,000 people have volunteered in the past week to receive information about joining clinical studies to find a vaccine but many more are needed.

People can sign up for the NHS Covid-19 vaccine research registry. Ministers hope to get 500,000 people signed up by October.

The vaccine produced by GSK and Sanofi, which together have the largest vaccine manufacturing capability in the world, is based on the existing technology used to produce Sanofi’s seasonal flu vaccine.

Genetic material from the surface protein of the SARS-CoV-2 virus is inserted into insect cells — the basis of Sanofi’s influenza product.

The ‘spike’ protein is what the virus uses to bind with cells in the body to invade them and has become the focus of scientific research.

The vaccines aim to prime the body’s immune system to bind to the protein and disable the virus before it takes hold in the body.

An adjuvant — an ingredient added to enhance the immune response — will be added to the vaccine. This part is made by GSK.

An adjuvant can reduce the amount of vaccine protein required per dose, which allows more vaccine doses to be made quicker.

The combination of a protein-based antigen together with an adjuvant is well-established and used in a number of vaccines, including for shingles and hepatitis B.

Roger Connor, president of GSK Vaccines, said: ‘We believe that this adjuvanted vaccine candidate has the potential to play a significant role in overcoming the Covid-19 pandemic, both in the UK and around the world.

‘We thank the UK Government for confirmation of purchasing intent, which supports the significant investment we are already making as a company to scale up development and production of this vaccine.’

‘How Will I Feed My Son?’: Outsourced British Govt Workers Fighting Back Against Poverty Pay