ER Editor: We published this yesterday with a couple of tweeted videos showing larger weaponry likely involved in the attempted take-down of the Kerch Strait bridge. None of which diminishes The Saker’s point, on the contrary. See

Ukraine SitRep – Recent Incidents Of Concern For All Sides

We still have a hunch we’re watching a movie. Nord Stream wasn’t irrevocably damaged, neither was the Kerch Strait bridge. Who has those directed energy weapons to pull this off?

West has now set a course on total terrorist warfare

First, I want to post a video I found on Twitter (original here) which shows what kind of explosion took place on the Crimean bridge.

From what I have read, a truck filled with explosives blew up, killing three people in a car nearby, and then the flames took over a train also crossing the bridge.  That train was full of fuel.  It is only thanks to the amazing speed at which the bridge crews reacted that the damage was limited to only 9 wagons and, therefore, to a much shorter segment of the rail tracks.

Looking at the video, one would imagine that the bridge is in ruins.  In fact, traffic was reestablished on both rail tracks and the road in less than 24 hours (with the exception of heavy trucks).  In other words, this is yet another case of “it is humiliating, but not dangerous” (обидно но не опасно).

But that is an increasingly mistaken notion: this time is also VERY dangerous.

While this is hardly a surprise, the West *always* uses terrorism against sovereign governments, this is still a very negative development for Russia.

Simply put, there are always more targets than cops/guards.

Furthermore, terrorists can always chose the time and location of their attacks.

So far, the Ukronazi efforts in Russia yielded very little tangible benefits: the murder of Dugina made her into a martyr, the attack on NS1/NS2 (ER: Nord Stream) really only hurt Germany and the EU, while the explosion on Crimean Bridge has proven that this is a very hard target which will be extremely hard to destroy short of using a tactical nuke.

Here we all need to remember terrorist attacks on the school in Beslan, the Dubrovka Theater in Moscow, the Budennovsk hospital, the Domodedovo International Airport or the Saint Petersburg subway.  All of them were the result of actions by so-called “terrorist groups” all of which were (and still are) run by western special services.

There are basically only two ways to defeat such state-sponsored terrorist attacks:

Basically, the entire Russian society needs to go on a “mental war footing” and remain calm and very vigilant at the same time: not only is Russia under attack by Banderite Nazis, but also by the folks who did 9/11, MH17 (and many others!) and these are the folks who unleashed an entire terrorist campaign against Iran, which included bombing, assassinations, sabotage, etc.

Then there is the problem of escalation.  The attack on the Crimean Bridge was a clear act of war.

Of course, since no US passports were found conveniently floating in the water, Russia’s response should not be an overt military retaliatory attack.  However, I do expect that something will happen soon, most likely in the Ukraine, but probably involving western personnel / assets / facilities.

In conclusion, I expect things to get even worse right up and until the elections in the USA.  Not that I have much of a hope that sanity would prevail should the GOP win, but “a tiny little” is better than “none at all”.

In the meantime, it is simply shocking for me to observe the collective orgasm felt by the leaders of the West each time some horror befalls Russia.  Truth be told, the fact that they hate us does not surprise me.  What surprises me much more is how unapologetically hate-filled and “in your face” these cries of joy are.   And I wonder …

Do they see that hateful glee in their own eyes when they look in the mirror?  When they see a photo of Daria Dugina, do they feel like the “yeah! scored one against Putin!”?  When the kangaroo court in the Netherlands declares that it was Russia (or the LDNR) blew up MH17, will they feel that justice has been served and the guilty punished?

I am afraid that asking what they see or do not see is the wrong question which, by the way, Putin answered in his recent speech when he said “these European elites understand everything – they do, but they prefer to serve the interests of others“.

It’s not that they don’t see, instead they don’t care.  At all.  They never have.

I will end with a question: is the above only true of the European ruling classes or is that true for most people who live in the EU?

What will the well-intentioned and noble Europeans do when the next bloodbath happens in Russia (because sooner or later it will, such is the nature of the terrorist threat)?  Will they rejoice and wave their Ukie flags a little stronger or will they just not give a damn?

The answer is obvious, especially to Russians. 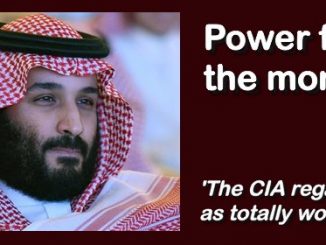