The Strategy of Controlled Chaos

Like a steamroller, the United States and NATO are extending to the world the Rumsfeld/Cebrowski strategy for the destruction of the state structures of countries which are not integrated into the globalised economy. For this, they are using the Europeans, whom they bamboozle with the belief  in an alleged « Russian menace ». By doing so, they are running the risk of provoking a general war.

Everyone against everyone else – this is the media image of chaos which is spreading across the Southern shores of the Mediterranean, from Libya to Syria. It is a situation before which even Washington seems powerless. But in reality, Washington is not the sorcerer’s apprentice, unable to control the forces now in motion. It is the central motor of a strategy – the strategy of chaos – which, by demolishing entire States, is provoking a chain reaction of conflicts which can be used in the manner of the ancient method of “divide and rule”.

Emerging victorious from the Cold War in 1991, the USA self-appointed themselves as “the only State with power, reach, and influence in all dimensions – political, economic and military – which are truly global”, and proposed “prevent[ing] any hostile power from dominating any region – Western Europe, Eastern Asia, the territories of the ex-Soviet Union, and South-Western Asia (the Middle East) – whose resources could be enough to generate a world power”.

Since then, the United States, with NATO under their command, have fragmented or destroyed by war, one by one, the states they considered to represent an obstacle to their plan for world domination – Iraq, Yugoslavia, Afghanistan, Libya, Syria and others – while still others are in their sights (among which are Iran and Venezuela).

In the same strategy came the coup d’État in Ukraine under the direction of the USA and NATO, in order to provoke a new Cold War in Europe intended to isolate Russia and reinforce the influence of the United States in Europe.

While we concentrate politico-media attention on the fighting in Libya, we leave in the shadows the increasingly threatening scenario of NATO’s escalation against Russia. The meeting of the 29 Ministers for Foreign Affairs, convened in Washington on 4 April to celebrate the 70th anniversary of the Alliance, reaffirmed, without any proof, that “Russia violated the FNI (ER: Intermediate-range Nuclear Forces) Treaty by deploying new missiles with a nuclear capacity in Europe”.

One week later, on 11 April, NATO announced that the “update” of the US Aegis “anti-missile defence system” (see featured image), based at Deveselu in Romania, would be implemented this summer, assuring that it would “not add any offensive capacity to the system”.

On the contrary, this system, installed in Romania and Poland, as well as on board ships, is able to launch not only interceptor missiles, but also nuclear missiles. Moscow issued a warning – if the USA were to deploy nuclear missiles in Europe, Russia would deploy – on its own territory – similar missiles pointed at European bases.

Consequently, NATO’s spending for ‘defence’ has skyrocketed – the military budgets of European allies and those of Canada will rise to 100 billion dollars in 2020. 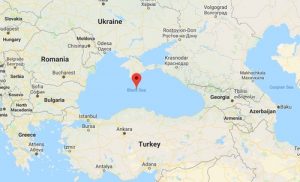 The Ministers for Foreign Affairs, united in Washington on 4 April, agreed in particular to “face up to Russia’s aggressive actions in the Black Sea”, by establishing “new measures of support for our close partners, Georgia and Ukraine”.

The following day, dozens of warships and fighter-bombers from the United States, Canada, Greece, Holland, Turkey, Romania and Bulgaria began a NATO aero-naval war exercise in the Black Sea at the limit of Russian territorial waters, using the ports of Odessa (Ukraine) and Poti (Georgia).

Simultaneously, more than 50 fighter-bombers from the United States, Germany, the United Kingdom, France, and Holland, taking off from a Dutch airbase and refuelling in flight, practised “offensive aerial missions of attack against earth-based or sea-based objectives”. Italian Eurofighter fighter-bombers were once again sent by NATO to patrol the Baltic region to counter the “threat” of Russian warplanes.

The situation is increasingly tense and can explode (or be exploded) at any moment, dragging us down into a chaos much worse that of Libya.

This article was originally published on Il Manifesto. Translated by Pete Kimberley. 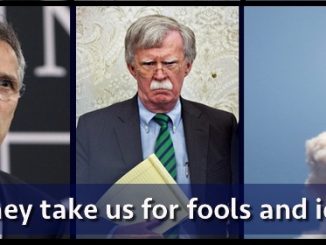 Who Gains from Turning Europe into a Potential Nuclear Battlefield? 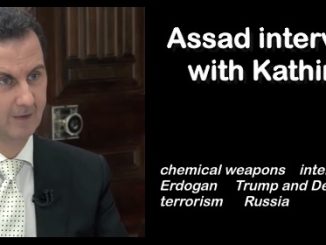