ER Editor: We also recommend this video interview between David Knight of Infowars and Sibel Edmonds, FBI whistleblower, from 2013 which talks about the range of suspicions over the Snowden leaks: among them Edward Snowden’s authenticity, Glenn Greenwald’s involvement with the leaks and the lucrative deals he’s cut, why only 1% of the documents had been released to date, and the MSM’s bizarre response to them. The larger issue Edmonds raises is the status of whistleblowers in the future if these leaks are not genuine and simply stage-managed.

See also How One of America’s Premier Data Monarchs is Funding a Global Information War & Shaping the Media Lanscape.

First Look Media, the parent company of the Intercept, announced it will shut access to the archive of documents leaked by NSA whistleblower Edward Snowden to cut costs as it plans to layoff 4 percent of staff.

The news was met with outrage from high ranking staff member and filmmaker Laura Poitras, who went to Hong Kong to meet Snowden in 2013, just before the first revelations from his trove of National Security Agency documents were published.

She said she was “sickened” by the decision to “eliminate the research team, which has been the beating heart of the newsroom since First Look Media was founded,” and slammed the company for making the decision without consulting her or other board members.

Poitras, Glenn Greenwald and Jeremy Scahill joined First Look Media at its founding, launching the Intercept in 2014 as a place to “aggressively report” on the Snowden documents. The company employed a research team to work on the huge trove of documents provided by Snowden. 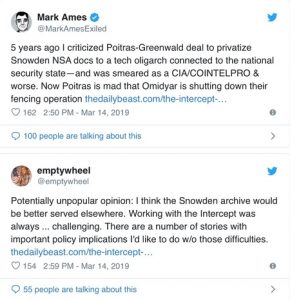 Five years later, it appears that First Look Media owner and Ebay founder Pierre Omidyar no longer wish to hold the trove of documents. CEO Michael Bloom sent an email to staff on Wednesday saying as other media outlets had “ceased reporting on it years ago,” it was going to “focus on other editorial priorities,” the Daily Beast reports.

The vast majority of the contents of the Snowden documents have never been reported on. Snowden chose to give the documents to trusted journalists in the hope they could filter and decide what information to publish, without endangering people. This has been a source of contention for those who feel the entire cache of documents should have been released and published in a searchable format, like WikiLeaks’ releases.

Omidyar has been accused of sweeping in to fund the Snowden publishing in a bid to control what is released. 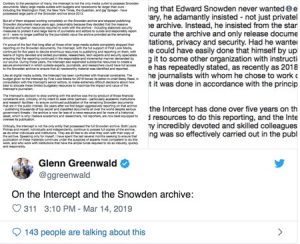 Greenwald said the decision was made because “the budget given to the Intercept by First Look media for 2019 forced editor-in-chief Betsy Reed, in consultation with the Intercept’s senior editors, to make extremely difficult decisions about how best to allocate these limited budgetary resources to maximise the impact and value to the Intercept’s journalism.”

Greenwald said the decision was also a by product of his own “intent to seek other partners – particularly academic institutions and research facilities to ensure continued publication of the remaining Snowden documents that are in the public interest.”

Greenwald received pushback on social media, with users claiming the information belongs in the public. 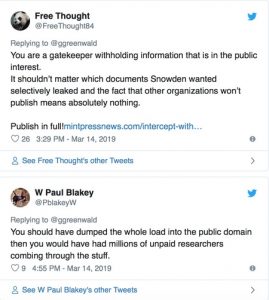 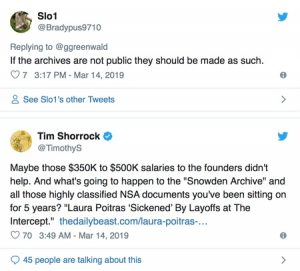 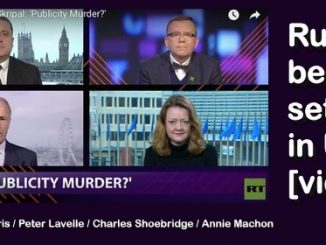