Note that this article below from FreeWest Media only discusses apostasy in reference to Islam. From the website Humanists International (a site whose political affiliations are unknown to us, although this page on their site mentions Soros obliquely) comes this information on the countries where Islamic apostasy is currently punishable by death:

In an article we link to below in reference to Dr. Yusuf al-Qaradawi, who is a prominent member of the Muslim Brotherhood, comes this introduction (our emphasis):

The Muslim Brotherhood is an Islamic mass movement whose worldview is based on the belief that “Islam is the solution” and on the stated aim of establishing a world order (a caliphate) based on Islamic religious law (Shariah) on the ruins of Western liberalism. With extensive support networks in Arab countries and, to a lesser extent, in the West, the movement views the recent events in Egypt as a historic opportunity. It strives to take advantage of the democratic process for gradual, non-violent progress towards the establishment of political dominance and the eventual assumption of power in Egypt and other Middle Eastern countries.

We also recommend this interesting piece from the Irish Times (2006): Conversion issue is one of the most controversial areas of Islamic law.

The powers that be, who have clearly encouraged Muslim immigration as well as other forms for decades, leading us deliberately into multiculturalism, well understand this issue and the impossibility for genuine societal integration it presents.

The dilemma Muslims face with integration

In Germany, “ex-Muslims”, those who have turned their backs on Islam and have tried to integrate have become scared because many Muslims see atheism as a “disease” and consider converts as “defectors”.

Sharia law requires the death penalty in the case of apostasy. “The unity of the Islamic community must be preserved at all costs,” says Laila Mirzo.

“Those who step out of line are traitors and must be punished severely. For since its inception, Islam is at war. In the war against the infidels and in the war with the doubters in their own ranks.” 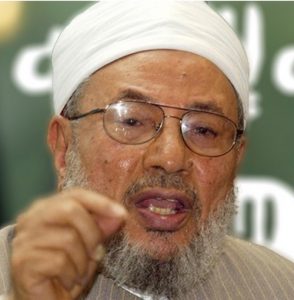 One prominent advocate of the death penalty for apostasy is Sheikh Yusuf al-Qaradawi, who has regularly appeared on Egyptian TV. The preacher studied Islam at Al Azhar University in Cairo, the highest Sunni institution. His word has weight: he is one of the most influential imams in the Arab world.

In an interview in 2013, al-Qaradawi admitted,

Violence and repression are experienced by ex-Muslims in Germany, even within the family.

Mirzo argues that anyone who seriously debates the recognition of Islam as a public enterprise allows for the systematic persecution of all ex-Muslims.

“Because when Islam attains the status of a church, it also gains control over its members. The central organ of the Islamic faith community would gain full access to Muslims’ reported data.”

This is how it is handled in Austria, where since 1912 the so-called “Islam Law” has made Islam a church equivalent to the Catholic and Protestant religious communities. In the constitution of the Islamic Religious Community in Austria (IGGÖ) it is written in summary that for all Muslims who have stated “Islam” in the register of religious confession, membership in the IGGÖ “is suspected”.

(ER: See this BBC piece from 2015 titled Austria passes controversial reforms to 1912 Islam law, in which foreign funding for mosques and imams has been prohibited.)

This is a “declaratory statement”, which can only be actively counteracted by a contradiction.

Therefore, if people no longer feel they belong to Islam, they have to actively resign. If they do, they are publicly pilloried and socially outlawed on social media. The response to their resignation goes from insults to physical violence.

Even murders of ex-Muslims are expected in view of the strengthening of the orthodox wing of Islam in Germany because Islam dropouts are a danger to Islam. Their courage could “infect” others, says Mirzo.

Spain Orders The ‘Biomonitoring’ of Its Population

Former Czech President denounces the direction of the EU

2 Comments on The dilemma Muslims face trying to integrate