A Connecticut court has handed down a 1 billion dollar fine on radio host and independent journalist Alex Jones, for “spreading misinformation” about the 2012 Sandy Hook shooting.

This is a travesty, and that any could call such an absurd penalty “justice” is sickening. Especially when it is so obviously designed as a warning to everyone in the independent media.

Indeed, outside of the specifics of this case, the potential fallout for everyone in the alt-media sphere is terrifying, because already the Jones precedent is being used as an argument for “regulation” of the internet. 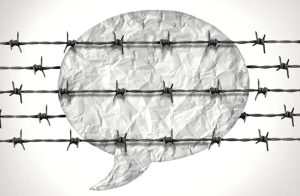 Forget about Sandy Hook. Maybe it happened or maybe it didn’t, experience teaches us that virtually nothing happens exactly as the media reports, but even if it did – even if every single word Alex Jones ever said about Sandy Hook was a deliberate lie – you cannot “regulate” that, you cannot make it a crime, and you cannot silence people’s future for words they have said in the past.

If you take away those rights, you put the power to regulate speech in the hands of those with enough influence to create official “truth” or hold the “right” opinions. And that has nothing to do with objective truth, or real facts.

The media, and the establishment it serves, do not care about truth or facts.

To take a recent example, a Pfizer executive recently reported the pharmaceutical giant never did any research to ascertain if their Covid “vaccine” halted transmission of the “disease” commonly called Covid.

There was never any trial data showing the “vaccines” prevented transmission of “covid”, and that means every outlet, channel or pundit who claimed the vaccine “stopped the spread” was actively “spreading misinformation”.

What’s more, this misinformation has likely led to literally thousands of deaths. That is far more harmful than anything anyone could say about a ten-year-old school shooting, real or not.

Will CNN or The Guardian or the NYT face a billion-dollar fine?

Of course they won’t. Because this is not about “misinformation”, this is about uncontrolled information. It is about regulating – even criminalising – the free flow of ideas and opinions.

Even if this kind of rule were equally applied to all media on every topic, it would be still awful…and we all know it won’t be.

Instead, it will be applied to the independent media, to alternative and anti-establishment voices, and to the internet.

If you doubt that, check the media reaction.

One argument against the need for any new regulation of free speech is that we already have legal systems in place to protect people from “harmful speech” – threats, libel and defamation.

Indeed, Jones’ fate here could be held up as a prime example of “the system working”.

But that is not enough, according to this article on NPR which bemoans the “limits” of de-platforming and defamation suits.

That opinion is shared by this article on NBC, which headlines “Alex Jones’ lawsuit losses are not enough”, and concludes:

Defamation lawsuits are an important tool in the quest to reduce harm from harassment and abuse. But they are not a solution to the lie machines built by incredibly savvy, incredibly cynical pundits like Alex Jones. This week’s verdict, coupled with whatever else happens next, will certainly make conspiracy theorists think twice before they inflict pain on private individuals in the future. But it will not solve the bigger problem, which is our world’s dangerous, pervasive flood of misinformation.

That line about “making conspiracy theorists think twice” is the most honest sentence in the article, and confirms one of the major aims of the Jones trial narrative is to set an example.

But while the point of the article could not be clearer, the author never actually uses the words “regulation”, “legislation” or “censorship”. He chooses to play a more subtle game than that.

The same cannot be said for Simon Jenkins in yesterday’s Guardian, who eschews subtlety completely:

“Proper online regulation”. We all know what that means, it means censorship. He’s not even hiding it in coy language, but openly arguing for a global censorship programme.

He begins by pining for the days when nobody could get a scrap of the public’s attention without going through approved channels:

There have always been Alex Joneses spreading poison from the world’s soap boxes and pavements. As a boy I used to listen to them at Speakers’ Corner in Hyde Park […] Their lies never made it into newspapers or on to the airwaves. Free speech went only as far as the human voice could carry. Beyond that, “news” was mediated behind a wall of editors, censors and regulators, to keep it from gullible and dangerous ears.

Imagine the kind of mind that is nostalgic for an age when “News” – he is right to use quotes – had to pass through a “wall of editors, censors and regulators”. Imagine being able to simply dismiss the multitude of the public as “gullible and dangerous”.

From there he moves on to praise the verdict against Jones, and the state-backed censorship exhibited by the major social media platforms, but laments it does not go far enough, even hinting that people should have their own private websites confiscated:

The main social media outlets have accepted a modicum of responsibility to monitor content […] attempts are made to keep up with a deluge of often biased and mendacious material, but […] by the time it is taken down it re-emerges elsewhere. Jones has been banned by Facebook, Twitter and YouTube, but he can still reach audiences on his own website […] Justice is meaningless without enforcement or prevention.

Next, he tells us who exactly will be in the crosshairs of this suggested global censor. It’s a predictable list:

victims may have the rule of law on their side, but that does not curb the climate deniers, anti-vaxxers, trolls and QAnon followers or the appalling and anonymous abuse that now greets the expression online of any liberal – I might say reasonable – point of view.

Alongside a “no true Scotsman” fallacy altering the definition of free speech:

No one seriously believes free speech is an absolute right.

Like all censors before them, modern censors such as Jenkins seek to codify their desire for control in the language of concern. Proselytizing about the need to “protect people” and “the greater good”. They would, they claim, only censor harmful lies.

Jenkins is aware of this, even as he uses special pleading to argue his version of censorship would be different:

Historians of the news media can chart a progress from early censorship by the church and crown to state licensing and legal regulation. This control was initially employed to enforce conformity, but over the past century it has also sought to sustain diversity and suppress blatant falsity.

The hypocrisy is rank. “Maybe they used to enforce conformity, but of course we would never do that…we just want to silence people who disagree, for society’s sake.”

Of course, none of those who seek to control the speech of their fellow humans ever claim to want to censor the truth. They call it “sedition” or “propaganda”, and claim to be safeguarding “the truth” even as they pull out tongues or break their victims on the rack.

Now they call it “Misinformation”. It’s all the same in the end.

One more time, for the people at the back.

Free speech is not a privilege in the gift of the state, a commodity to be regulated by the government or a child’s toy to be punitively confiscated by grown-ups who know better.

It is a right. For everyone. Everywhere. Always. 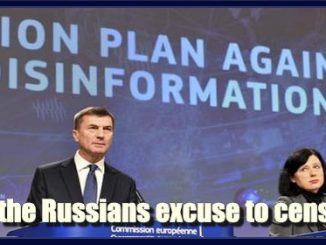 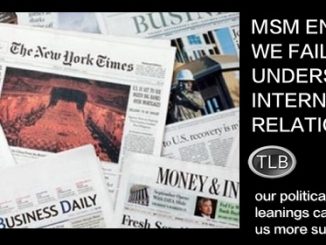 Whom Do You Trust? The Answer Will Reveal Your Politics