Sweden Is Preparing For A “Civil War”: PM Wants To Deploy Army In No-Go Zones

For the first time since World War II, Sweden is preparing to distribute a civil defense brochure to some 4.7 million households, warning them about the onset of war. 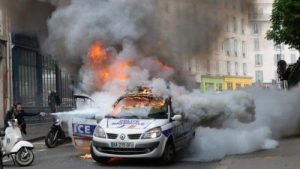 The booklet will serve as a manual of “total defense” in case of a war, and provide details on how to secure basic needs such as water, food, and heating, the FT reported. The manual also covers other threats such as cyber attacks, terrorism, and climate change.

“All of society needs to be prepared for conflict, not just the military. We haven’t been using words such as total defense or high alert for 25-30 years or more. So the knowledge among citizens is very low,” said Christina Andersson, head of the project at the Swedish civil contingencies agency.

The survivalist manual or better known by some as a preppers guide is called “If Crisis or War Comes,” will be published by the government in late spring. Its publication comes at a time when the threat of war from Russia is high, well, possibly, but that is what the mainstream media has conditioned many to believe.

What if the threat is not from Russia, but one that is domestic?

On Wednesday, Prime Minister Stefan Lofven said that Sweden would do whatever it takes, including sending in the army, to end the wave of gang violence situated in the no-go zones around the country. Sweden’s murder rate has been relatively low over the years, but thanks to the migrant crisis, police are powerless in many areas across the country. 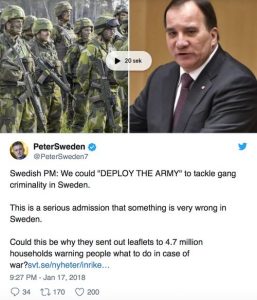 “It’s not my first action to put in a military, but I’m prepared to do what it takes to ensure that the seriously organized crime goes away,” Lofven said after the party leadership discussion in parliament.

“But it is also obvious that there are social problems. Last year 300 shootings occurred, 40 people were killed. The new year has begun with new launches. We see criminals with total lack of respect for human life, it’s a terrible development I’m determined to turn around,” he added.

Even the Swedish Democrat leader Jimmie Akesson “declared war” against organized crime and suggested that Sweden should deploy the military to no-go zones to counter the out of control violence.

“People are shot to death in pizza restaurants, people are killed by hand grenades they find on the street,” Akesson said in parliament on Wednesday.

“This is the new Sweden; the new, exciting dynamic, multicultural paradise that so many here in this assembly … have fought to create for so many years,” he said sarcastically.

Peter Imanuelsen, an independent journalist in Sweden, summed up the recent developments in a timeline: 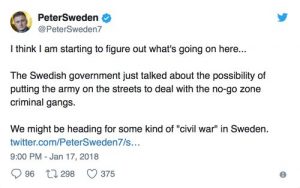 To sum up, the Swedish government is preparing for a destabilizing event while the mainstream media continues to use Russia as the scapegoat. Meanwhile, high ranking government officials in Sweden have echoed in unity that military intervention in dozens of no-go zones across the country is a high probability. At the same time, the government is preparing to hand out millions of survival manuals to their citizens indicating a destabilizing event is nearing. 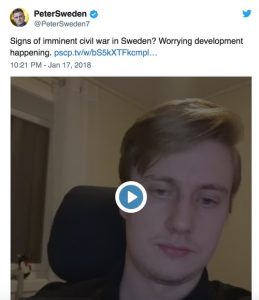 Late on Wednesday we reported of even more chaos in Sweden when a hand grenade was tossed at a police station in Malmo, resulting in a “huge explosion” according to local media reports.

And lastly, while the three biggest political parties in Sweden urge for a military intervention in the no-go zones, the Swedish civil contingencies agency is frantically trying to print millions of survival manuals to protect the citizens for what appears to be a turbulent future in 2018. 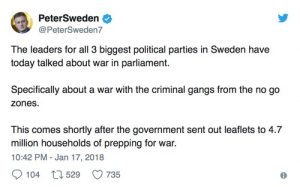