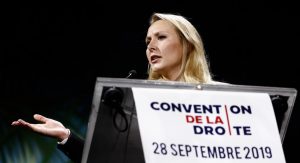 Marion Maréchal (pictured) take place in Paris. One of France’s prominent thinkers and critics of the way France is currently going is Eric Zemmour (pictured below), who dared to defy all standards of progressive, globalist decency when he gave a speech at this Convention, televised live, which included reference to the ‘great replacement’ theory of immigration. Even MSM journalists were calling for suppression of his speech (which frankly isn’t a greatly valued right in France at the best of times). Since then, much has been written on the outrage Zemmour has caused. Likely Attali’s tweet comes in response to this. For an idea of what Zemmour has provoked, see this piece by FreeWest Media titled Eric Zemmour committed a crime of opinion. For those who wish to listen to it, here is Zemmour’s televised speech from his own website.

Jacques Attali’s Message to the Gentiles: “Sovereignism” Is Anti-Semitism & a Jewish-Muslim Alliance Must Shut It Down

Some people seem hell-bent on acting out anti-Semitic stereotypes. If Bernard-Henri Lévy embodies a caricatural warmongering supremacist Zionist, Jacques Attali has become the poster child for the anti-national globalist. The French civic-nationalist and anti-Zionist website Égalité & Réconciliation aptly sums up Attali as

“the French embodiment of social-democratic Zionism, of soft Zionism, or of pro-EU globalist immigrationism, the eulogist of a miscegenated France [une France métisée]. Open to all (southern) winds and to all religions.” Attali recently came to my attention with a perfectly self-explanatory tweet:

“Sovereignism is nothing but the new name of anti-Semitism. Jews and Muslims, who are both threatened by it, must unite against the fantasies of the great replacement.” 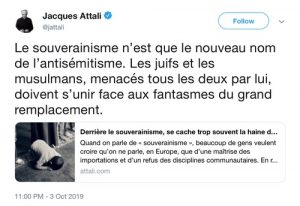 Thus, Attali equates the fight for national and popular sovereignty – a founding principle of the American and French revolutions – with one of the worst evils imaginable: the centuries-old and wholly irrational hatred of the Jews. Gentile sovereignty must therefore be opposed, as should, quite tellingly, any mention of European demographic substitution through mass immigration.

This is remarkable insofar as “sovereignism” (souverainisme) is in fact merely a form of civic nationalism: it wishes to restore the formal sovereignty of the French nation-state. Sovereignists are typically critical of the European Union but often open to “assimilated” Africans and Muslims. Identitarians tend to be critical or indifferent towards sovereignism insofar as it distracts French patriots from the more fundamental and challenging problem: the demographic decline and replacement of indigenous Europeans.

Attali is a Jew born in Algeria. His attack on gentile sovereignty and his call for a Jewish-Muslim alliance of course would be a particularly brazen example of the behavior documented by Professor Kevin MacDonald in his celebrated Culture of Critique series.

Attali’s tweet promotes a recent article of his which in fact is somewhat more nuanced. Instead of a blanket condemnation of sovereignism, the article points out that “often” sovereignism is a mere cover for an

opposition to Muslim and African immigration as such, a form of dog-whistling. This is actually true. Perhaps the tweet is a troll to get attention.

Attali wrote the piece to criticize fellow Jews who have been critical of immigration or defended some form of French identity. These include Éric Zemmour, William Goldnadel, and Alain Finkielkraut (pictured in sequence). Attali writes:

In particular, it is sad to see the descendants of Algerian Jews forget the magnificent role played by Muslim Algerians in supporting and protecting their parents, during the horrible days of triumphant anti-Semitism in France proper and even more so in Algeria, under Vichy, under Giraud, and even under De Gaulle.

We see that even De Gaulle, who staked his entire career on opposing Hitlerism, is thrown under the bus. I am not aware of Muslims having been particularly friendly to the Jews during this period (the Grand Mufti of Jerusalem notoriously supported Hitler, and Bosnian Muslims joined the Waffen-SS). It is true that Vichy’s anti-Semitic legislation was not immediately abrogated upon Giraud and De Gaulle’s taking charge during the Libération.

Attali furthermore argues that if Jews support indigenous Europeans in opposing Afro-Muslim immigration, this “[w]ould be to fall in the trap of those who would like to import in Europe the tragic conflict in the Middle East.” Of course, the simplest and best way to avoid ethno-religious conflict between Arabs/Muslims and other groups in France would simply be to oppose immigration and maintain France’s ethnic homogeneity. The basic insight that ethno-cultural identity is a factor for solidarity and social peace was of course understood by ancient Greek thinkers like Aristotle and by the American Founding Fathers, but this is now considered taboo in the West.

The article is full of the usual tropes: “First of all, this discourse [on immigration] is false. There is no invasion of France by Islam or by Africa.” He points out that annual non-European immigration amounts to “only” 0.5% of the total population. Of course, if such a rate, which has been very roughly in place since the 1960s, were continued for a century, that alone would be enough to reduce the indigenous French population to a minority; not to mention the fact that the first generation of Afro-Muslim immigrants tend to have a much higher birthrate than the natives. Currently, non-whites are estimated to make up a third of births in France, and the country will probably become majority non-white in the 2060s.

Thus, by Attali’s own admission, demographic replacement of native French population is indeed occurring, something without precedent in our history. Even the so-called Barbarian Invasions by the Germanic Tribes during the fall of the Roman Empire do not even come close in scale.

Attali argues that “99% of them [Afro-Muslims] integrate themselves perfectly into the nation.” This is obviously hyperbole. Without getting bogged down into details, many Afro-Muslims (particularly Maghrebis) can be perfectly functional members of society, and the immigrants are, to a great extent, assimilating to a rather shallow modern “French culture,” namely the French language, pop culture 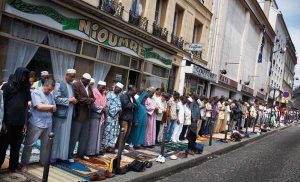 (rap&etc.), and the realities of a social-democratic consumer society. However, there are also significant ethnic ghettos in all major French cities and increasingly even in the villages.

While ethnic realities are to some extent masked by the lack of relevant statistics, the fact is that everyone can observe that stratification and fragmentation of French society along ethnic, racial, and religious lines. This is commented upon by mainstream sociologists and by the top politicians, if only in private. In the best case scenario, the new France black-blanc-beur (black-white-Arab France) so praised by Attali will have ethno-racial realities similar to those of Brazil or, in the worst case, Lebanon.

Attali’s shameless retconning of French history is not even worth rebutting:

Islam is not a threat to France; it has been a component since the eighth century. It is through it, and through Jewish philosophers, that Greek thought arrived in France at the turn of the first millennium. And never has the world been better off than when Judaism, Christianity, and Islam worked together to make reason triumph over obscurantism.

For Attali: “France cannot be summed in an often unbearable past, not an often criticizable history. France cannot be accepted en bloc and venerated as such.” I have never heard Attali express similar criticism of Jewish history and Jewry, though he has written at length on the topic.

Furthermore: “[France] must not fall for the fantasies of the ‘great replacement,’ remember that she carries the name of an invading people, and that she is, from her origin, a foremost place for the settlement of innumerable peoples which every Frenchman, wherever he comes from, is the heir to.” That France was founded by a vigorous Germanic tribe – the Franks, a fellow European people who converted to Christianity and merged with the native French – upon the detritus of the decaying Roman Empire is of course no argument for outright submersion under an Afro-Islamic tide.

Attali ascribes opposition to Afro-Islamic immigration as a sign of a lack of French “self-confidence” and reminiscent of “the anti-Italian, anti-Polish, anti-Armenian, and anti-Semitic ideologies of centuries past.” He concludes with a typical redefinition of terms to suit the needs of the current situation: “Anti-Semitism designates a hostility to both Jews and Muslims.” Attali does not even bother to justify this position (Arabs may be Semites but many Muslims are not, including the black Caribbean convert Mickaël Harpon who recently stabbed four police officers to death in Paris).

The combination of Islam with an Africanized majority population certainly make for a very ‘explosive’ cocktail for France’s future.

Jacques Attali is a leading figure in France’s intellectual-political class, having served as an adviser to 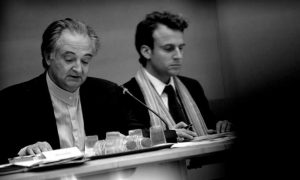 Socialist President François Mitterrand in the 1980s. Since then, he has been involved in various banking initiatives and has constantly argued for France to be open to all financial and migratory movements.

A few of his “greatest hits” over the years:

Attali has never manifested any real opposition or alarm at Jewish ethno-nationalism in the form of Zionism and the daily brutalities of Israeli policy. Like his fellow social democrat Paul Krugman across the Atlantic, he might wistfully lament the ‘inevitable’ tragedy and – with a little verbiage as squid ink – ask his readers to move on to more elevating topics, like how to squash gentile nationalism, open up the West to the Third World, and subject all nations to the rule of the proverbial “small, rootless, international clique.” 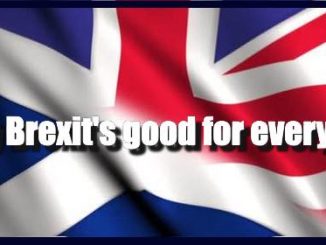 GcMAF: The Genie is Well and Truly Out of the Bottle 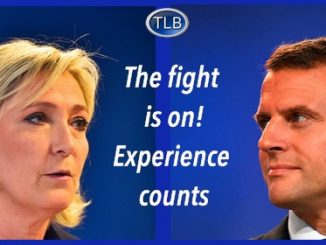