The Reich thus financed the armaments industry by accepting notes issued by the dummy company Metallurgische Forschungsgesellschaft GmbH (hence the name Mefo) rather than paying them in cash. The creation of money was in full swing from 1934 to 1938 – the total amount of notes issued at that time was 12 billion marks. The Reichsbank declared to the German banks that it was prepared to rediscount the Mefo notes, thus enabling the banks to discount them.

Because of their five-year term, the redemption of notes had to begin in 1939 at the latest. This threatened enormous inflation. Since Schacht saw this as a threat to the Reichsmark, he expressed his doubts to the Reich Minister of Finance. But it did not help, and Schacht was quickly replaced by Economics Minister Walther Funk, who declared that the Reich would not redeem the Mefo notes, but would give Reich bonds to the Reichsbank in exchange. At the time of Funk, the autonomous Reichsbank statute was abolished, the Reichsbank was nationalized, and inflation exploded in such a way that Mefo notes with a circulation of 60 billion Reichsmark burdened the budget in post-war Germany.

George Soros is also proposing such a money flurry in the style of Schacht and Funk.1) Soros is dissatisfied with the current EU refugee policy because it is still based on quotas. He calls on the EU heads of state and governments to effectively deal with the migrant crisis through money flooding, which he calls “surge funding”. “This would help to keep the influx of refugees at a level that Europe can absorb.” Can absorb? Soros would be satisfied with the reception of 300,000 to 500,000 migrants per

year. However, he is aware that the costs of his ethnic exchange plan are not financially feasible. In addition to the already enormous costs caused by migrants already in Europe, such a large number of new arrivals would add billions each year. Soros calculates it at 30 billion euros a year, but argues that it would be worth it because “there is a real threat that the refugee crisis could cause the collapse of Europe’s Schengen system of open internal borders among twenty-six European states,” which would cost the EU between 47 and 100 billion euros in GDP losses.

Soros thus sees the financing of migrants and also of non-European countries that primarily receive migrants (which he also advocates) as a win-win relationship. He is calling for the introduction of a new tax for the refugee crisis in the member states, including a financial transaction tax, an increase in VAT and the establishment of refugee funds. Soros knows, however, that such measures would not be accepted in the EU countries, so he is proposing a different solution, which does not require a vote in the sovereign countries. The new EU debt should be made by the EU taking advantage of its largely unused AAA credit status and issuing long-term bonds, which would boost the European economy. The funds could come from the European Stability Mechanism and the EU balance of payments support institution. “Both also have very similar institutional structures, and they

are both backed entirely by the EU budget—and therefore do not require national guarantees or national parliamentary approval.“

In this way, the ESM and the BoPA (Balance of Payments Assistance Facility) would become the new Mefo’s that could issue bills of exchange, perhaps even cheques for Turks, Soros NGOs. Soros calculates that both institutions have a credit capacity of 60 billion, which should only increase as Portugal, Ireland and Greece repay each year the loans they received during the euro crisis. According to Soros, the old debts should be used to finance the new ones in such a way that it officially does not burden the budget in any of the EU Member States. The financial institutions that are to carry out this debt fraud must extend (indeed – cancel) their status, as the leader of the refugees expressed such a wish in his speech.

That Soros is striving to replace the indigenous European population with new arrivals from Africa and Asia is clear to anyone who observes its activities in Europe. The question is: what does he want to do this for, and who is the real ruler behind him, the real leader? 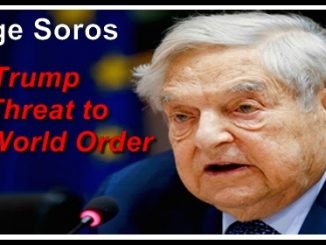 George Soros: The Man Behind the Mayhem [Video] 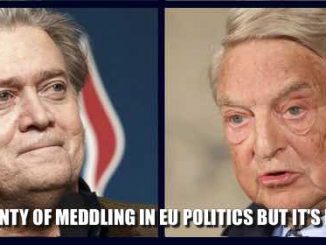 EU Does Nothing to Stop US Meddling in Its Elections