The old quip about fusion is that it’s the energy of the future — and always will be. But this joke may now have to be retired, as scientists have achieved a fusion breakthrough that promises cheap, unlimited, clean energy. Such a development is so staggering that it would represent a seminal point in man’s history.

The breakthrough is the handiwork of Massachusetts Institute of Technology (MIT) scientists working in collaboration with the private company Commonwealth Fusion Systems (CFS). What they’ve achieved is the holy grail of their species of research: effecting a fusion reaction that creates more energy than it uses, something that, up until now, seemed to occupy the realm of unicorns.

Currently, our nuclear technology uses the process of fission, which involves the splitting of radioactive atoms such as uranium. As nuclear-weapon detonations evidence, this produces great energy; however, it also requires radioactive fuel (e.g., uranium, plutonium), which is expensive and limited in supply.

“Fusion, as the name suggests, is the exact opposite of fission,” as Fox News explains. “Instead of ripping atoms apart, extremely plentiful atoms like hydrogen are smashed together, giving off helium and a huge amount of energy.” The benefits are that hydrogen is cheap and practically limitless in supply, and helium is a harmless by-product (we’ll just have to make more party balloons).

Feasible fusion had remained a fantasy, however, because the “process produces net energy only at extreme temperatures of hundreds of millions of degrees Celsius — hotter than the centre of the sun and far too hot for any solid material to withstand,” wrote The Guardian.

“To get around this, scientists use powerful magnetic fields to hold in place the hot plasma — a gaseous soup of subatomic particles — to stop it from coming into contact with any part of the doughnut-shaped chamber,” the news organ continued.

The problem was that powering the large magnets necessary for the process required more energy than the fusion reaction produced, rendering it just an interesting scientific experiment. But the MIT/CFS team has created new magnets, which “are smaller and need less energy,” Fox further informed. “This means that, for the first time, their system produces more energy than it consumes” — perhaps more than twice as much, the scientists estimate.

Speaking of estimates, the most optimistic predictions for when this technology will actually begin powering our energy grid is 15 years from now, though the “just-over-the-horizon timeframe normally cited is 30 years,” relates The Guardian.

Much of this, however, may depend on the funding available. CFS, “a spin-off from MIT — has attracted $50 million from Italian energy giant ENI, and plans to invest $30 million of that sum in research and development at MIT over the next three years,” reports the journal Nature. Robert Mumgaard, chief executive officer at CFS, “says that the collaboration between academics and industrialists should help the team to drive fusion technology out of the lab and into the marketplace,” the site continues. The above is a paltry sum for such a project, but perhaps this breakthrough will spur investment.

As for the technological challenges lying ahead, Nature quotes Mumgaard as saying, “It’s about scale, and it’s about speed.” The journal continues:

The first challenge will be to transform a commercially available superconductor into a large, high-performance electromagnet, which could take around three years. Within the next decade, the team hopes to develop a prototype reactor that can generate more energy than it consumes. Then, they hope to develop a 200-megwatt pilot power plant that can export electricity to the grid.

“We feel very confident in what its performance would be if we can build the magnets at that scale,” says Martin Greenwald, deputy director of MIT’s Plasma Science and Fusion Center.

Unsurprisingly, the project is billed as a way to combat global warming. As Mumgaard put it, “The aspiration is to have a working power plant in time to combat climate change.” This is to be expected whether or not the scientists believe in the anthropogenic-global-warming (AGW) thesis, as it’s difficult to get government funding without conforming to government agendas — in our time, this means tying your work in with climate change. Of course, were the AGW issue taken off the table, one could imagine there being quite a number of very disappointed politicians, activists and “green” millionaires. After all, right now it’s a very convenient vehicle through which to advance statist ideologies and lucrative investments.

Whatever the case, cheap, clean, unlimited energy is to be welcomed. So let’s hope economical fusion lies in the very near future. It would be the closest thing to a perpetual-motion machine we’ve ever had. 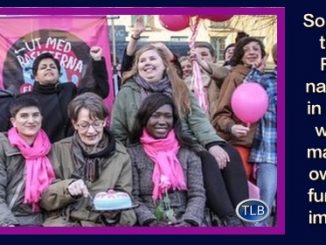 After Inviting Muslims in, Swedish Feminists Find Themselves Pushed Out