On September 13, 2017, more than 180 scientists and doctors sent an 11-page Appeal for a moratorium on the roll out of 5G in the European Union.

The reason for the appeal is that “RF/EMF has been proven to be harmful for humans and the environment,” but 5G has not been investigated fully for potential health hazards and environmental impact by INDEPENDENT scientists other than industry scientists, who apparently would rubber stamp 5G similarly as the other generations of telecommunications updates have been.

According to the Appeal, 5G is effective only over short distances and is transmitted poorly through solid materials.  Because of that inefficiency in transmission, a tremendous number of antennas or cell towers will be needed to implement 5G service.

One key paragraph jumped out for me:

With “the ever more extensive use of wireless technologies,” nobody can avoid being exposed. Because on top of the increased number of 5G-transmitters (even within housing, shops and in hospitals) according to estimates, ”10 to 20 billion connections” (to refrigerators, washing machines, surveillance cameras, self-driving cars and buses, etc.) will be part of the Internet of Things. All these together can cause a substantial increase in the total, long term RF-EMF exposure to all EU citizens.  [CJF emphasis]

Unfortunate as it is, there are no studies of long-term RF/EMF exposure to humans that I know about or have found in my research.  That deliberate omission seems to be the most incriminating aspect of probable collusion on the part of “consensus science,” which apparently motivates and propels microwave technology, the industry and, in particular, its professional associations that impact microwave ‘policy’ at the United Nations, World Health Organization and its IARC, and the U.S. Federal Communication Commission.

“[N]umerous recent scientific publications have shown that EMF affects living organisms at levels well below most international and national guidelines,” including  “increased cancer risk, cellular stress, increase in harmful free radicals, genetic damage, structural and functional changes of the reproductive system, learning and memory deficits, neurological disorders, and negative impacts on general well-being in humans. Damage goes well beyond the human race, as there is growing evidence of harmful effects to both plants and animals.”

The International Agency for Research on Cancer (IARC), the cancer agency of the World Health Organization (WHO), in 2011 concluded that EMFs of frequencies 30 KHz – 300 GHz are possibly carcinogenic to humans (Group 2B). However, new studies like the NTP study mentioned above and several epidemiological investigations, including the latest studies on mobile phone use and brain cancer risks, confirm that RF-EMF radiation is carcinogenic to humans.

The scientists and doctors point out that the Precautionary Principle, adopted by the EU in 2005, states:

When human activities may lead to morally unacceptable harm that is scientifically plausible but uncertain, actions shall be taken to avoid or diminish that harm.

Unfortunately, in this writer’s opinion, the Precautionary Principle has been negated for all intents and purposes by medicine and science in favor of corporate profiteering, “consensus science” and downright falsified or ‘vintage’ research, plus marketing strategies to promote less-than-accurate facts regarding pharmaceuticals, microwave technology and much of the “smart” meme.

Under “Safety Guidelines,” the Appeal emphasizes how industry is protected, but not human health:

The current ICNIRP “safety guidelines” are obsolete. All proofs of harm mentioned above arise although the radiation is below the ICNIRP “safety guidelines”. Therefore new safety standards are necessary. The reason for the misleading guidelines is that “conflict of interest of ICNIRP members due to their relationships with telecommunications or electric companies undermine the impartiality that should govern the regulation of Public Exposure Standards for non-ionizing radiation…To evaluate cancer risks it is necessary to include scientists with competence in medicine, especially oncology.”  [CJF emphasis]

The current ICNIRP/WHO guidelines for EMF are based on the obsolete hypothesis that “The critical effect of RF-EMF exposure relevant to human health and safety is heating of exposed tissue.” However, scientists have proven that many different kinds of illnesses and harms are caused without heating (”non-thermal effect”) at radiation levels well below ICNIRP guidelines.

The problem apparently is that ICNIRP seems to be running the show “science-wise,” while it’s really behind the times, especially since ICNIRP refuses to accept non-thermal waves and adverse effects, which 32 percent of industry-funded-research proved to exist!  Talk about Neanderthals!  What rock has ICNIRP been under all this time?

The Appeal offers five recommendations the European Union ought to follow, especially “to study the total and cumulative exposure affecting EU-citizens.”  Cumulative exposure is KEY to any study whether it is assessing a chemical or a pollutant, which microwave EMFs/RFs truly are.  They create “electrosmog.”

The Appeal has 7 pages of signatories from around the globe, including 23 from the USA.

Let’s hope a similar Appeal is presented to the U.S. Federal Communication Commission, which apparently is totally off-base regarding its safety recommendations. 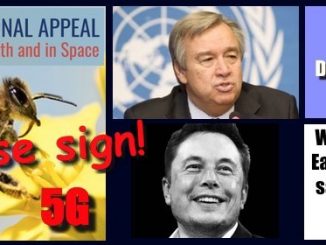 Video: 5G Is A War on Humanity. Towards An Unspoken Global Health Catastrophe? Claire Edwards 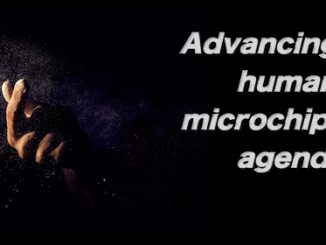 Nanochips and Smart Dust: The Dangerous New Face of the Transhumanist Agenda 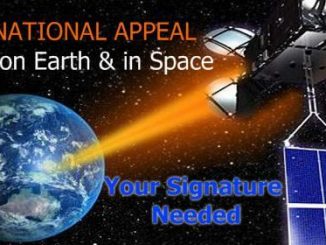 INTERNATIONAL APPEAL: Stop 5G on Earth and in Space