One day after the Italian deputy prime minister and leader of the League party called for the elimination of Italy’s central bank and the country’s financial regulator, Consob, saying the two institutions should be “reduced to zero, more than changing one or two people, reduced to zero”, or in other words eliminated, and that “fraudsters” who inflicted losses on Italian savers should “end up in prison for a long time”, Salvini prompted fresh shocked gasps in Brussels and Frankfurt when he raised the possibility of seizing Italy’s massive gold reserves away from the country’s central bank.

“The gold is the property of the Italian people, not of anyone else,” Salvini said in comments to reporters on Monday, according to the FT. 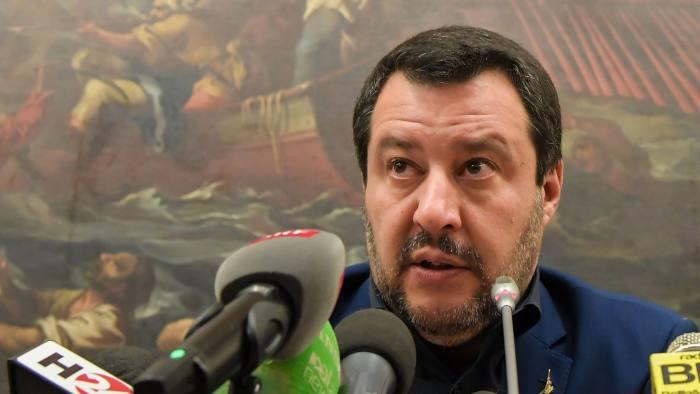 The controversial comments, which were seen as threatening the “independence” of the Italian central bank, whose one-time head was none other than Mario Draghi, prompted Giovanni Tria, Italy’s economy minister, to defend the independence of the central bank.

Earlier in the day, Italy’s populists called on lawmakers to pass legislation stating that its gold holdings belong to the state, Bloomberg reported.

The gold ownership bill presented by euroskeptic lawmaker Claudio Borghi of the League adds to an already tense relationship between the Bank of Italy and the coalition government. It’s also sparked criticism from opposition politicians, and some national media argue that it may allow the government to raid the gold reserves to fund spending promises.

Borghi has rejected the accusation and said he’ll ensure Parliament has ultimate power. His concern is that ambiguity of ownership means that a victorious legal action against the central bank — for inadequate supervision, for example — leaves open the possibility of a claimant getting compensation in gold.

“My bill only aims at making clear that the gold belongs to the state, not to the government,” he said in a telephone interview on Monday. “If there are doubts about our intentions, we can also pass another law saying none of the gold reserves can be sold unless there is a majority of two thirds or more of both houses of Parliament.”

According to Bloomberg, Borghi’s bill, being examined by the Lower House’s Finance Committee, calls for an explicit interpretation of legislation that the institute “holds and manages as deposits” the gold, while the state has ownership.

So why is Salvini seeking to seize the gold and use it “on behalf of the Italian people”? While there was no clear cut answer, the Italian media reported that the coalition government of Salvini’s anti-migration League and the anti-establishment Five Star Movement may be considering using part of the central bank’s gold to fund their spending plans.

Salvini countered that while he had not studied the notion of selling Bank of Italy reserves to fund additional government spending in detail, he conceded that “it may be an interesting idea.”

Meanwhile, the close economic adviser of Salvini and Eurosceptic League member of parliament, Claudio Borghi, has proposed a law to ensure that the Italian state was recognised as the ultimate owner of Italy’s gold reserves rather than the Bank of Italy.

“Nobody wants to sell the ingots, in fact, quite the opposite, we want to prevent others from having their hands on it,” Mr Borghi wrote on Twitter after Mr Salvini’s comments according to the FT.

The idea to liquidate Italy’s gold in order to fund higher state spending appears to have emerged from Beppe Grillo, the co-founder of Five Star, who last September wrote that “It would allow us to finally put an end to this annoying story about the fact that ‘there is no money’”, adding “why do citizens have to sell their necklaces and not the state?”

If Salvini is indeed serious about monetizing its gold, it would bring in a healthy chunk of change for Italy’s populist leadership: the Bank of Italy has the third-largest central bank holding of gold reserves in the world after the US and Germany, owning 2,452 tonnes according to the World Gold Council, which at today’s prices would amount to just over $103 billion.

Of course, even that amount pales in comparison with Italy’s total debt load of €2.35 trillion, which would suggest that if Salvini is indeed focused on tearing up the legacy constraints of his country with some financial establishment, the next step would be declaring the country’s sovereign debt “odious” or null and void, followed ultimately by the Italeave, and the return of the Italian lira.

Not Even The Soviet Union Paid People To Stay Home

Semper Sigh: Biden’s Use Of The Marines Violated Long-Standing Federal Policies And Regulations