On October 1st, Russia’s Tass news agency reported that the Director of the Russian Foreign Intelligence Service Sergei Naryshkin condemned the European Parliament for having blamed Stalin along with Hitler as having started World War II. He said, “The recent resolution adopted by the European Parliament that assigned the historic blame for the outbreak of the Second World War on the Soviet Union is nothing but a product of the cynical, immoral and even sleazy political put-up job.”
.
Naryshkin was referring to the September 19th vote in the European Parliament, by 535 votes in favor, 66 against and 52 abstentions, approving a document which stated that “The European Parliament … Stresses that the Second World War, the most devastating war in Europe’s history, was started as an immediate result of the notorious Nazi-Soviet Treaty on Non-Aggression of 23 August 1939, also known as the Molotov-Ribbentrop Pact, and its secret protocols, whereby two totalitarian regimes that shared the goal of world conquest divided Europe into two zones of influence.”
.
The historical reality of the matter is as follows, as I reported in fuller historical context on October 1st:
———
On 18 October 2008, Britain’s Telegraph  bannered “Stalin ‘planned to send a million troops to stop Hitler if Britain and France agreed pact’” and buried the core revelation, that Stalin prior to the 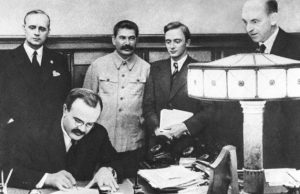 Ribbentrop-Molotov Pact recognized Hitler’s determination to conquer the Soviet Union and he had, on 15 August 1939, urged Neville Chamberlin* to accept the U.S.S.R. as an ally in their mutual war to defeat Hitler; but Chamberlin refused, and so Stalin reached out to Hitler for an agreement with him to a dividing-line between those two countries’ (Germany’s and U.S.S.R.’s) essential areas of control for each one’s national security. Poland especially was a worry to both of them because Poland had had territorial conflicts with both Germany and the Soviet Union. Thus was signed on 23 August 1939 the Ribbentrop-Molotov Pact, which split Poland between both countries.
.
The Versalles Treaty at the end of WW I had handed to Poland what had been German territory that through most of prior history had been Polish territory. Hitler was elected into power in 1933 vowing to abandon that Treaty and to restore, to German rule, that part of Poland.
.
As regards Poland’s conflicts with Russia: Poland had invaded Moscow during 1605-18, before Russia responded by both military and diplomatic means to virtually conquer Poland into becoming a colony of Russia, which it remained almost uninterruptedly until 1939, when the Hitler-Stalin agreement — the Ribbentrop-Molotov Pact — restored part of Poland to the Soviet Union, but handed the other part of Poland to Germany.
.
Stalin, having been spurned by Chamberlin (who held his own imperialistic intentions — he was as imperialistic as were the fascists: Hitler, Hirohito, and Mussolini), had actually no other option in 1939 than to reach a peace-agreement with Hitler so as to avoid having the Soviet Union become swallowed up by the capitalist countries — first by Germany, and then by whatever countries would finally win the coming World War (presumably, likewise Germany).
———
Consequently, the European Parliament voted on September 19th, by 535 to 66, for a lie, that the blame for the war in Europe was shared equally between both Stalin and Hitler, when, in fact, Stalin had tried to ally with Chamberlin in order to go to war together against Hitler, which would have — if Chamberlin had said yes — promptly been announced and could thereby have prevented, or at least postponed, Hitler’s invasion. If Chamberlin had said yes, then, of course, there wouldn’t have been any joint invasion of Poland by both Germany and the Soviet Union, but, to the contrary, there would have been, instead, a joint warning by both the British empire and the Soviet Union saying that if Hitler invaded any country, it would start a war by the allies — England and the Soviet Union — against Nazi Germany. The invasion of Poland might even have been prevented.
.
The European Union’s September 19th Resolution also condemned today’s Russia in the following ways:

“Whereas although the crimes of the Nazi regime were evaluated and punished by means of the Nuremberg trials, there is still an urgent need to raise awareness, carry out moral assessments and conduct legal inquiries into the crimes of Stalinism and other dictatorships”
“Whereas despite the fact that on 24 December 1989 the Congress of People’s Deputies of the USSR condemned the signing of the Molotov-Ribbentrop Pact, in addition to other agreements made with Nazi Germany, the Russian authorities denied responsibility for this agreement and its consequences in August 2019 and are currently promoting the view that Poland, the Baltic States and the West are the true instigators of WWII”
“Calls on all Member States to commemorate 23 August as the European Day of Remembrance for the victims of totalitarian regimes at both EU and national level, and to raise the younger generation’s awareness of these issues by including the history and analysis of the consequences of totalitarian regimes in the curricula and textbooks of all schools in the EU”

“Points out that in the light of their accession to the EU and NATO, the countries of Eastern and Central European have not only returned to the European family of free democratic countries, but also demonstrated success, with the EU’s assistance”
“Expresses concern at the continued use of symbols of totalitarian regimes in the public sphere and for commercial purposes, and recalls that a number of European countries have banned the use of both Nazi and communist symbols”
“Maintains that Russia remains the greatest victim of communist totalitarianism and that its development into a democratic state will be impeded as long as the government, the political elite and political propaganda continue to whitewash communist crimes and glorify the Soviet totalitarian regime; calls, therefore, on Russian society to come to terms with its tragic past.”

.
The presumption there is that today’s Russia has not condemned Stalin and his crimes against the Soviet peoples, as well as the invasion of Poland, and that today’s Russia is totalitarian instead of a democracy (at least as much of a democracy as the EU itself is). It’s a call for — if not outright war against Russia — it’s a call for worsening relations between Russia and the rest of Europe. How contemptible.
.
As my article on October 1st documented: without the Soviet Union’s help, Hitler would probably have won WW II. Some thanks it is that today’s Russians (the nation that suffered the largest number of casualties and other losses from Hitler’s invasion of it) receive from the EU nations that they had saved from being controlled today by the Nazis. How contemptible can the EU possibly be, by 535 votes in favor, 66 against?
.
I ask this question as an American historian who enormously admires our President Franklin Delano Roosevelt’s decisions throughout the war (except for the internments of Japanese-Americans). I think that he would despise what the EU has become. I certainly do. I share the contempt of today’s EU that was expressed by Mr. Naryshkin.
.
* In that October 1st Article, under deadline-pressure, I automatically said there “Churchill,” but, of course, he wasn’t yet Britain’s Prime Minister: Neville Chamberlin was. There were no other errors in the article, so far as I am aware.
.
———————————————
Investigative historian Eric Zuesse is the author, most recently, of  They’re Not Even Close: The Democratic vs. Republican Economic Records, 1910-2010, and of  CHRIST’S VENTRILOQUISTS: The Event that Created Christianity. 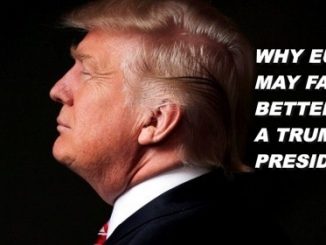 Why Trump’s Presidency Is a Win for Europeans