The Role of Neoliberalism in Spain’s Constitutional Crisis

With Catalonian President Carles Puigdemont stepping back from the brink in the midst of rising tensions in Spain over the region’s bid for independence, signing a declaration of independence but deciding to suspend its implementation, millions will have breathed a collective sigh of relief given the prospect of a severe response from Madrid.

Though tensions may have ratcheted down — at least temporarily — the underlying issue fueling this crisis, along with the various other crises that have been and are still unfolding around the world, has by no means been resolved. That issue is neoliberalism.

When Karl Marx wrote in his Communist Manifesto that modern “bourgeois society is the sorcerer who is no longer able to control the powers of the nether world whom he has called up by his spells,” he could have been describing today’s crisis within neoliberalism, one that evinces no sign of abating anytime soon.

In fact, far from abating it is a crisis that has merely been intensified by the actions of the economic elites and various governments which rule in their interests throughout the West and wherever Western liberal democratic ideas predominate. The current and escalating crisis engulfing Spain over Catalan independence is a case in point.

Having attended the mass opposition march and rally to Catalan independence in Barcelona on October 8, I was struck by the fact that were it not for this enveloping crisis of neoliberalism — involving the introduction of draconian austerity by the Spanish government in Madrid over the past few years — the eruption of separatist movements, growth of nationalism, xenophobia as the new normal within the political mainstream, would likely not be happening. 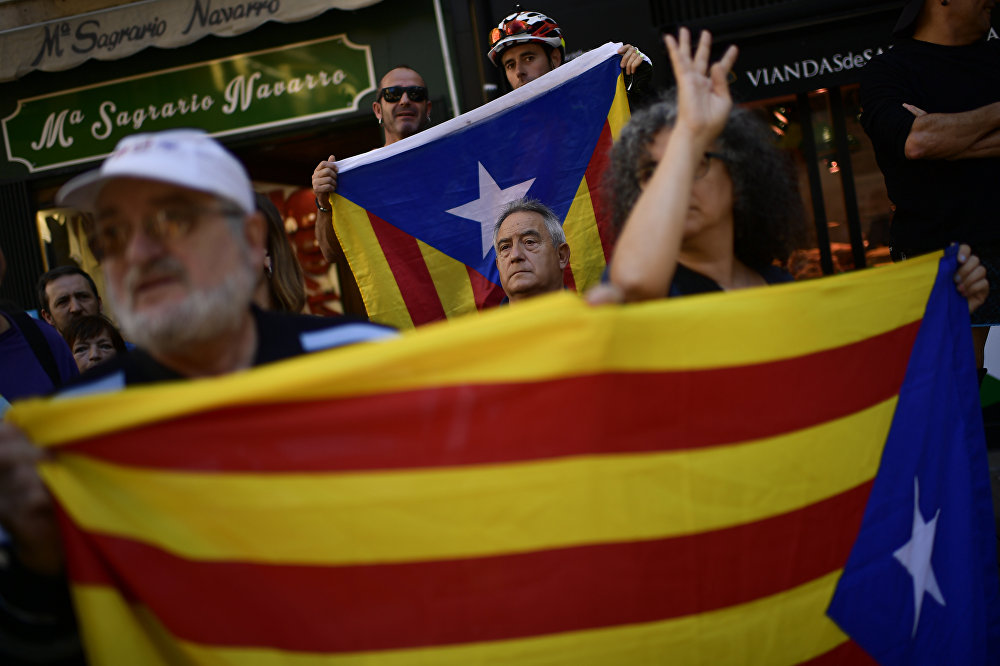 © AP PHOTO/ ALVARO BARRIENTOS
Pro independence trade union worker holds up ”esteleda” or Catalan pro independence flags, in support of the Catalonia’s secession referendum, and against alleged brutality by police during a referendum on the region’s secession from Spain that left hundreds of people injured, in Pamplona, northern Spain

The fact it is happening is an indictment of the aforementioned economic elites and their political bag carriers, evidence that not only have they failed to learn the lessons of this monstrosity of an economic system — one that sits as a tyrant over the lives of the vast majority living under it, rather than serve their needs — but that their only response to global economic recession that erupted in 2008 due to the contradictions and irrationality embedded within it, has been to impose more neoliberalism in the form of draconian austerity programs. The result has been a deepening of the very crisis they have asserted that austerity would overcome.

In the case of Catalan separatism, it is no coincidence that this crisis has arrived on the back of the swingeing cuts in public spending introduced by Madrid in 2010, responsible for pushing millions of people across the country, including Catalonia, into poverty and unemployment. Add the ingredients of cultural nationalism, national identity, and in the case of Spain unresolved issues surrounding the civil war and General Franco’s dictatorship, and you have yourself a perfect storm.

The situation is similar when it comes to the emergence of the movement for Scottish independence from the UK in recent years. Then we have Brexit, the spread and growth in support for nationalist and anti-EU parties across Europe, the election of Trump in the US, and going further back, the 2011 Arab Spring, prior to its transmogrification into an Arab Winter of Salafi-jihadism — all of them are symptoms of the same crisis of neoliberalism.

Fundamentally, this is an economic system and doctrine that can only ever exist in a state of conflict with national sovereignty, identity, and cultural pluralism. It is a one-size fits all economic system which carries with it a particular set of liberal values that are no respecter of borders, cultures or specific national identities, diminishing the ability of states to take economic measures in the interests of their own people rather than the multinational banks and corporations that in truth are in command.

The instability and wreckage wrought in the name of this economic system, and its accompanying liberal values, have not only fueled separatist and nationalist movements in the West, they have also been a major factor in the neo-imperialist assault unleashed by Washington and its allies beginning from the demise of the Soviet Union in the early 1990s.

As Perry Anderson writes of this world-historical event and its implications:

“Communism was dead, but capitalism had not yet found its accomplished form, as a planetary universal under a singular hegemon. The free market was not yet worldwide… In the hierarchy of states, nations did not always know their place.”

The Russian people felt the whip hand of neoliberal economics during the 1990s, the same decade that saw the destruction of Yugoslavia, followed the next decade by the destruction of Iraq as Washington reached to assert full spectrum dominance, using the atrocity of 9/11 as a pretext. Afghanistan, Libya, the conflict in Syria, sanctions on Cuba, North Korea — what each of the aforementioned states has had or has in common, regardless of their specific characteristics, is that they refused to be dominated by the neoliberal Washington consensus.

Understanding the nature of this monster requires that we resist the easy option of treating all of the various conflicts and crises around the world in isolation. They are not isolated, they are inextricably linked — linked to an economic system that is without a shadow of any doubt the common enemy of humanity in our time. 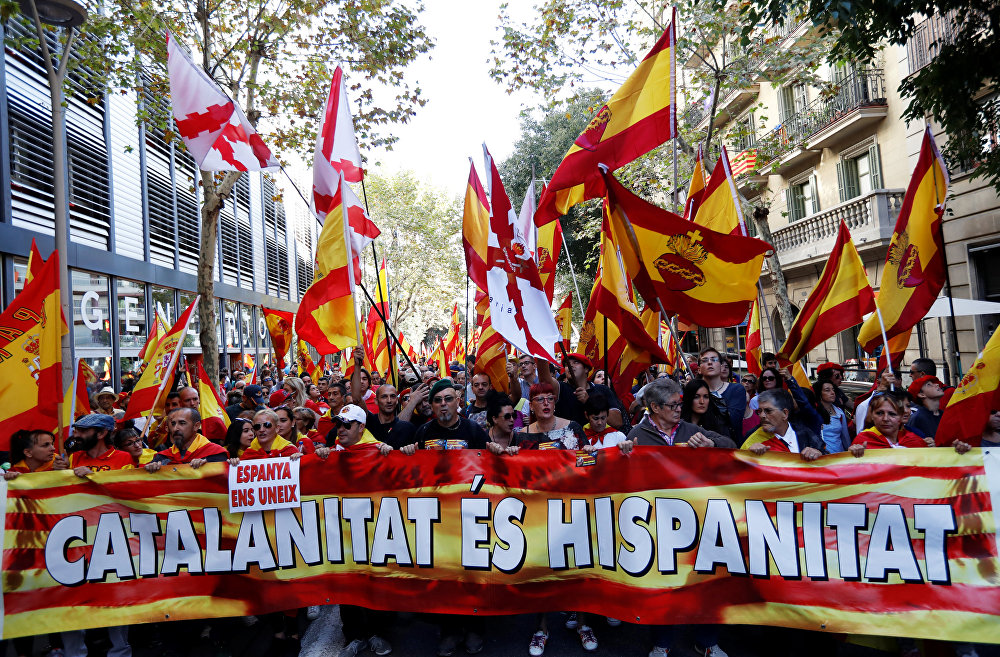 © REUTERS/ GONZALO FUENTES
People walk behind a banner during a pro-union demonstration organised by the Catalan Civil Society organisation in Barcelona, Spain October 8, 2017

Whatever happens in Catalonia, the needs of the region’s people will not be met by merely changing the national flag flying over the municipal buildings. You can’t eat a flag — a flag does not put food on the table, heat a home, or educate children. This necessitates the assertion of not only political sovereignty but also economic sovereignty.

Irish rebel leader James Connolly, executed by the British for his part in the Easter Rising in Dublin of 1916, prior to leading his men out to fight and die for Ireland’s national liberation, left no doubt of the folly in believing that independence in itself would be enough:

“If you remove the English army tomorrow and hoist the green flag over Dublin Castle, unless you set about the organization of the Socialist Republic your efforts would be in vain. England would still rule you. She would rule you through her capitalists, through her landlords, through her financiers, through the whole array of commercial and individualist institutions she has planted in this country and watered with the tears of our mothers and the blood of our martyrs.”

The people of Catalonia should take note.

The Suicide of France 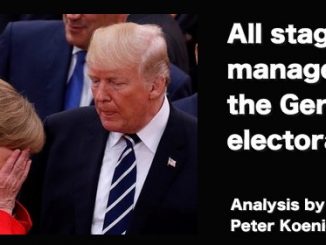 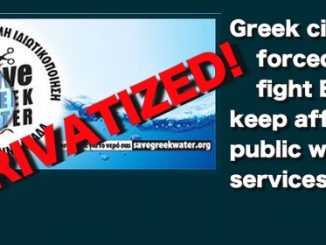