Six US Republican senators have asked the State Department to review US aid to NGOs run by billionaire George Soros, citing Macedonia and Albania as the most recent worrying examples of conflict-sowing interventionist policies in the Balkans.

In a letter sent to Secretary of State Rex Tillerson this week, the lawmakers express concern over reports that US foreign aid has been channeled to support “left-leaning parties” and the “progressive agenda”, with reports of similar US interventions in Africa and Latin America as well, according to the senators.

Senator Mike Lee (R-UT) leading a group of like-minded colleagues are calling on Tillerson to step in and investigate how US taxpayer funds are being disbursed via the State Department and the United States Agency for International Development (USAID) to support Soros-backed, leftist agitator groups in several Eastern European countries including Macedonia and Albania. 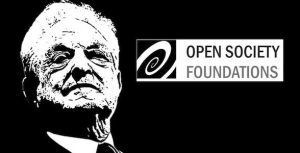 Potentially millions of US taxpayer dollars land with Soros’ Open Society Foundations, in order to fund left-leaning agitators, including the Platform for Citizens Oriented Politics, Journalists for Human Rights, and an LGBT Support Center, all of which go towards promoting civil unrest.

Senator Lee told Fox News that foreign officials and political leaders have also come to him with “reports of US activity in their respective countries”.

Other Republican signatories of the letter to Tillerson include James Inhofe of Oklahoma, Thom Tillis of North Carolina, David Perdue of Georgia, Ted Cruz of Texas, and Bill Cassidy of Louisiana, urging the Secretary of State to investigate allegations that the Obama administration funneled taxpayer money to fund the Soros agenda.

“Unfortunately, we have received a credible report that, over the past few years, the US Mission there has actively intervened in the party politics of Macedonia, as well as in the shaping of its media environment and civil society, often favoring left-leaning political group over others. We find these reports discoraging and, if true, highly problematic.”

“Much of the concerning activity in Macedonia has been perpetuated through USAID funds awarded to implementing entities such as George Soros’ Open Society Foundations. As the recipient of multiple grant awards and serving as a USAID contractor implementing projects in this small nation of 2.1 million people, our taxpayer funded foreign aid goes far, allowing Foundation Open Society – Macedonia (FOSM) to push a progressive agenda and invigorate the political left. Our foreign aid should only be used to promote a political agenda if it is in the security or economic interests of our country to do so, and even at that, we must be cautious and respectful in such an endeavor. We should be especially wary of promoting policies that remain controversial even in our own country and that have the potential to harm our relationship with the citizens of recipient countries.”

Senator Lee said in a statement: “This includes reports of diplomats playing political favorites, USAID funds supporting extreme and sometimes violent political activists, and the US Government working to marginalize the moderates and conservatives in leadership roles. … This sort of political favoritism from our missions around the world is unacceptable.” 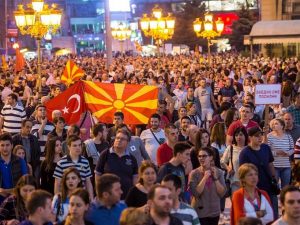 Protestors took to the streets across Macedonia in the so-called “Colorful Revolution” (pictured) – a protest similar to those organised with Neoconservative-backing in former Soviet nations, including the Rose Revolution in Georgia, the Orange Revolution in Ukraine, and the Tulip Revolution in Kyrgyzstan.

“As many as 61 left-wing groups in Macedonia, affiliated with Soros’s Open Society Institute, received millions of dollars from the US Agency for International Development and the State Department during Barack Obama’s administration,” Fox News reported.

While Soros’ involvement risks plunging Macedonia into civil war, it also risks fomenting another proxy war between Russia and the United States, similar to what is currently happening in Ukraine.

He stressed that heightening inter-ethnic tensions in Macedonia would be dangerous not only for the state but could ignite the whole region. 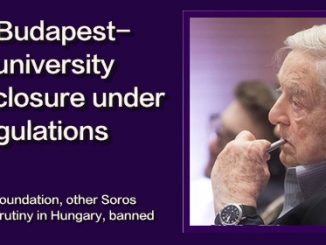 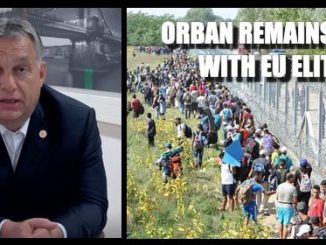 Hungary refusing to back down faced with revenge from EU elites