When there was news that Trump would meet on the sidelines of the U.N. General Assembly with Iran’s President Rouhani in a few weeks, there were sighs of relief.

When Benjamin Netanyahu goes to Moscow to get Vladimir Putin’s blessing to continue airstrikes in Syria and was told no, the world said, “Finally! Enough is enough.”

The problem is that there were also very powerful people who were not happy about these things.

Moreover, there are a lot of nervous people out there worried that Tuesday’s election in Israel (ER: yesterday, September 17) will not go the way they want it.

A lot of people have invested a lot of time and money in ensuring Netanyahu stays in power. And I don’t just mean Bibi himself, who will likely go to jail on corruption charges if he doesn’t win.

I mean a lot of people in the U.S., Saudi Arabia, the U.K. and in Europe, all of the places where anti-Russian, anti-Iranian and pro-Israeli sentiments abound.

And this brings up the main question I always have in the wake of one of these major escalations of tensions with the country currently catching the Twin Eyes of Sauron in D.C. and Tel Aviv.

Why do they always seem to occur right after moments of de-escalation and there’s the threat of peace breaking out somewhere?

Why is it that every time President Trump tries to push the U.S. and the world away from war, within a few days there’s an incident which pushes us right back to the brink of it?

Trump visits Kim Jong-un in North Korea, making history, there are attacks on UAE oil tankers. Trump refuses to attack Iran over them shooting down a Global Hawk drone in Iranian airspace escorted by a fully-crewed Poseidon P-8.

Go back to President Trump’s first, and biggest, geopolitical blunder in April 2017. The Syrian Army wins a major battle and is on the verge of victory, and a chemical weapons attack happens deep in Al-Qaeda controlled territory blamed on the SAA.

Trump then launches 57 tomahawks at the Al-Shairat airbase.

Trump declares we’re pulling out of Syria, Israel openly bombs targets deep in Syria. His staff, including John Bolton, freak out and walk it back.

The Houthis send a couple of drones at an Aramco facility far beyond their known capabilities and the UAE pulls out of the Saudi coalition in Yemen.

Moscow has had its fill of Netanyahu. He’s (ER: Putin) openly mocking Trump at international forums, first offering to sell the U.S. Russia’s hypersonic missiles at the G-20 and then offering to sell S-400 missile defense systems to the Saudis to protect their people from outside actors.

All with tongue firmly implanted in cheek, but like with all good comedy, a core of undeniable truth.

Things look bad for the alliance between the U.S., Israel and Saudi Arabia, when your opponents are laughing at you openly. In that moment Putin exposed that the emperor truly was standing naked in front of the world.

And yet, after all of these coincidences I’m supposed to believe, without evidence again, that Iran would jeopardize its future at the very moment when everything is beginning to break their way and the U.S. maximum pressure campaign is failing?

The very fact that we have been shown zero proof of what happened more than 48 hours after the event, which has every neocon in the U.S. clamoring for war, is your biggest tell that there is something very off about this incident.

Even President Trump doesn’t believe this as he is taking the same tack rhetorically now that he did after the U.S. Global Hawk drone was shot down.

“I don’t want to have war with anybody” but our military is prepared, Trump says at the White House, where he was meeting with Bahrain Crown Prince Salman bin Hamad Al Khalifa. Furthermore, the president said the US is not looking at retaliatory options until he has “definitive proof” that Iran was responsible for attacks on Saudi Arabian oil facilities.

Still, Trump told reporters in the Oval Office that the US “is prepared” if the attacks warrant a response.

Also notably, when asked if he has promised to protect the Saudis, the president responded “No, I haven’t promised the Saudis that… We have to sit down with the Saudis and work something out.”

Moreover, the stunning lack of support from Europe and the rest of the world makes it incredibly suspect that the story that we’ve been told to date, just like with the Global Hawk drone, is anything close to the real one.

I guess we’re not even trying to get Europe on our side to form ‘coalitions of the willing’ anymore.

And it seems Trump may believe that as well.

In the end, as always, we should be asking the most salient question surrounding this attack.

Because it certainly isn’t Iran. 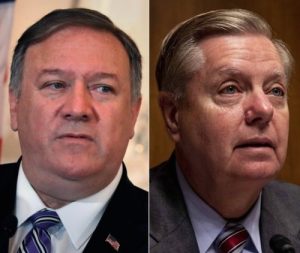 But we know who. The bombs had barely hit their targets when AIPAC’s favorite son, Lindsay Graham (pictured right), was out in full throat for war. Secretary of State Mike Pompeo told the world Iran was behind 100 strikes of this kind.

Not a shred of evidence. And Trump’s first response was to subordinate U.S. troops sworn to uphold the Constitution and defend the U.S. to the terrorist-funding, repressive regime in Saudi Arabia to do what, exactly?

The U.S. frackers need $60+ and zero-bound interest rates to keep the red ink flowing just slow enough to get yield-starved pension funds to bite on the next round of unpayable loans.

Israel needs a strong alliance and U.S. presence in the Middle East lest it have to act like a normal country by respecting its borders and making nice with its neighbors now that it has been exposed as one of the chief architects and supporters of the project to turn Syria into a failed state run by Takfiri crazies and anyone else no one wants in their back yard.

But the biggest question of all in this is simple. How dumb do these people think we are?

We can read licence plates from space, but we can’t tell where a swarm of missiles that hits one of the most strategically important pieces of real estate in the entire world came from?

Whenever a major incident like this happens, there’s always this ridiculous fog of war over what happened to obfuscate reality and blame the current enemy of the empire.

The truth is that the Houthis could have pulled this off with help from Iran, and there’s little to stop it from happening again and again. They proved their point a few weeks ago.

The Saudis have lost in Yemen. They are now losing a helluva lot more than that.

Iran is serious about taking everyone’s ability to sell oil off the table if they are denied.

Why should anyone be surprised that the Houthis want to cripple Saudi Arabia for its disastrous war and Iran wouldn’t want to assist them in doing so?

Moreover, why isn’t their response justified given the blatant aggression against both?

When is someone in D.C. going to finally realize there is no winning play with Iran anymore – except peace?

Perpetual Debt Slaves: This Is the True Face of the EU 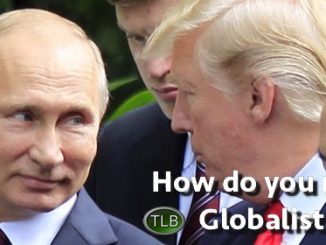 Merkel goes to Moscow: Agreement that Iran Nuclear Deal should be Preserved By All Means [VIDEO]