ER Editor:  Here’s a twofer, from RT and Zerohedge. As usual, Putin’s got this. See also Vladimir Putin dismisses Greta Thunberg as a ‘poorly informed teenager’ and says: ‘Go tell developing countries why they should continue to live in poverty and not be like Sweden’ from the Daily Mail and this from the Moscow Times, Putin Slams Climate Activist Greta Thunberg’s UN Speech. Of note, very few western media outlets have picked up this story.

‘She is kind, but emotions should not control this issue’: Putin takes on Greta Thunberg’s UN rant about climate & world powers

Swedish climate activist Greta Thunberg has earned accolades from world leaders for her emotional speeches. While cheering her as a person, Vladimir Putin still stayed cautious, saying he doesn’t “share the common excitement.”

“How dare you!,” the 16-year-old campaigner scolded world leaders. “We are in the beginning of a mass extinction, and all you can talk about is money, and fairy tales of eternal economic growth.”

Thunberg’s lecture earned her praise from politicians and the media, but Russian President Vladimir Putin is not among them.

“I may disappoint you but I don’t share the common excitement about the speech by Greta Thunberg,” he told an energy forum in Moscow on Wednesday.

“No one has explained to Greta that the modern world is complex and different and … people in Africa or in many Asian countries want to live at the same wealth level as in Sweden,” he continued.

“Of course, emotions are inevitable, but still if we want to be effective, we must stay professional.”

Thunberg’s eco-activism has been criticized before for focusing on the Western world, while ignoring the damage being done to the environment by less wealthy countries going through their own industrial revolutions.

While young environmentalists should be supported, “when someone is using children and teenagers in personal interests, it only deserves to be condemned,” the leader argued.

“I’m sure that Greta is a kind and very sincere girl,” Putin added.

“But adults must do everything not to bring teenagers and children into some extreme situations.”

While Thunberg’s solitary school walkout last year has since evolved into thousands-strong ‘Fridays for Future’ protests worldwide, her activism has drawn criticism for its apparent alarmism, as well as mockery from US President Donald Trump. Thunberg herself has said that this backlash proves her message is “too loud to handle.”

Yet, critics also pointed out that the teenager has failed to present any clear steps on how to change the situation.

Putin Shames Greta Thunberg And Her Handlers Over Environmental Agenda

“Sure, Greta is kind, but emotions should not control this issue,” said Putin.

“Go and explain to developing countries why they should continue living in poverty and not be like Sweden,” he added, before saying that it was deplorable how some groups are using Thunberg to achieve their own goals. 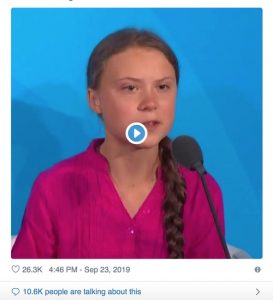 In her speech last week, Thunberg lashed out at the United Nations – saying “You have stolen my dreams and my childhood with your empty words.”

Thunberg also filed a legal complaint accusing five countries of inaction on global warming – drawing the ire of French President Emmanuel Macron, and many others who noted that she’s left China out of her diatribes and lawsuit, despite being the world’s worst polluter by total volume. 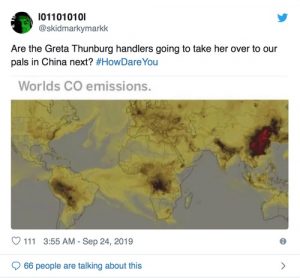