Sayeeda Warsi, who resigned her cabinet post over the UK government’s failure to condemn Israel’s assault on Gaza, has called for British volunteers for the Israeli army to be treated as foreign fighters and prosecuted on their return to the UK. The former foreign office minister, who now holds the title of baroness in the House of Lords, seeks to close a loophole she says is designed to protect Israel. It distinguishes between Britons who fight for state armies like Israel and Pakistan, and those who fight for non-state groups like Kurdish and militant organisations.

In an interview with the Middle East Eye, Warsi said: “One of the questions I asked the Foreign Office was that we have a distinction between state actors and non-state actors.

“The only reason we allow the loophole to exist is because of the IDF [Israel Defence Forces], because we are not brave enough to say if you hold British citizenship, you make a choice. You fight for our state only. That has to go out strong.”

Warsi, the UK’s first female Muslim cabinet minister, said that while public debate focused exclusively on demanding loyalty from British Muslims, the same rule should apply to all.

“You have to belong to something and belonging to Britain for Muslims is a thing we talk about a lot,” she said. “We don’t talk about it in relation to other communities. We accept that other communities hold multiple identities. Let’s just shut down this loophole. If you don’t fight for Britain, you do not fight.”

Dozens of British citizens are currently volunteered to the Israeli Army (IDF) through its Mahal programme. A spokesperson for Mahal told MEE that the exact number was a state secret and referred enquiries to the Ministry of Defence.

Warsi told MEE that she believed Israel had committed war crimes in its attack on Gaza in 2014 when she was part of David Cameron’s coalition government. More than 2,200 Gazans were killed during Operation Protective Edge and 10,000 wounded.

“I fundamentally believe that our policy towards Israel is flawed,” she said. “If you go back to statements that [then-foreign secretary] William Hague made, at the time of the recognition of Palestine as a state, the government said not now, maybe in six months’ time.

“Now we are four or five years forward. What’s changed? The settlements are still being built. There is no formal recognition [of Palestine], the peace process is no further forward. The reality on the ground is changing.”

Theresa May, she said, had shown a “real lack of moral courage and leadership” by failing to attend the Paris peace conference in January and blocking the EU from adopting its closing statement. Warsi said: “When you have colleagues who stand up in parliament and deny the right of Palestine to exist, as Rob Halfon [Conservative MP for Harlow] did when he said that Palestinians can live in Jordan, that’s denying Palestinians a right to exist. All sorts of legitimate opposition to current Israeli government policy are now being seen as illegitimate.”

Speaking about the publication of her book The Enemy Within, Warsi addressed for the first time her decision to resign. She said she anguished over her relationship with Cameron and that, had William Hague still been foreign secretary, then she might not have gone. But she said that then-foreign secretary Philip Hammond’s lack of interest in human rights made it a “whole lot easier” for her to quit.

‘People were tabling questions on Gaza on a daily basis, as the situation was escalating, and I had to repeat government lines’

“I was being sent off to the House of Lords also on a daily basis. People were tabling questions on Gaza on a daily basis, as the situation was escalating, and I had to repeat government lines. It came to the moment when I said enough is enough.

Cameron: From liberal to neocon

In her book, Warsi reveals how her special adviser was approached by a member of the Conservative Party to spy on her.

Warsi refused however to name the person involved. “I don’t want to name names,” she said. “He wasn’t a civil servant. He wasn’t actually security cleared. He was not government, just an ordinary private citizen.” She said she had no idea who sent him, but was sure it was not Cameron. “They asked him to keep an eye on me, on whom I saw, and whom I did not see.” Warsi said that Cameron turned from a liberal on the issue of British Muslims to a neoconservative – and for that she blamed Michael Gove, the then-education minister.

It was the Spectator columnist Douglas Murray who called Warsi “the enemy at the table” – but the split in cabinet was evident.

“It is a well-known fact that there was a tussle between my view, which is that radicalisation is not all about ideology, that there are many journeys to radicalisation and the opposing view that it is about ideology,” she said. “There was a difference of opinion between where government policy was going, and people like me, Ken Clarke, Dominic Grieve and Nick Clegg. Of those I was the only Muslim.”

Of Murray she said: “Douglas Murray called me the enemy within. He thinks there is a terrorist behind every chair. He has a view that every Muslim is part of the problem.”

While Warsi said she trusted the intelligence services for their “evidence-based “ approach, the gap grew between her and her cabinet colleagues.

‘It is a well-known fact that there was a tussle between my view, which is that radicalisation is not all about ideology… and the opposing view that it is about ideology’

Today she accuses May’s government of disengaging with British Muslims and of being unable to treat their representatives in the way in which they treat the leaders of Britain’s other faith groups.

“One of them is how we do festivals and how we do celebrations. A Muslim [invite] list is sent off to all sorts of people to check and double check. We do not do that for anybody else. There is a reality, it has to be documented,” Warsi said.

And she fears for the the future: “I suppose I grew up in a racist world. I have done my bit. My grandfathers both served in the British Indian army. My parents broke their backs in Dewsbury. I served my country at the top table. How many generations are going to give their loyalty before you stop saying to us ‘prove you are loyal’.

David Hearst is the Editor in Chief of the Middle East Eye. He left The Guardian as its chief foreign leader writer. In a career spanning 29 years, he covered the Brighton bomb, the miner’s strike, the loyalist backlash in the wake of the Anglo-Irish Agreement in Northern Ireland, the first conflicts in the breakup of the former Yugoslavia in Slovenia and Croatia, the end of the Soviet Union , Chechnya, and the bushfire wars that accompanied it. He charted Boris Yeltsin’s moral and physical decline and the conditions which created the rise of Putin. After Ireland, he was appointed Europe correspondent for Guardian Europe, then joined the Moscow bureau in 1992, before becoming bureau chief in 1994. He left Russia in 1997 to join the foreign desk, became European editor and then Associate Foreign Editor. He joined The Guardian from The Scotsman, where he worked as education correspondent.

Peter Oborne was named freelancer of the year 2016 by the Online Media Awards for an article he wrote for Middle East Eye. He was British Press Awards Columnist of the Year 2013. He resigned as chief political columnist of the Daily Telegraph in 2015. His books include The Triumph of the Political Class, The Rise of Political Lying, and Why the West is Wrong about Nuclear Iran. 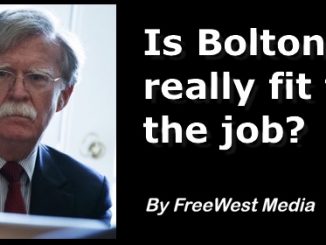 Trump advisor Bolton coordinated US strike on Syria with Israel

Israel Has “The Most Moral Army in the World”? On Which Planet?