It is her nation’s duty “to defend the Cross, not the Crescent,” Polish parliamentarian Professor Krystyna Pawłowicz (shown, hands upraised) boldly proclaimed recently. And furthermore, she implied that Germany was doing quite the opposite, saying that it was actually going to great lengths to “cover up the crimes of their Arab guests,” reports Breitbart. 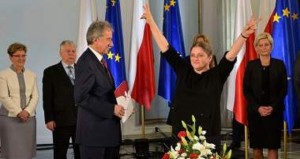 While Pawłowicz was responding to the July 24 murder of a Polish woman in Germany by a Muslim, this isn’t the first time she and her fellow Law & Justice Party statesmen have locked verbal horns with their western neighbor. In January, Pawłowicz called for a boycott of German products after “Martin Schulz, the German president of European Parliament, likened the party’s ruling style to a ‘coup,’ prompting Law & Justice leader Jaroslaw Kaczynski to evoke Nazi-era references,” reported Bloomberg at the time. The European Union has reacted to Poland like a vampire to a cross ever since Law & Justice — an anti-EU, anti-immigration party that endeavors to restore traditional values — won the nation’s October elections. In fact, the European Commission decided to investigate legislation enacted by Law & Justice after EU members accused the party of “jeopardizing the bloc’s democratic values,” as Bloomberg put it.

Yet Pawłowicz isn’t the first to recognize Germany’s coverup of Muslim crime. For example, it had been revealed earlier this year that the North Rhine-Westphalia government (in Germany) ordered the coverup of the wide-scale New Year’s Eve Cologne migrant sex attacks on women; in fact, the Cologne police had actually been forced to remove the word “rape” from their initial reports. The mainstream media was complicit, too, happily peddling the falsehood “that ‘only three’ of the suspects involved in Cologne’s mass migrant rape on New Year’s Eve were recent migrants or refugees,” Breitbart informed, a claim later refuted by the city’s prosecutor.

Yet Germany isn’t the only offender, and it’s perhaps not even the worst. Just consider the handling of a Muslim child-sex ring in Rotherham, England. In this case, Muslims were allowed for 16 years to abuse native British girls — 1,400 in total — who were “trafficked to other towns and cities in the north of England, abducted, beaten, and intimidated,” reported the Associated Press. Why this “hear no evil, see no evil, speak no evil” attitude? Essentially, British authorities were afraid of being branded “racist” (even though “Muslim” isn’t a race). In fact, one British official who attempted to blow the whistle was forced into “diversity training” and told, “You must never [again] refer to Asian men,” and your “awareness of ethnic issues” needs to be raised. Note that “Asian” is how Muslims are often identified in the U.K. 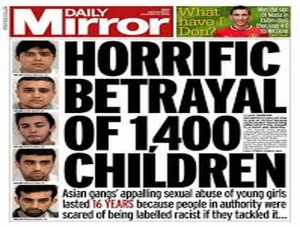 At times the effort to obscure the nature of Muslim crime smacks of childishness and sad comedy. When CBC News recently reported on sexual attacks on women by Halifax, Nova Scotia, cab drivers, it wrote, “Police say the attackers are men, mostly with dark hair…. Most spoke with an accent and many had moustaches.” This beating-around-the-bush description prompted Jihad Watch’s Robert Spencer to quip, “Hmmm. Dark hair, accent, moustache — what could they possibly have in common? … It’s a complete mystery!” And we might also wonder why authorities identified the assailants as men. Couldn’t this evoke anti-male sentiment? What was wrong with describing them as chest-hair-replete sentient bipeds?

Yet this is an example of there being truth behind a joke. Writing in January about the politically correct environment in Sweden, the Spectator reported, “An article in Aftonbladet, Sweden’s largest tabloid, argued that it was racist to point out that the perpetrators in Cologne had been described as North African or Arab, since German men had carried out sexual assaults during Bavaria’s Oktober-fest. Another Aftonbladet article said that reporting on the Cologne attacks was bowing to right-wing extremism. Over the last week, we have been told over and over that the real issue is men, not any particular culture — that Swedish men are no better.”

Yet this is simply untrue. And consider: People almost universally agree that any problem with Muslim crime would be a matter of belief, not anything inherent. But unless someone would contend that “men” have a different culture from women, saying the “issue is men” seems to imply some innate defect. Thus, here’s the standard at work: It’s somehow wrong to tell the truth about Muslim crime because this can damage Muslims’ image. In an effort to salvage that image, however, it’s okay to lie about men and damage their image by casting them as fatally flawed.

Given this mentality, is it any wonder that in 2004, Sweden’s Left Party (its actual name) proposed a “Man Tax,” a special levy on men that would compensate society for the costs of male violence? (As I once said, I’ll happily pay a Man Tax — just as long as I can deduct it from my royalty check for all the lifesaving/enhancing fruits of male ingenuity.)

But whether Aftonbladet is a man or a mouse, it has nothing on its nation’s authorities. As the Spectator also informed, citing Muslim crime at an event and the subsequent coverup, “Stockholm police were warned not to give descriptions of the [Muslim] perpetrators lest they were accused of being racist.” Of course, the authorities had a good explanation for their reticence. The Spectator again: “As Peter Ågren, police chief in central Stockholm, put it: ‘Sometimes we do not dare to say how things really are because we believe it will play into the hands of the Sweden Democrats” (Sweden’s anti-immigration party). Shocking. The Swedish police are now acting as campaign facilitators.

So now we see why Pawłowicz complained of Germans who not only “cover up the crimes of their Arab guests” but will “even shift the blame upon themselves.” And most striking are the personal coverups. Consider left-wing German politician Selin Gören, who, after being raped by three Muslims, initially told police that she was mugged by three German speakers because she didn’t want to “encourage racism.” There was also the 28-year-old Swedish woman who, after being raped aboard a train by an Iraqi last year, didn’t want to report the crime “because she ‘felt sorry for him’ due to his ‘difficult situation’ and feared that he would be deported back to Iraq,” reported Infowars. Then there was Norwegian Socialist Left Party member Karsten Hauken, who was forcibly sodomized by a Somali migrant. Hauken, who describes himself as an ardent “feminist and anti-racist,” regretted that his attacker had been sent back to Somalia and said that the Somali “is not responsible for his actions” and is merely “a product of an unjust world,” Breitbart told us in April. As they say, you just can’t make this stuff up.

As for the governments, why do they engage in such coverups? Well, when you market something, you obscure its bad points and tout its supposed good ones. Only, these governments are marketing multiculturalism. And with the model failing all around them, they’re intensifying their advertising campaigns to try and sell their Edsel. The only question is, how long will it take for European peoples to realize that their socialist leaders are unsafe at any speed?

Selwyn Duke is a writer, columnist and public speaker whose work has been published widely online and in print, on both the local and national level

Swedes are Fleeing their Municipalities, Even the Country 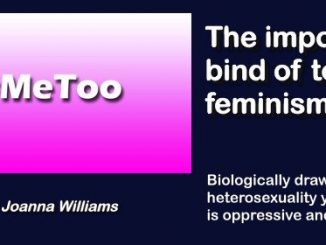 #MeToo in an Age of Heterophobia