ER Editor: We only take issue in this piece with the cause of the fire. It is perfectly normal that WSWS would want to see the fire purely as a result of government cutbacks and in this precise case, understaffing, and they may indeed be partly correct. But video footage showed someone on the roof about an hour and a half before the fire started, lighting something up. Plus the government has had an interest for quite some time in rebuilding Notre Dame so that certain uber-rich French entrepreneurs can privatise parts of the new complex. See also this piece by Thierry Meyssan, Notre Dame: the Largest Real Estate Transaction in Europe has Begun in Paris.

The article below indicates that a new staff member had only started about 3 days before the fire, and ended up being the only one on duty to detect the location of the fire in a complex system of fire detectors. All of which metaphorically smells. Here is the brief, rather fuzzy video showing two individuals walking freely on the roof, one of whom lights something up, around 1.5 hours in advance of the blaze:

In the more than three months since the April 15 fire that devastated and came close to destroying Paris’ historic Notre Dame cathedral, evidence has continued to mount that the fire was the outcome of systematic cutbacks and negligence on the part of the French government.

At the same time, Paris authorities are covering up the health dangers posed to the local population, particularly children. The fire caused almost 400 tons of lead roofing to be carried away by smoke onto nearby schools, maternity centers, houses and sidewalks. 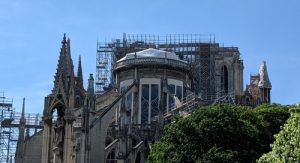 Notre Dame in the aftermath of the April 15 fire

It was not until May 13, almost a month after the fire, that the Paris municipality, run by Socialist Party (PS) mayor Anne Hidalgo, organized the first lead contamination tests. A report published by Médiapart on July 18, based on access to the reports, revealed that “while the rates were more than the required threshold, the authorities did not communicate them, placing in danger those near the [Seine] river and nearby factory workers.”

According to a 2016 advisory by the General Health Directorate (DGS), a concentration of 70 micrograms of lead per meter squared (μg/m2) “signifies a risk of lead poisoning to exposed children.” Lead poisoning causes severe permanent brain damage in infants.

Out of 196 tests, 31 showed levels equal to or greater than the 70 μg/m2 threshold, the report states, and sometimes 10 times more. In one school’s dining room, windows were found to have lead levels of 4,773 μg/m2.

The local administration has not taken any steps to reduce these levels and has only recommended blood tests for pregnant women and children under seven. Speaking to Médiapart, Arnauld Gauthier, an official from the city’s Health Department, denied the levels were excessively high, arguing that regulations really require a lead concentration of 1,000 μg/m2 before an area is considered dangerous.

This is a lie. This latter level is not used for inhabited buildings. It is actually used to test the safety of recently completed industrial construction projects. In fact, DGS regulations state that if an inhabited building, such as a school, is found to have levels above 70 μg/m2, it requires a deep cleaning. Nonetheless, when asked whether the schools would be appropriately cleaned over the summer break, Gauthier replied that nothing beyond the regular summer cleaning was planned.

Annie Thébaud-Mony, a researcher at the National Institute of Health (Inserm) described Gauthier’s statement as a “criminal lie.” Médiapart also reported that the mayor’s office tried to qualify parts of the report before it was released.

The city government has also manipulated figures by only considering averages—despite the fact that this still too violates the 70 μg/m2 limit set by the DGS. A child only needs to be exposed to a small amount of highly concentrated lead dust to be seriously harmed.

According to the World Health Organization, children absorb four to five times the same amount as an adult, and typical child-like behavior drastically increases the risk of their hands and mouth being exposed to poisonous levels of lead. A significant risk is posed by a high concentration of lead in a small area regardless of the average. To guarantee total safety, a thorough but relatively inexpensive wet cleaning would have to take place in all of the affected areas.

Speaking anonymously, the head teacher of one of the contaminated schools described her disgust with the mayor’s office:

“It’s terrible. How could they lie so seriously? Along with the parents of the students, we asked for clarification at a school council, but we remained unanswered. It was unclear. We were even surprised that the school was not closed the day after the fire.”

The French government was finding it increasingly difficult to maintain its lies in the face of the growing opposition of parents, scientists and teachers. Le Monde reported on Friday that, as a token measure, the government had temporarily closed a kindergarten and elementary school near the cathedral.

This is only part of a continuing cover-up. Emmanuel Grégoire, the deputy mayor of Paris described the closures as purely precautionary. According to Le Monde, lead levels in the schools were even higher than previously recorded, exceeding 5,000 μg/m2. Children, staff and parents have been exposed to these dangerous levels for two months, while local authorities assured them that these areas were perfectly safe.

The ongoing exposure of the criminal negligence of French authorities for potential lead poisoning in Paris comes amid mounting evidence that the fire was caused due to the socially destructive austerity policies of the French ruling class.

On July 17, the New York Times published a report based on interviews with staff at the cathedral, revealing numerous examples of mismanagement before the disaster. The cathedral’s fire safety system was highly complex. Upon the detection of a fire, a code was given which employees then had to cross reference to 160 detectors throughout the structure.

At the time of the fire, the lone employee manning the system had begun working three days previously, and was beginning his second straight shift because his replacement did not arrive. He was unable to correctly determine the location of the fire. By the time it was finally detected, it was out of control.

According to Le Canard Enchainé, before recent cuts, the system was watched over by two employees. This means that while previously, one employee could have monitored the detectors while the other went to check the source of the fire, no one was able to monitor the cathedral while the lone guard sought to locate the blaze.

The same report details the perilous efforts of firefighters to contain the blaze. Many were in the building when the 750-ton wooden spire collapsed. Due to a leaking pipe on an external platform, multiple firefighters were forced to enter the southern tower to combat the blaze that was threatening the bells in the northern tower. Had these efforts failed, and the bells fallen, their weight would likely have brought the entire 13th-century structure to the ground.

These revelations of state culpability and negligence both before and after the fire underscore the reality that the April 15 fire demonstrated the socially destructive policies of the political representatives of the French corporate and financial elite, and its reckless subordination of every aspect of social life—including the safety of the working class and cultural institutions—to their personal enrichment.

Having done nothing for years to meet the cathedral’s pressing funding needs, the ruling elite pledged donations just after the fire, casting themselves as benevolent protectors of human culture. On July 18, the Guardian revealed that the vast majority of the €600 million [$US669 million] pledged by prominent billionaires has yet to be received. Despite recently becoming the world’s second richest man, with a net worth of over $104 billion, Bernard Arnault has only given €10 million of the €200 million he pledged. (ER: this ranking of wealth fails to take into the account the wealth of families such as the Rothschilds, the British royal family and many others.) 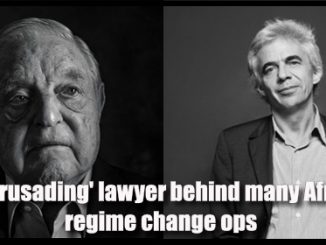 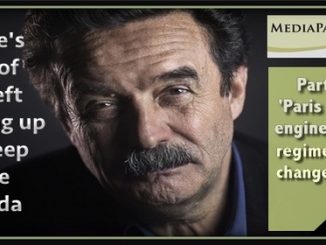 The Real Censors and Manipulators of the French Media