It was only a matter of time before US President Donald Trump got the recognition he deserved for America’s military exploits these past two weeks. Yesterday, Trump received glowing praise from the official international ISIS newspaper, Al Naba, highlighting Washington’s assassination of Iranian IRGC’s General Qasem Soleimani on January 3rd.

In an ideal world, this latest endorsement by ISIS for Trump’s actions should really put to rest the well-worn Washington and Israeli propaganda talking point that Soleimani was an “evil and deadly terrorist.” Unfortunately, the current American political discourse is so thoroughly coated in layers of political fiction that this might take a while to sink in.

One only has to take a cursory look at reports over the last few years to quickly realise exactly how valuable the Iranian military and its celebrated general were in the global war on terror. Yet, this reality is mostly lost on US war hawks and America’s Conservative punditry class.

In her recent reporting, BBC Monitoring editor Mimi Al-Lami described how Islamic State terrorists are now “thanking God,” that the US and Iran are busy targeting each other, and “indifferent to the impact it has on their mutual fight against the Islamic State.” 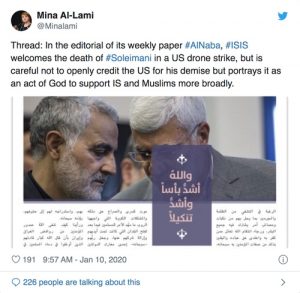 The inconvenient fact that Soleimani was actually leading the fight against ISIS in Iraq and Syria between 2014 and 2018 has been carefully airbrushed from most US media coverage and commentary. But this wasn’t always the case. Even leading pro-war outlets like CNN admitted as far back as 2015 how US military officials acknowledged the pivotal leadership role played by the Iranian Quds Force commander – which helped turn the tide against the deadly terrorist wave.

Retired US Army General and Chairman of the Joint Chiefs of Staff, Martin Dempsey, also praised Iran and Soleimani’s role in the fight against ISIS in Iraq and in particular, in the Battle of Tikrik, calling it ‘a positive step’. Newsweek said at the time, “without Iranian assistance and Soleimani’s guidance, the offensive on Tikrit may not have been possible.”

US Army Lt. Col. Robert Maginnis reiterated the praise for Soleimani back in November 2014, explaining, “The fighting that’s going on now in Iraq [against Islamic state] quite frankly has been led by General Soleimani, the Quds Force out of Tehran.” 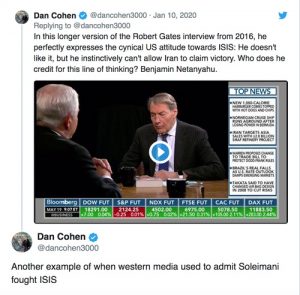 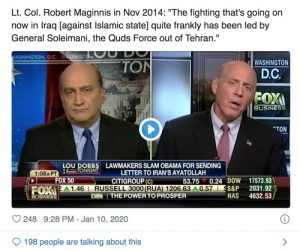 Despite all of this, the rabid calls for military intervention dominate the Beltway’s bellicose conversation. Behind Trump and US Secretary of State Mike Pompeo, are perennial Republican hawks like Sens. Lindsey Graham (R-SC), Marco Rubio (R-FL), Tom Cotton (R-AR) and Ben Sasse (R-NE), all of whom have been crowing endlessly about their seemingly great acheivement following the US drone attack which was carried out near Baghdad International Airport on Friday January 3rd. Their narrative is all but baked into any commentary after the fact, mainly to somehow justify what the White House has just done. The reclassification of Soleimani as a “terrorist” – and not someone who was instrumental in fighting terrorism, is perhaps one of Washington’s great propaganda successes of recent years.

Now with Soleimani out of the way, ISIS thanked the United States for eliminating one of its most feared adversaries. BBC’s Al-Lami adds:

“It welcomes IS enemies being busy fighting each other, saying it distracts them away from “Muslims” and drains their energy which, it adds, benefits jihadists.”

“The killing of Soleimani “has created changes in the path of the Crusader campaign against the Islamic State and its soldiers, which we believe is part of God’s support for His patient mujahidin.”

Coming to grips with the actual reality on the ground in the region may be out of the scope of understanding of American neoconservative war hawks, who generally view the Middle East in terms of  binary and sectarian paradigms like Israel vs Muslims, or Shia vs Sunni. Hence, it may take a while longer before any of this can filter through into the collective consciousness of a highly propagandized 21st century American society. For Trump’s MAGA cult followers, this cold reality will be even more difficult to grasp, and may never penetrate this group’s membrane of cognitive dissonance.

The loss of Soleimani in the war on terror was echoed by Rev Ibrahim Nseir, a pastor and leading Christian voice in the Middle East from the Arab Evangelical Presbyterian Church of Aleppo, who said, “All what Qassem Soleimani did was stand up for Christians against ISIS and Al Qaeda.” 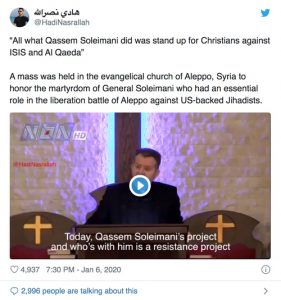 Based on the terrorist group’s recent statement, General Qasem Soleimani was certainly regarded a mortal enemy of ISIS and al Qaeda in the Middle East, and will no doubt be remembered throughout the region as a key figure in the battle to push back radical jihadist terror.

If ISIS does reemerge, then there’s a risk that residents of the region may also remember Donald Trump’s double assassination of Iran’s General Qassem Soleimani and the Iraqi military’s PMU commander, Abu Mahdi al Mouhendis – for what it truly was, a gift to global terrorism.

Let’s hope the region can eventually overcome these reoccurring pestilences.

Author Patrick Henningsen is an American writer and global affairs analyst and founder of independent news and analysis site 21st Century Wire, and is host of the SUNDAY WIRE weekly radio show broadcast globally over the Alternate Current Radio Network (ACR). He has written for a number of international publications and has done extensive on-the-ground reporting in the Middle East including work in Syria and Iraq. See his archive here. 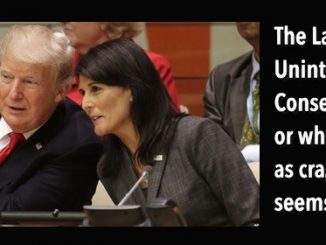 Could the Trump Presidency Prove to be a Godsend for the Palestinians? 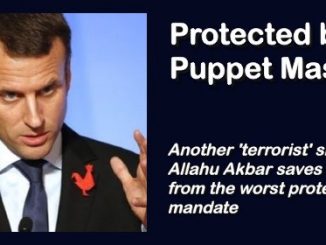 French strikes: ‘I’ve never seen anything like it’ – but guess what happened next … 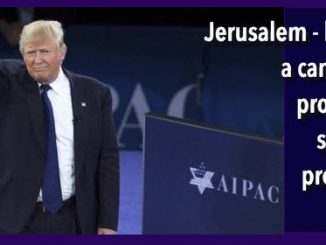